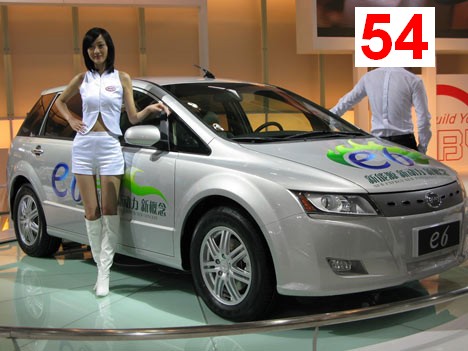 BYD only sold 54 of its E6 EV and only 290 F3DM hybrids from January to October. Eat that, Warren Buffet! Chang’an Auto decided to stop production of the Jiexun HEV after only one year because they “didn’t sell any”. More misery in the article from Global Times (state owned magazine) below:

“The development of new energy vehicles in China has been highly anticipated, but automakers are disappointed with the sales figures of green cars, after having spent millions of dollars in this field.

Due to its poor sales volume, Changan Auto said that its hybrid vehicle Jiexun HEV has gone out of production for one year. “The company didn’t sell any”, a senior executive was quoted as saying about the Jiexun HEV, according to a report in the China Business News on Monday.

In addition, BYD said that it has only sold 54 electric vehicles E6 and 290 F3DM hybrids between January and October. And the sales volume of Toyota’s Prius in China has been below 4,000 units for the past three years.

The Chinese government has released subsidies to boost sales of green cars, but that did not help much. And research company Dratio said that 89 percent of consumers are not interested in purchasing new energy vehicles due to their high price and the lack of supporting facilities.

A sales manager of a 4S store of Dongfeng Honda said that consumers are not buying new energy vehicles because they don’t trust the new technology and they don’t want to pay extra in order to save petrol.

The senior executive at Changan also said that though the subsidies for electric vehicles are as high as 60,000 yuan ($9,024), the subsidies for hybrid cars are only 3,000 yuan – and this has led to the plummeting sales of hybrid vehicles.

One BYD employee said that the government has not offered enough support in this matter.”