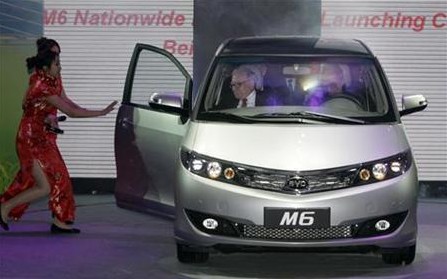 Warren Buffett has a Chinese car problem, and he may be tempted to fix it himself — at a cost of billions of dollars.

At the depths of the financial crisis in September 2008, Buffett bought nearly 10 percent of Chinese car and battery maker BYD Co Ltd, an investment suggested by his partner Charlie Munger and heartily endorsed by his then-lieutenant David Sokol.

Buffett, despite his self-professed ignorance about BYD’s technology, gave the company his seal of approval. It sparked a huge rally and the stock appreciated tenfold within a year, making his $230 million stake worth $2.47 billion.

Fast-forward two years: BYD’s sales are sinking, its international expansion plans are delayed again, the market is questioning its technology and the stock has lost about 80 percent of its peak value.

Meanwhile, Sokol is gone amid a scandal over his personal investments and the U.S. government has raised questions about BYD’s ability to ever sell outside China because of a pattern of allegedly stolen industrial designs, which BYD has denied.

“Warren Buffett is the greatest investor of all time but sometimes he drinks the Kool-Aid. Not selling BYD, he kind of drank the Kool-Aid on BYD,” said Bill Smead, chief investment officer of Smead Capital Management and a Berkshire investor.

Even though Buffett is still up 100 percent on his initial investment, for his Berkshire Hathaway (BRKa.N) conglomerate BYD has become the question that won’t go away.

“I think he probably will put in more money and if the stock keeps falling I think he will buy the company,” said Michael Yoshikami, founder and chief executive of wealth manager YCMNET Advisors, which oversees $1 billion and holds Berkshire shares. “They’re in the right space and over the long period of time it’s going to be a good international play.”

With a market capitalization of about $8.1 billion, based on Thomson Reuters data, BYD would be well within Buffett’s reach and in line with the size of deal he has talked about doing of late.

Buffett’s assistant did not respond to a request for comment.

If he waits, though, it could get cheaper still. Shares in BYD plummeted more than 14 percent on Tuesday after the company warned it could post a third-quarter loss.

“BYD is run by a guy that Charlie Munger has enormous respect for,” said Steve Check, founder and chief investment officer of Check Capital Management and a Berkshire holder. Check also believes Berkshire would be a buyer of BYD shares rather than a seller in the current circumstances.

“I know Munger is just fascinated with the way the company is run and how hard working the employees are,” Check said via e-mail.

BYD was formed by its Chairman Wang Chuanfu in 1995 with money from a relative and, according to one estimate, by 2009 he had become China’s richest man. Munger once told Fortune magazine Wang was like a combination of Thomas Edison and former General Electric Co CEO Jack Welch.

However, its operations have had their fair share of hiccups of late, given China’s tough auto market. Despite BYD’s F3 sedan being China’s best-selling car brand in 2009 and 2010, the company sold only 480 vehicles combined of its F3DM hybrid and e6 electric model.

It has also delayed the U.S. launch of its e6 until 2012 and warned its net profit for the first three quarters may fall 85 to 95 percent.

Yet despite a long-running trend of sales declines, Munger has continued to firmly endorse the company. In early July, when asked at an investor meeting how long he planned to stick with BYD, Munger said he was in “till the end.” Investors say Buffett may be there with him.

“If Warren Buffett still trusts doing business in China, if he does not believe they’re due for a serious cleansing and difficulty, then he might be very motivated to buy the company while the stock is being pounded aggressively like it is,” Smead said.