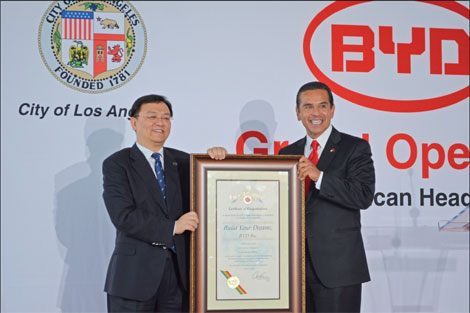 BYD, which stands for “Build Your Dreams”, aims to create 150 jobs in the second-largest American city. Its downtown Los Angeles site will focus on marketing, sales, technical support and product design for the company’s environmentally friendly vehicles, solar panels and battery storage stations.

BYD, who has financial backing from Warren Buffett’s investment firm Berkshire Hathaway and is based in Shenzhen, sells electric vehicles in China and produces its own battery technology. It employs more than 200,000 workers worldwide.

The company topped the Businessweek Technology 100 list last year and was ranked by the publication as the eighth most innovative company in the world.

“Shenzhen is an economic powerhouse and green technology leader in China,” Xu said. “Our partnerships with Los Angeles area leaders will greatly amplify each of our efforts toward a global green future.”

Los Angeles Mayor Antonio Villaraigosa said BYD’s new US headquarters is the latest sign that the city is a growing hub of clean-technology jobs.

“We see BYD’s Los Angeles opening as a catalyst that will usher in good jobs, global investment, and a more sustainable future,” he said.

At the ceremony, the company also announced a partnership with Hertz Car Rental to provide the first long-range all-electric eBUS shuttle from Los Angeles International Airport to Hertz’ rental car facilities. BYD will focus on its electric buses for now, although it has plans to bring in electric vehicles like its e6 sports utility crossover to the US public, according to blogdowntown.com, a community news website for downtown Los Angeles.

Xu, who is currently touring the US to meet with American business and government leaders, will be in New York City on Wednesday and Thursday. He is expected to meet with New York Mayor Michael Bloomberg and sign a series of Shenzhen-US business development agreements. There will be a celebration of the joint venture of BYD and Hertz on Thursday afternoon in Manhattan, followed by a dinner hosted by BYD that evening.