China auto sales fall in the first two months of 2012 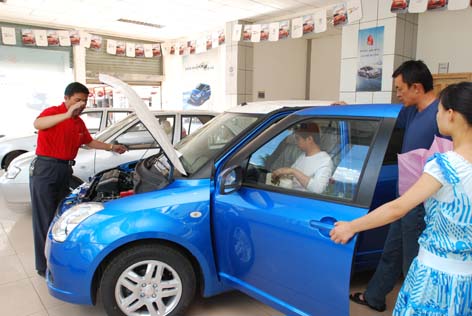 China’s vehicle sales weakened further in the first two months of this year as the economy slowed and higher fuel prices deterred some buyers. The China Association of Automobile Manufacturers said Friday that car sales in January-February fell 4.4 percent from a year earlier to 2.37 million vehicles. Total sales, including trucks and buses, dropped 6 percent to 2.95 million vehicles.

Some 1.21 million passenger cars were sold in February, up 26.5 percent from a year earlier. Total vehicle sales rose 24.5 percent year-on-year to 1.57 million vehicles.

Sales for the two-month period were down despite a big jump in February when demand was boosted by greater number of working days due to Lunar New Year holidays falling in January this year.

Sales so far this year are worse than expected, said Zhang Xin, an analyst at Guotai Jun’an Securities, based in Beijing.

He said February’s sales were partly boosted by vehicle purchases by schools, which are rolling out new fleets of buses after a government crackdown on overloading of school vans following a slew of accidents.

If China does not introduce new “bailout” measures, “I expect sales to be 5 percent lower this year than last, due to the slower economic growth,” Zhang said.

China’s once-sizzling auto market has slowed along with the economy. Rising fuel prices are also helping to keep would-be buyers out of showrooms.

Vehicle sales rose a scant 2.5 percent in 2011 to 18.5 million, and passenger car sales fell 24 percent in January from a year

The lackluster growth after years of double-digit increases is an unwelcome trend for global automakers counting on sales in China and other emerging markets to make up for weakness in the U.S. and Europe.

Foreign automakers have weathered the slump in sales relatively well, helped by Chinese car buyers’ preferences for foreign brand models, analysts say. But they, too, are feeling this winter’s chill.

General Motors Co. reported earlier this week that its sales growth in China slowed to 7.7 percent in January-February from the year before to 487,208 vehicles.

Ford Motor Co.’s sales in January to February fell 16 percent from a year earlier to 71,954.

“January and February are notoriously difficult months. Let’s see what March looks like and we’ll know what kind of year we’re having,” said Michael Dunne, an independent auto analyst.

Ford opened a new vehicle assembly plant at its production base in the southwestern city of Chongqing in February, the first of four new factories due to begin operations by the end of next year.

Like many other automakers, it is banking on the potential for growth in sales in China’s vast hinterland, where most families have yet to buy their first cars and demand is expected to soar with rising incomes.