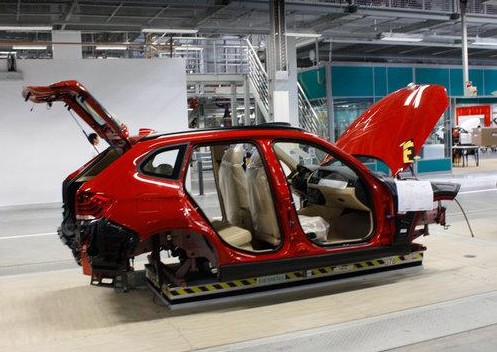 BMW Brilliance Automotive officially opened its new plant in Tiexi district of the Liaoning provincial capital Shenyang on May 24, marking a new milestone in the automaker’s localization in China.

As the newest member of BMW’s global production network, the Tiexi plant combines the advanced technology of today and the environmentally friendly production for which BMW Group is famed. The company said the facility has further enhanced the position of China in BMW Group’s worldwide strategy and the overall strength of BMW in the Chinese premium market.

The investment and development of the world-class plant greatly promotes local economic and social development, said the carmaker’s top executive.

“We have invested a further 500 million euros ($628 million) in China with our partner Brilliance and increase our total local production capacity to 400,000 vehicles in the future,” said Norbert Reithofer, chairman of the board of management of BMW Group.

“China is one of BMW Group’s top three markets worldwide and offers tremendous potential for growth, especially in the premium segment,” he added.

Qi Yumin, chairman of Brilliance Group, said “the development of this new plant is a result of the success of BMW Brilliance and the strong cooperation between shareholders”.

With press, body, paint and assembly lines and affiliated facilities, the new plant covers more than 2 million square meters and was built with a total investment of 1.5 billion euros.

Production at the new plant has started with the recently launched BMW X1 as the first BMW sports activity vehicle produced in China. As planned, the all-new BMW 3 Series will be the second product series from the new plant.

The company plans for its existing plant in Shenyang’s Dadong district to concentrate on production of the BMW 5 Series Long Wheelbase with a projected capacity of 100,000 units in 2012. Combined capacity of the two plants will reach 200,000 units this year.

In the first four months of 2012, BMW Group sold more than 100,000 units in China, an increase of 35 percent from a year ago. China has become the largest single market of the BMW Group worldwide in the first quarter of this year.

Its future-oriented design also gives the new plant high flexibility to meet the need of producing different models and expanding production capacity in the future. Sustainability is also reflected in the facility’s buildings.

The main building uses sunlight, natural wind and optimized positions of the windows that can save 25 percent of electricity and 50 percent of heating energy while reducing overall CO2 emissions by 32 percent and water consumption by 10 percent.

As an important part of the new project, the BMW powertrain plant in Shenyang already started production in March. It mainly produces BMW’s latest four-cylinder TwinPower turbo engine. With current annual production of 200,000 units, it is designed to reach a capacity of 400,000 units a year. It is only the fourth BMW engine plant in the world and the first outside Europe.

Reithofer noted that the company’s production is scalable to meet market demand. “One of our principles is that our production capacity should be smaller than market demand, so we can successfully deal with possible adverse economic conditions in the future,” he said.

He predicted that China’s premium car market will increase sales this year, while maintaining double digit growth. “Demand for small-sized cars in the premium segment will continue to grow rapidly in China,” he said.