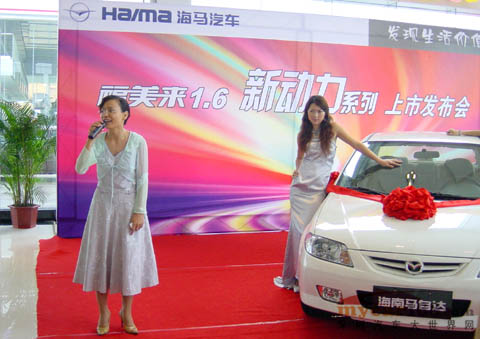 The combined sales figures for passenger cars in China during the first seven months of the year show a year-on-year increase of 5.8 percent to 8.05 million units.

That compares with relatively healthy gains of 9.9 percent and 16 percent in June and May, respectively, due in part to robust sales of new and redesigned models that hit the show rooms consecutively after the Beijing auto show in April.

Vehicle sales (including trucks, buses, etc) in the first seven months came to 11 million, up 3.6 percent from a year earlier.

Despite the slower growth, the auto association reiterated its annual forecast for overall auto sales to grow 5-8 percent this year.

Wang Hongchang from the China Automobile Dealers Association explains that July is the traditional slack season for selling cars, and the frequent storms in North China and sudden purchase restrictions in Guangzhou have exacerbated the situation.

“I think in August the market will witness a milder slide, and then the market should bounce back in September, based on my observation of previous years,” he says.

Despite the recent sluggishness, the market grew modestly year-on-year, mostly because of the remarkable resilience of European brands.

Joint venture companies still rank high on the sales sheet, as anticipated, with FAW-Volkswagen leading the list with 106,544 units in July, followed by SAIC-GM with 97,064 units, and SGMW with 90,268 units. SGMW is a three-way joint venture involving SAIC, Liuzhou Wuling Motors Co and GM China.

Volkswagen’s premium car brand Audi has not released its sales figures in China yet. But in the US market in July, it sold 11,707 cars, a year-on-year increase of 28 percent, the highest in 19 months.

Driven by the strong demand from Chinese and Russian markets, German car manufacturer BMW sold 135,537 cars globally last month (including the Mini and Rolls-Royce brands), 5 percent higher than the previous July, while the accumulated sales during the first seven months reached 1.04 million units, up 7.6 percent.

The Chinese market is still the biggest engine for BMW’s sales growth. In July, BMW Group delivered 23,092 cars in China, up by 22.5 percent.

Sales in the US, however, grew by only 4 percent.

Mercedes-Benz is the only major European automaker to report a sales drop last month. On Aug 3, the company announced that global sales in July went down by 3.1 percent to 97,323 units.

A consolation for the company is that the Chinese market is still growing and has great momentum. Last month, the Mercedes-Benz brand delivered 14,760 cars in China, a modest increase of 2 percent.

During the first seven months, the group (including Mercedes-Benz, Smart and Maybach) sold 119,980 cars in China, 10 percent more than the previous year.

But it seems that not all of these marquee names are getting along with their joint venture partners, despite reporting escalating sales.

At the end of last month, Volkswagen alleged that its Chinese partner FAW infringed its patents for the gearbox and engine, which was said by insiders to be the result of long-existing disagreements over technology transfer forms and stock share allocation between the partners.

In the mid-1980s, when the first foreign joint venture was introduced in China, the government trade-off was the Chinese market for foreign partners’ advanced technologies. But after 30 years, more than half of the Chinese auto market belongs to foreign brands, and Chinese brands have not been catching up as quickly as the government expected on auto technologies.

But there was good news for Chinese brands in July. On the latest list of energy-saving cars (with engine size smaller than 1.6 liters) released on July 11, more than 100 models were selected, with about 60 percent being Chinese.

Consumers can get a 3,000 yuan ($472, 382 euros) subsidy from the government to buy these models, which may boost the sales of Chinese brands in the following months.

It seems that more favorable policies toward the car market are being lined up. Responding to criticism that highway tolls during holiday periods created serious congestion, the Chinese government issued a policy this month to exempt passenger cars with less than seven seats from tolls during major holidays, to take effect from the beginning of October. A total of 20 days in the year will be toll free.

Cui Dongshu, deputy secretary-general of the China Passenger Car Association, says this policy will significantly boost the sales of cars in August and September, when people are preparing for the Golden Week holiday at the beginning of October.

Shi Jianhua, deputy secretary-general of China Association of Automobile Manufacturers, says the Chinese auto market has switched from the high-speed lane to the steady-growth path.

He estimates the yearly growth rate of the market to be 8 percent, with the total vehicle delivery of 20 million. Since more families are buying second cars, mainly for leisure, Shi believes the SUV segment will surge by 30 percent to 2.07 million in 2012.

At the same time, he says, the instability of government policies has hurt the industry, especially the younger and newer Chinese brands.

The sudden announcement of a purchase restriction in Guangzhou at the end of June dismayed the whole industry, and stirred a buying frenzy among the South China city’s residents.

Shi is apparently against these “raids” to rein in cities’ congestion problems. “Instead of limiting the purchase, the government should pay more attention to city planning,” he says.