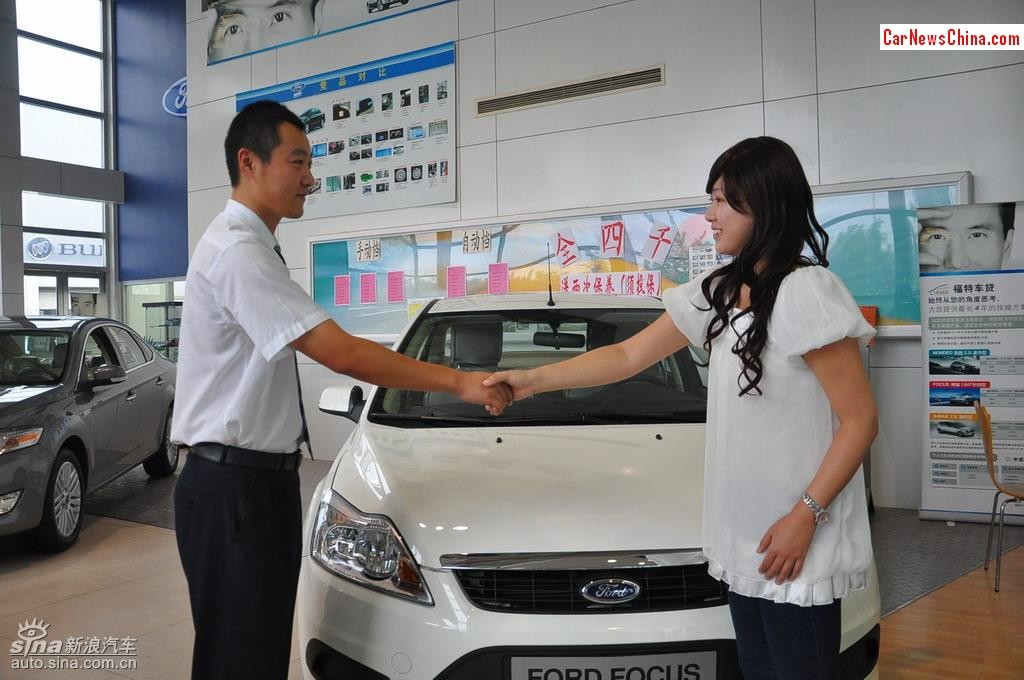 Ford said on Wednesday that its sales in China rose 51 percent, to 647,849 vehicles, through the first nine months of this year compared with the similar period last year. Growth accelerated in September, when Ford’s sales rose 61 percent, to 96,111. The gains have come in a Chinese car market that has cooled recently after years of robust growth.

Although Ford acknowledged that it has a long way to go, the company had been helped by a new product lineup that includes four small sport utility vehicles, the redesigned Focus and the redesigned Mondeo, China’s version of the Fusion sedan, which was introduced this month.

“Ford has been playing catch-up in China with G.M. and VW, but it has been strategic in its battle for more market share,” Namrita Chow, a Shanghai-based senior analyst for IHS Automotive, wrote in an e-mail. “Ford has focused its game on targeting high growth and high volume segments — S.U.V.’s and sedans.”

Ms. Chow said that one bright spot for Ford has been its Focus, a key part of its battle against Volkswagen, the country’s best-selling automaker, for the top midsize sedan. The Focus beat the VW Lavida in August for the first time, and in September sales rose 11 percent to 37,271.

Another bright spot, Ms. Chow said, has been the Ford Kuga, a midsize sport utility, which was introduced this year and has had promising early sales.

For the Asia-Pacific region as a whole, Ford said it had sold 947,555 passenger cars and commercial vehicles, up 31 percent, during the first nine months of the year.

“It’s safe to say, I think, that we will be over a million units next month,” David L. Schoch, group vice president and president of Ford Asia Pacific, told reporters at a news conference Wednesday at Ford’s headquarters in Dearborn, Mich.

The growth comes amid heavy investment by Ford. As part of its $4.9 billion investment in China, Ford and its joint venture partners are adding four assembly plants and three powertrain plants by 2015, over what they had in 2011. Ford also said it planned to double its network of 400 passenger-car dealers and introduce 15 vehicles over the next two years.

Mr. Schoch said that Ford hoped to double its market share in China to 5 percent this year compared with the first quarter of last year. Even if it hits that aggressive target, though, Ford will continue to lag competitors whose shares are in double digits.

Hyundai of South Korea is expected to sell 1.64 million vehicles, up from 1.4 million last year. Nissan aims to sell 1.25 million.

Ford has a better chance of catching up to Toyota or Honda, which are expected to sell fewer than one million vehicles in China this year.

In July, Ford said it recorded its highest pretax profit in the Asia-Pacific region of any quarter. Over all, the region’s second-quarter pretax profit was $177 million, versus a $66 million loss in the similar quarter a year ago.

The automaker’s conservative strategy could pay off in the long run, especially its decision to focus on small and midsize utility vehicles and midsize sedans, Ms. Chow said.

Ford projects that the industry in China, which became the world’s largest auto market in 2009, will grow to 32 million units by 2020, from 21.5 million units now.

Most of the two billion potential buyers expected by 2020 will come from smaller cities in western China, not in the more developed eastern provinces.

Ford also plans to enter another fast-growing Chinese segment, premium vehicles, with the introduction of the Lincoln brand in the last quarter of 2014. The automaker has selected about a dozen dealers so far.