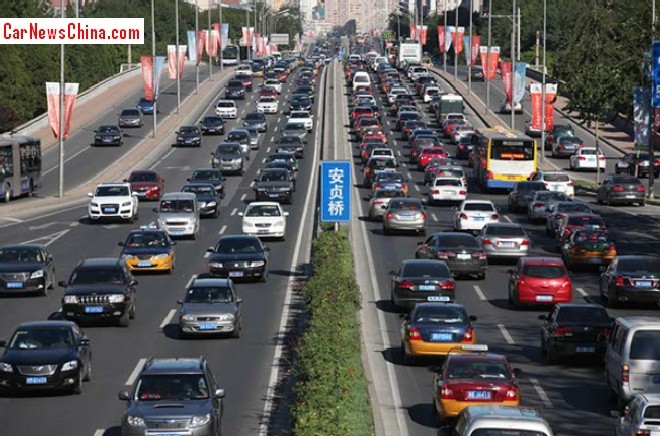 The Chinese capital Beijing is plagued by heavy air pollution end endless traffic jams. The Beijing government is aiming all its arrows at cars and keeps coming up with new plans to limit car use in the capital. The latest plan is a congestion toll for the downtown area, set to start in 2015.

The proposal is included in a task list of Beijing’s five-year action plan on controlling vehicle pollution. Issued last week, the document contains a suite of measures to curb car emissions, such as a reduction of the number of license plates issued, elimination of high-emission vehicles, increase of parking fees and construction of new subways.

Though it’s not the first time that the charge has been brought onto the agenda of local government, and the timetable for real implementation has not been finalized, the problem has still sparked heated debate among the public.

Some say that a fee aimed at combating congestion is acceptable, while some believe that it will fail to solve the traffic problem while only placing a greater burden on ordinary residents.

“When resources are in short supply, it is reasonable to allocate them using price mechanisms,” said Iris Zhao, an editor and also a car owner.

“As more people buy cars, congestion charges may become the only way to ease traffic jam at a certain point of time (when the number of vehicles are too many),” she said.

“Perhaps only by building good public transportation and increasing the cost for driving private car can big cities like Beijing and Shanghai maintain the traffic order in certain areas,” she said.

Wu Qiquan, a small business owner in Beijing, was cautious in giving his opinion.

“Because the government hasn’t introduced a specific plan on how much money it will charge and how the rule will be executed, it’s hard to say whether it’s good or not.”

But he added that he could accept the charge if the final implementation plan proves to be “fair and reasonable.”

Although he has a car, Wu often travels by subway. Yet he often rides line 10, which broke down five times last month and he can’t help complaining about it.

“In addition to increasing the cost of car usage, the government should really improve the current public transportation, making it more comfortable and convenient. Otherwise people will eventually turn to private cars if they can afford the costs,” he said.

Unlike Zhao and Wu, who are part of a group that has an ambivalent attitude toward the possible policy, a number of people criticized the idea online fiercely.

Some complained that they have paid just enough – if not too many – taxes and fees for purchasing a vehicle and won’t bear additional expenses.

Others said that they did not want to pay for traffic jams, and some even went so far as to ask for compensation for congestion. Some also questioned where the money will be used if the government begins charging congestion fees.

Experts said it’s not strange that some oppose the idea and one important reason is the large number of government vehicles on the roads in Beijing.

“People always take London as a successful example of congestion fees, but Beijing is different,” said Zhong Shi, an independent auto analyst based in the capital city.

“Beijing has so many government cars that mostly drive in the center of the city, and congestion fees won’t work in curbing the usage of such vehicles,” he said.

“There are many ways to tackle the congestion problem, but to charge fees should never be a first choice,” he added.