Red Alert in Beijing – Time for a Walk 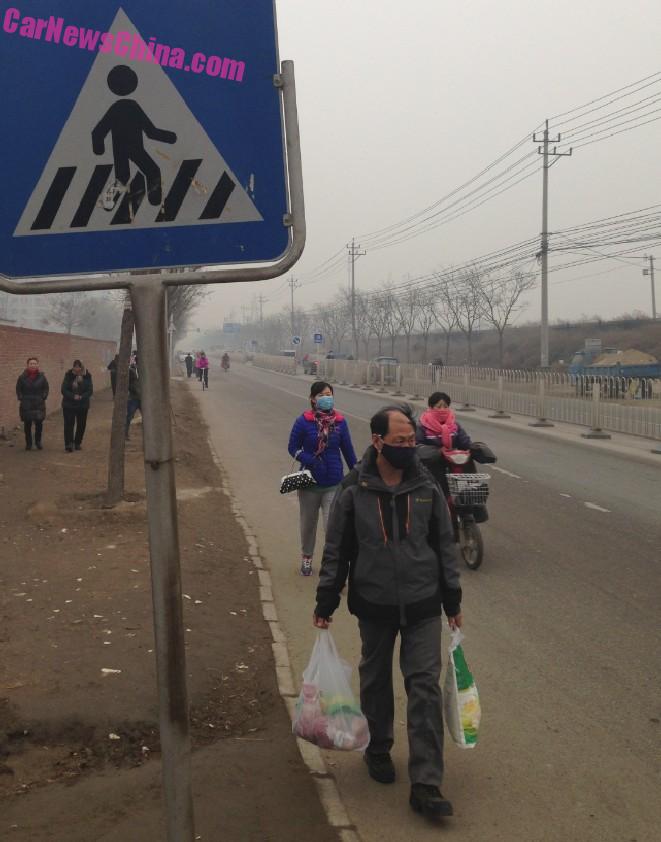 For the first time ever we have a real Red Alert in Beijing, the highest alert for air pollution. The alert will last until Thursday 12:00.  Half of the cars are kicked off the street, trucks can’t enter the city, 30% of the government workers will stay home (nobody will notice that one), all construction has been halted, factories have been ordered to cancel operations, and the kindergartens and schools are closed.

Drama everywhere!, time thus for a walk in the vibrant Dongba area where I live. On the first photo an almost empty street, normally very busy and permanently traffic jammed. But not today. Local residents carry their groceries while wearing their colorful masks. 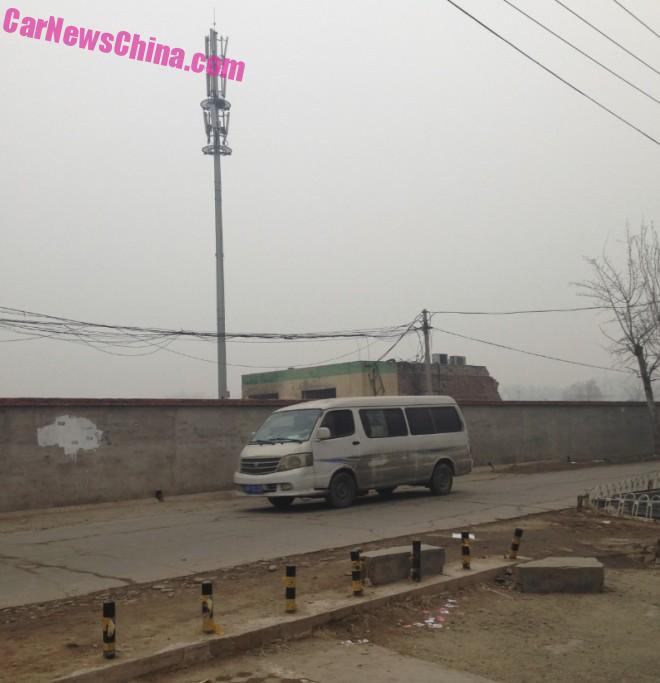 A Jinbei van on a typical local road. Jinbei vans are like cockroaches. You hate them but you can never kill them. They always come back. The Jinbei is the single most common vehicle in every Beijing suburb. When you are on the road and you suddenly see a lot of Jinbei’s, you know you are far out of the center.

The pollution is actually not that bad today, a sweet 365 AQI (Air Quality Index) as I write these very words. But without the alert it would likely be much worse, far over 500, like last week when we topped at 640 or so. The World Health Organization considers everything above 25 (twenty five) unhealthy. 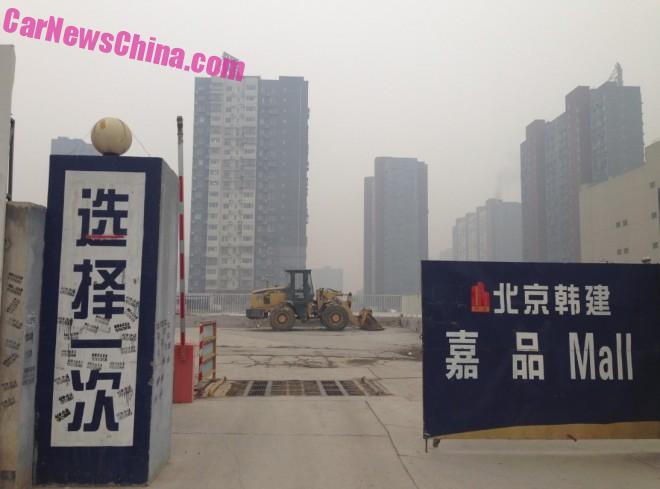 Since 2003 however the area has been designated by the Beijing government as a new residential paradise for office workers working further downtown. Construction started in earnest in 2008 and has continued full speed ever since. Today some 300.000 people live in Dongba, up from 25.000 in 2000. And that is just the beginning, there will be many more housing, malls, and further in the future even a business district, for less commuting, and an embassy district, for what nobody knows. 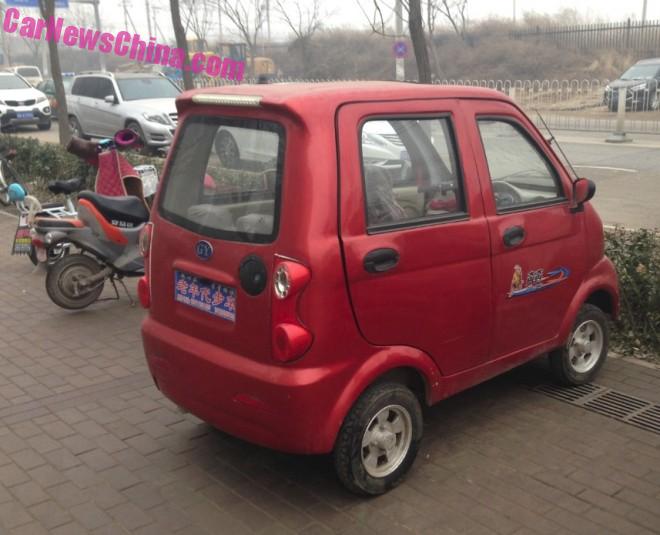 A red four-wheeled LSEV, in red-alert, parked in the electric bicycle parking lane.

Sadly, Dongba is just as dirty as the rest of town. Probably a bit dirtier, because the Fifth Ring functions as the border for the big intercity trucks, of which we have shitloads. Then there is the construction, with all the dust and old machinery, and the diesel-powered tricycles, which are very much not allowed anywhere in Beijing except, it seems, in Dongba. 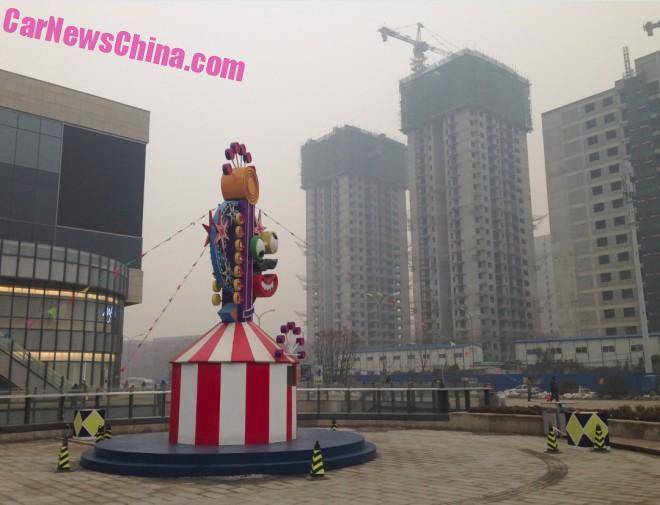 The smiling statue on a small square in front of Dongba’s pride: a new shopping mall, seen here on the left. The mall opened two months ago and I am genuinely happy with it. The mall comes with a Starbucks (really!), a McDonalds that delivers (really!), a Pizza Hut, a whole lot of decent Chinese restaurants, and a proper supermarket. On the other side of the street a large compound under construction. And no matter the red alert, construction was clearly NOT halted. They were hammering away like there was no tomorrow. And maybe there isn’t. Just look at that sky! 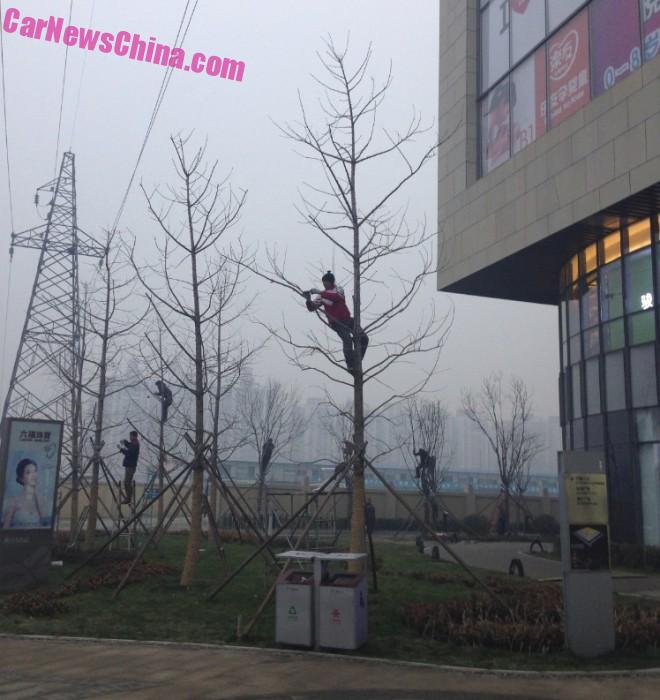 Men working in trees. Cutting branches for the cold winter coming. The winter is late this year after a false start in early November. Today was 10 degrees Celsius, completely absurd, it should be minus five or more. The high temperature and the low wind are one reason the air pollution is as bad as it is at the moment. Other more permanent reasons are:

Coal fired power plants. All the major plants around Beijing run on coal.

Coal fired cooking and coal fired heating on home-level. This is still very common in Beijing, especially in the villages suburbs. Most houses in the villages use coal for cooking and for heating. And not just houses. There is a huge wholesale market nearby my compound, it is heated on coal, fired up in a huge oven right next to the market!

The industry. Many large factories have been moved to Hebei Province, but many others are still around, and checks on the environmental regulations are few and very lacks.

The aircons. Many houses that do not have central heating, and do not use cool because they are too rich for that, use air conditioning systems to heat up in the winter, using shiploads of coal-fired energy and blasting warm stinky air in the air.

The trucks. Zillions and zillions of heavy trucks descend on Beijing every day, carrying the supplies for a 20-million men mega city. The trucks are all old and all dirty. Most come from the outer provinces where nobody cares about clean engines and such luxuries.

The cars. The Beijing government always blames the cars. Lame. 10 million cars is sure not a good thing, but they are in general comparatively clean, as most old and dirty cars have been removed from the streets already.

The tricycles, motorbikes, scooters, and whatever else on wheels.

But in the end, it is just a problem of too many people on too little space. Move half of the population to Inner Mongolia and the problem is solved. At least for a while. 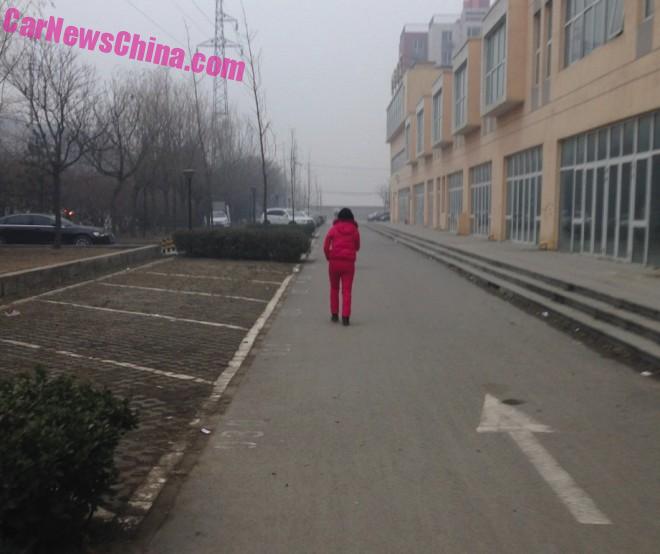 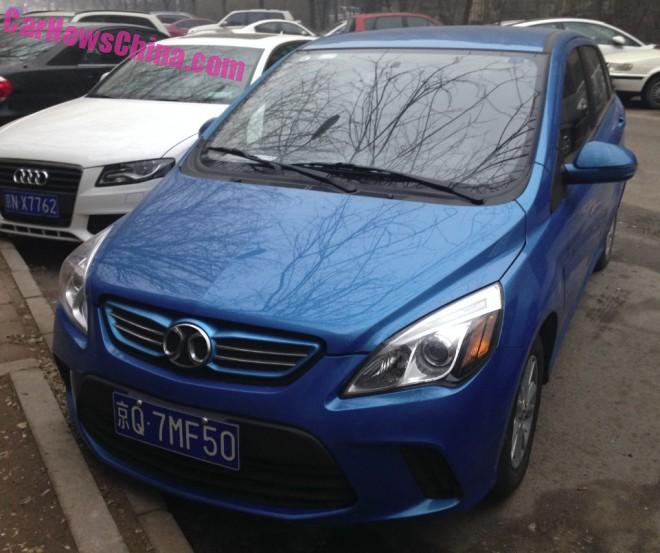 A Beijing Auto Senova EV200 electric car. Very popular at the moment. But it too runs on coal-fired electricity. 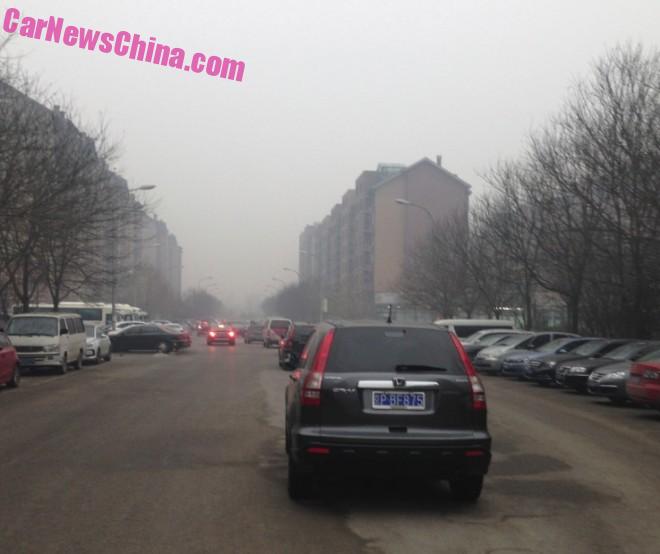 The dynamics inside my compound. It really looks nicer in summer.

As you can see the Honda is parked here exactly on the middle of a street, with many others behind it. This is normal practice here. Residents find the price for the underground parking too steep and put their cars on the street, but there isn’t enough space on the sides so they put their cars in the middle. This road is a public road, with sections of the compound on each side.

A lot of accidents have happened and will happen, mostly involving broken mirrors and bumpers, and angry citizens who can’t get their cars out. Complaining doesn’t help. The compound’s management points at the police because it is a public road, but the police points at the management because the road goes through the compound and all the cars are owned by residents living in the compound. 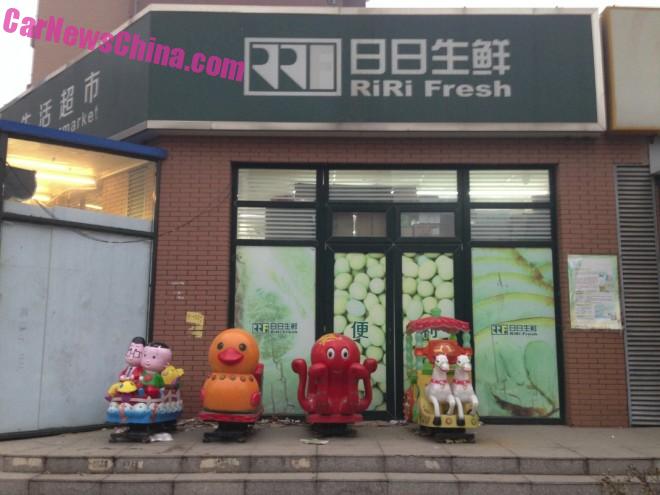 The RiRi Fresh supermarket. Normally a hustling and bustling center of commerce. But not today. Tomorrow is another Red Alert day. If the skies are dirty enough I might go for a walk again.