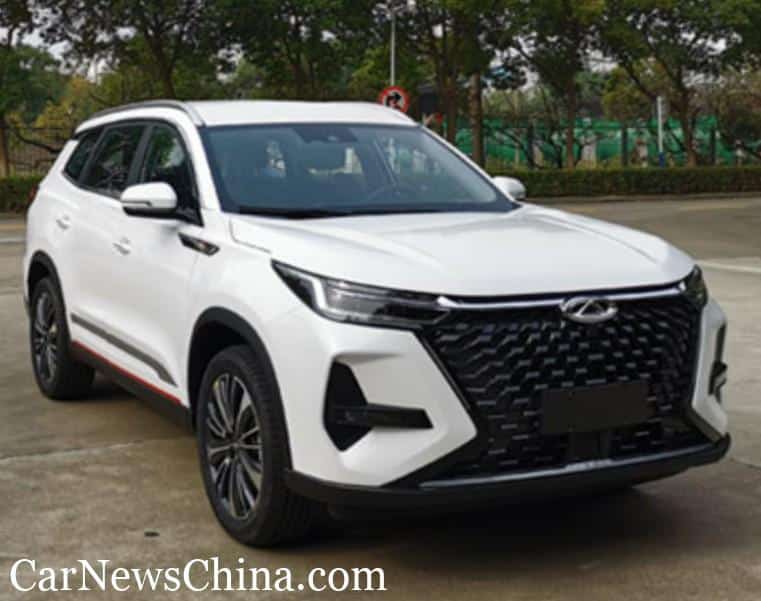 This is the upcoming Chery Tiggo 8, a new Chinese 3-row SUV. Design is interesting, with a huge black grille, LED headlights, black window frames, and red trim detailing. ‘Tiggo’ is nowadays the name of Chery’s SUV series. The Chery Tiggo 8 Pro is the third Tiggo 8 and the 12th Tiggo currently on the market. Yes, Chinese car buyers can choose between 12 different Tiggo SUVs, special editions excluded, which all overlap in size, power and price.

The new Chery Tiggo 8 Pro will be positioned as a sporty variant of the Tiggo 8, with a sportier design and aimed at a younger audience. Otherwise, it is largely the same car as the others. Size: 4745/1860/1745, 2710. Other than the others, it will come in 5-seat and 7-seat versions. Engines are again the same as in the Tiggo 8 Plus.

The rear looks sporty enough with a large roof spoiler with an integrated brake light, a car wide light unit, and four fat exhaust pipes. The Chery Tiggo 8 Pro will officially debut early next year and launch on the Chinese car market in April.

Update! Spy shot showing the interior, which looks quite different from the interior of the Tiggo 8 Plus, more modern, with classy speakers in the door, two separated screens, and a steering wheel loaded with buttons.

And finally, a photo of a blue Tiggo 8 Pro on the (pre-) production line.