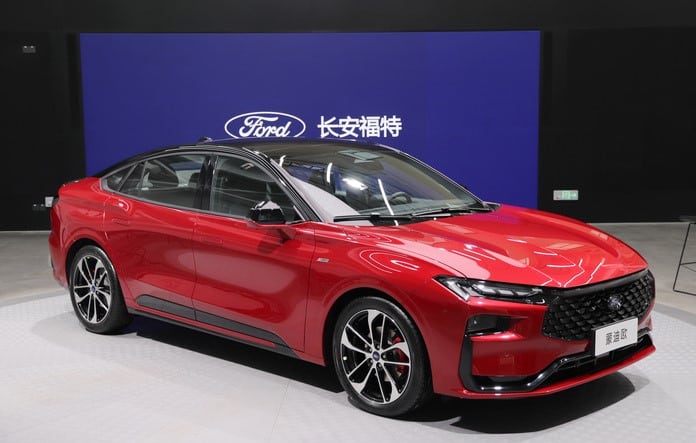 The Ford Mondeo is a China-only sedan manufactured locally at the Changan-Ford joint venture. The Mondeo is based on the Ford C2 platform, which also underpins the Ford Evos and the Lincoln Zephyr in China.

There are three trim levels: Fashion, Sport, and ST-Line. This photo is a very red top-spec Ford Mondeo ST-Line version.

The front face features split headlights with daytime running lights across the front, ending with sharp corners on either side. Officials said the design comes from traditional Chinese calligraphy, which further enhances the sense of power.

Besides, the new center grille features a “breathing grille,” which can open and close automatically several times when the car is unlocked or when you approach with the key, a useless but attractive design.

The black roof, slip-back design, the segmented waistline, various bits of black trim such as the black decorations in the rear surround area, and a large diffuser at the bottom.
And the short tail, black rear wing, cool Mustang-style rear lights also enhance the sporty of the whole car.

The interior features a 1.1-meter wide screen is consisting of a 12,3-inch digital instrument panel and a 27-inch central screen for the infotainment. In addition, it has a sporty three-spoke flat-bottom multi-function steering wheel and leather-alcantara seats, and a knob-type electronic gearshift mechanism.

The new Mondeo is a sizable car with lots of space in the back. Size: 4935/1875/1500mm, with a 2945mm wheelbase. The size surpasses all the popular B-segment competitors, and it is even more significant than the Buick Lacrosse. The Chinese are more concerned about rear space and tailgate space; this car meets that need perfectly.

The new Mondeo will be powered with a 2.0 turbo with 238 hp and 376 Nm, mated to an 8-speed automatic. So the new car has a sporty look and a sporty heart.

The new Mondeo: can it reinvent the Ford brand?

The mid-segment market is currently performing steadily, with the SAIC-Volkswagen Passat, FAW-Volkswagen Magotan, GAC-Honda Accord, GM Buick Regal, and Buick Lacrosse, GAC Toyota Camry, and FAW Toyota Avalon still active in the front row. This price cut for the Ford Mondeo seems a little reluctant. But the new Mondeo does show us that Ford is paying attention to the Chinese customer market. The new Mondeo was designed by Ford’s China Design Center, specifically for the Chinese market.

So it is a very pleasing and exciting thing for consumers, especially the pretty price. Compared to the 2020 Mondeo price, the new Mondeo’s price has been reduced by about 30 000 to 40 000yuan(about $4700-6280). Does this mean that the Mondeo will reshape Ford’s brand values in China?