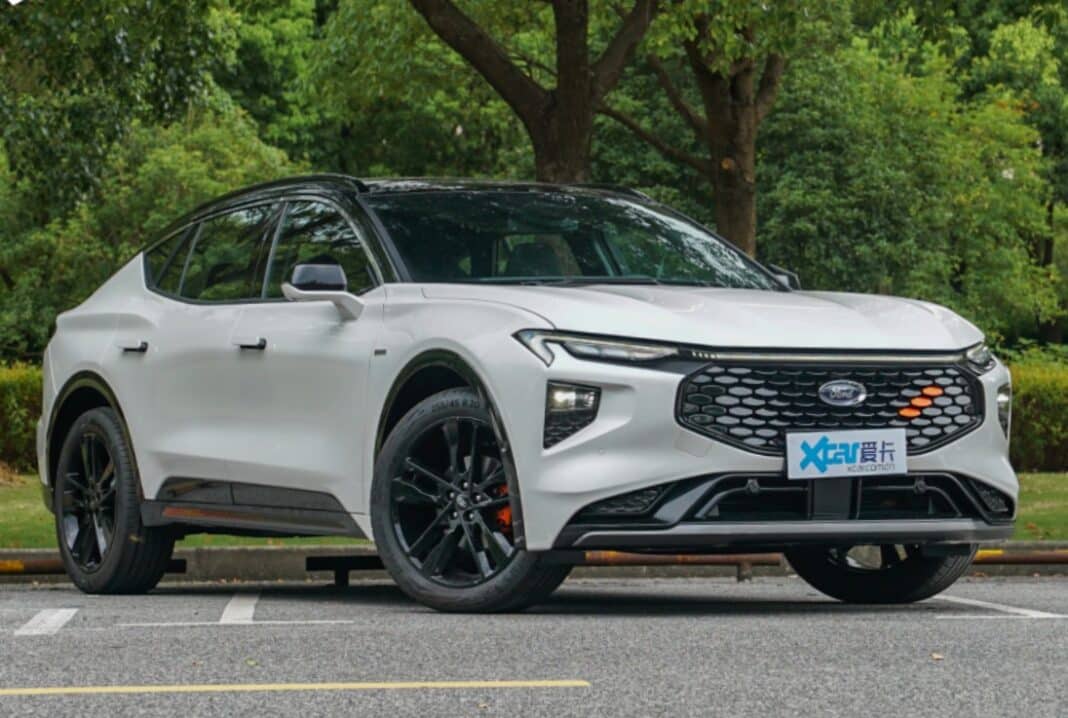 The new Ford Evos is probably one of the most interesting cars to come out of China in 2021. It has a unique design, mixing elements of a fastback, an SUV, a crossover, and even a bit of wagon for the heck of it. The Ford Evos was designed and developed in China and will only be sold on the Chinese car market. The white car on the photos is the range-topping Evos EcoBoost 245 First Limited Edition.

The Ford Evos is made in China by the long-running Changan-Ford joint venture. The JV hasn’t been able to catch up with the broader market for years, mostly due to outdated design and technology. The Evos is one of the vehicles that got to turn the tide. But there is a small problem immediately: the Evos is petrol only. There is no PHEV or EV available or even under development at this stage. The Chinese auto market is now surely and seemingly irreversible moving to new-energy vehicles, and launching a new car in China in 2021, especially in this segment, without any new-energy option is just very odd.

Perhaps the Evos’ design can woo some buyers. It is a pretty and daring car. It could be, in a way, a four-door Mustang. It looks better than the Mustang Mach E. Only thing ugly is the very visible exhaust muffler under the rear bumper. We haven’t seen that for a while! Mostly the mufflers are neatly hidden of of sight nowadays, but apparently not at Changan-Ford.

The interior is totally with time, and it probably is the most modern interior of any new Ford in the world. The screens are 1.1 meter wide and divided into two parts: a 12.3 inch instrument panel and a 27 inch infotainment screen. Yes, the middle and right part are really one screen. Very impressive. As this is the range-topping car the interior is dressed up with orange detailing on the steering wheel and center tunnel. The seats are part leather part alcantara.

The instrument panel with a very cool graphic of the car driving towards a big city. The Evos is the first China-made Ford equipped with Ford’s BlueCruise active driving assistance system. Ford China claims the system can achieve “L2+ level automatic assisted driving”. The infotainment system runs on Ford’s SYNC 2.0.

The middle/right side of the screen with vehicle info in the middle and infotainment for the passenger on the left. The sound system comes from B&O and features 16 speakers.

This is so great about modern cars. With the passengers all entertained and glued to their little screens, the driver can drive and be alone with his thoughts.

If the passenger is bored with television she can change the screen into a relaxing animation of grass, or a mountainous landscape, or other such imagery.

There is only one engine for the whole lineup: a 2.0 turbocharged four-cylinder petrol engine with an output of 238 hp and 376 Nm. That’s pretty good for a 2.0 turbo. The engine is mated to an 8-speed automatic, sending horses to the front wheels. And, as the photo shows, Ford isn’t into engine covers at all. Most Chinese car makers completely cover their engines nowadays, making for a very clean engine bay. Ford is old-school, or old fashioned, showing every pipe, tank and wire.

So the Ford Evos is a bit of a mixed bag. Great looks, great screen, but petrol only and expensive. And then there is that muffler! With those tiny exhaust pipes on the sides! Come of Ford, you can do better than this.