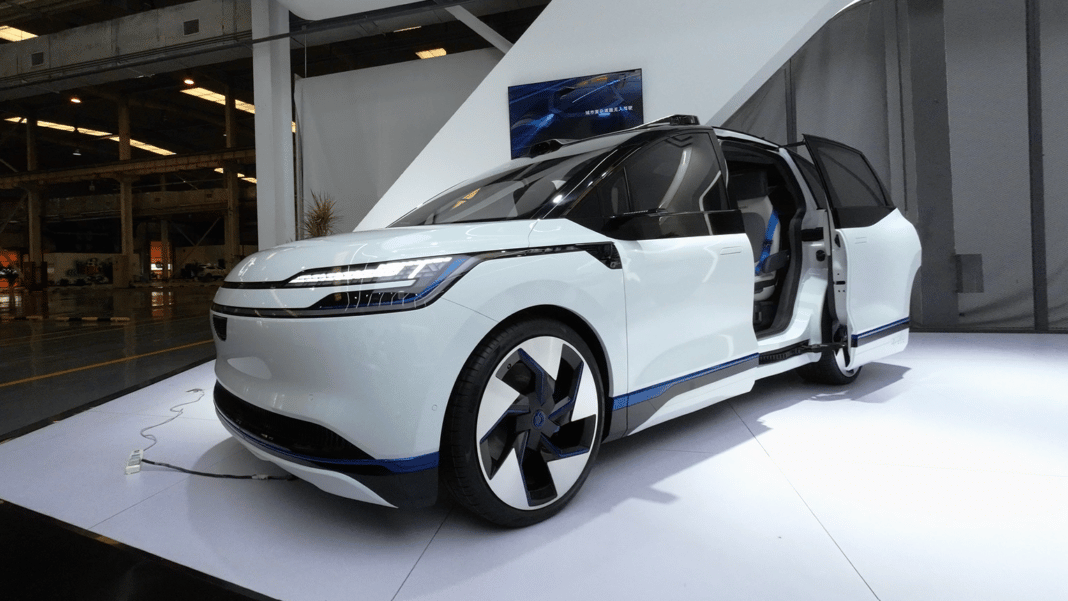 But what does the Baidu RT6 mean for driverless taxis? Well as it turns out, quite a lot.

While Elon Musk has been promising a fleet of fully autonomous robotaxis for years, Baidu, the Google of China, has been busy racking up driverless miles of its own. Over 20 million of them in fact.

The RT6 is the sixth-generation of this technology, and so Baidu invited us to be the first English-speaking media to get up close with it. Read on to learn more and check out the video below.

Baidu might be more famous for the search engine dominance in China but they also have a long history with autonomous vehicles, around a decade in fact.

In reality, it’s a natural progression for them, because much like Google Maps in other countries, Baidu is the the company that maps all of China’s roads too and provides this data to many of China’s EV start-ups today.

On the back of that knowledge, Baidu started to invest in autonomous cars, beginning with a simple ATV fitted with a few sensors. Over the years this ability grew atop the roofs of existing Chinese cars fitted with an often comical array of technology and sensors.

In the latter years of that research, Baidu gradually developed far enough to earn the right to operate driverless taxis in special zones in ten cities across China as part of their Apollo Go program.

The caveat of those cars was twofold. Firstly, Baidu had to retrofit existing cars such as Lincoln Continentals and more recently the Arcfox Alpha T.

Secondly, while the cars operated free of a driver, a safety driver was present in the passenger seat at all times.

But this month that all changed as Baidu became the only operator in China licenced to offer 100% driverless taxis in China. That means no drivers, and no safety monitors. The first phase of this licence is limited to the cities of Wuhan and Chongqing.

So what about the RT6?

The Baidu RT6 is the latest product of all of that knowledge and is the first robotaxi from the company to be made by Baidu themselves.

Built on their new Xinghe platform, designed specifically for fully autonomous cars, the RT6 differs from previous iterations by integrating the technology into the car itself.

A complete suite of 38 sensors and cameras, including 8 LiDar units and 12 high definition cameras, help to navigate the car safely in some of the most challenging driving conditions you can imagine.

What does it take to handle all that information? Nothing short of 1200 TOPS (Tera Operations Per Second), the common metric for measuring the processing power of autonomous services.

All that knowledge and processing power are said to give the RT6 the driving ability of a skilled driver with 20 years of experience.

More significant than all that, however, is the price. With the Baidu RT6 coming in at just 250,000 RMB (Around $36,000), the technology is more affordable than ever and almost half the price of the fifth-generation.

As an early prototype, the RT6 in our exclusive viewing wasn’t yet ready for driving of any kind, autonomous or otherwise, but we were able to get a look at how it might be specified in future.

The launch model comes with just three seats and no steering wheel, which is a curious thing to behold – a glimpse into a not-too-distant future.

In place of the driver’s seat was a drinks cooler and table, a representation of the flexibility this new platform offers.

Baidu says that the interior can be set up in many ways, including with more seats, with desktops for work, with vending machines, or even with gaming consoles. Imagine checking out Gran Turismo while your steering wheel-free car takes you to the airport!

The interior itself is cavernous and sliding rear doors help aid to the cabin. In this set-up, passengers get over a metre of legroom with enough space to recline every seat.

Between the two rear seats sits a console with a tablet-style screen in the middle for demonstration purposes.

The seats, lacking somewhat in any kind of bolstering, feature white and grey leather with grey fabric, while Baidu opted for pretty cool blue seatbelts as a contrast.

Alcantara lines the roof of the RT6 and several triangular glass segments make up a stylish panoramic roof which, together with a large glasshouse, will give the cabin an airy feel on a sunny day.

You’ll also find built-in cameras for occupant safety. Oh and that missing steering wheel? It’s detachable, so you can take it or leave it.

Outside, the RT6 adopts an MPV-style body with rounded styling front and rear and matrix-style lights.

Black paint below the glasshouse gives the impression of larger windows, and blue accents are add some highlights to the predominantly white body. The rear is also painted black.

Door handles are flush to the body and conventional mirrors make way for blade-like camera units, both of which help the RT6 to slip through the air as efficiently as possible.

That job is made easier by the integration of that comprehensive sensor list, with three LiDAR units mounted above the windscreen, two in the wings ahead of the front doors, one each in the centre of the front and rear bumpers, and one above the rear window.

The five-spoke alloys, with a large brushed metal triangular segments and black and blue contrast segments, make quite an impression. They look really sharp and give the RT6 a big-wheel vibe.

It’s not small either, clocking in at 4.76-metres long with a 2.83-metre wheelbase. There are no measurements on height or width but it’s at least 1.8-metres tall.

What Does RT6 Mean for Driverless Taxis?

Baidu think quite a lot, with the key point being the accessible price point. With the technology now so affordable, Baidu predict that robotaxis like this one might halve the cost of taking a taxi in future.

That will likely come at a cost to the roles of taxi drivers of course, but if you’ve ever experienced the occasional thrill of a Chinese taxi driver on a mission you might think that’s no bad thing!

Undoubtedly the first use of fully driverless taxis in Wuhan and Chongqing, currently using the Arcfox platform and fifth-gen technology, will play an important part in developing the trust necessary for driverless taxis to really take off, but the RT6 is ready to take that experience up a notch in 2023.

Could it finally be the car to bring that image of spacious, flexible, and affordable driverless taxis to reality? We’ll let you know in 2023 when we get a chance to ride one.