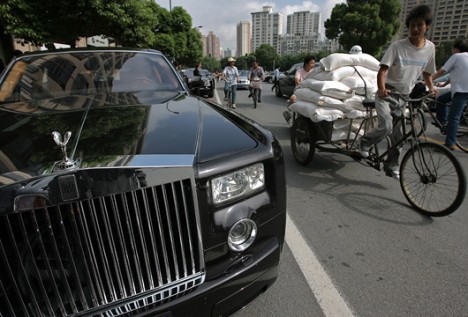 The automaker delivered almost 500 cars in China in the first 10 months of 2010, compared with about 100 for the whole of last year, Paul Harris, the company’s Asia-Pacific regional director, said in an interview.
The exclusive brand, which competes with Volkswagen AG’s Bentley and Daimler AG’s Maybach brands, is selling more of its Phantom and Ghost sedans in China as rising incomes in the world’s fastest-growing major economy boost sales of luxury cars.

China has 875,000 millionaires, 6.1 percent more than last year, according to a report by the Shanghai-based Hurun Research Institute.

“The Chinese market in general is showing only one direction,” Harris said. “That’s exceptional growth, and it’s going to be ongoing for quite a while.”

Munich-based BMW bought the rights to Rolls-Royce cars for 45 million pounds ($70 million) in 1998, and began building them at a new factory in 2003.

China will become Rolls-Royce’s biggest market, surpassing the United States, as early as next year as the Ghost spurs demand for its cars, Singapore-based Harris said. The company sold about a third of its cars in the US in 2009.

Rolls-Royce may add as many as four more dealers in China by the middle of next year, in second-tier cities such as Tianjin and Wuhan, he said. The England-based carmaker currently has eight dealerships in the nation.

The latest Ghost model, introduced last December, has boosted growth for the exclusive brand after the financial crisis depressed sales 17 percent in 2009. Rolls-Royce delivered 2,007 cars worldwide through October, already surpassing the record since BMW took over of 1,212 in 2008, and 1,002 deliveries last year.

The Phantom comes with a 6.75 liter engine and soft leather upholstery as standard, and an extended-wheelbase version costs 8.2 million yuan, the company said.

Imported luxury cars cost more in China than in countries such as the US because the vehicles are subject to import duties and consumption taxes.

An imported car with an engine bigger than 4.0 liters will face an import duty of 25 percent, value-added taxes of 17 percent, and a consumption tax of 40 percent, according to researcher J.D. Power & Associates.