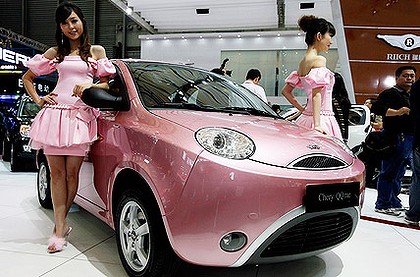 China’s auto sales are expected to reach 18 million units this year as sales in the first 11 months hit 16.4 million, figures released Thursday by the China Association of Automobile Manufacturers (CAAM) showed. The full-year sales projection by the CAAM Thursday has exceeded its previous forecast of 17 million units made in November.

China overtook the United States last year to become the world’s largest auto market by selling 13.65 million vehicles, up 46 percent year on year, while production that year jumped 48 percent to reach 13.79 million units.
The 18-million-units total, if achieved, would mean an increase in both vehicle sales and production this year more than 30 percent from last year.

Almost 1.7 million vehicles were sold in November alone, a year-on-year increase of 26.9 percent. Vehicles produced in the month exceeded 1.75 million units, up 26.1 percent, the figures showed.

“The end of each year is usually the peak time for car sales and production in China,” said Zhu Yiping, associate secretary-general of CAAM.

“We are expecting another surge in sales in December because people worry that the government might phase out tax reductions and subsidies for car purchases starting next year,” Zhu Yiping said.

To boost the economy amid the economic downturn and spur the use of clean and fuel-efficient cars, the government slashed the car purchase tax from 10 percent to 5 percent in 2009 on vehicles with a displacement of less than 1.6 liters. From Jan. 1 this year, the tax for smaller-engine vehicles was set at 7.5 percent.

But the 10-percent tax for vehicles with bigger engines is still in place.

Buyers of vehicles with engines smaller than 1.6 liters also receive a 3,000-yuan subsidy.

People are also worried that the threshold of car purchases could be set higher next year in the county’s major cities like Beijing, where almost 2,000 new cars hit the road every day.

These factors could be harbingers of another potential sales jump in the last month of 2010, securing China’s hold on the world’s largest auto market title, Zhu said.