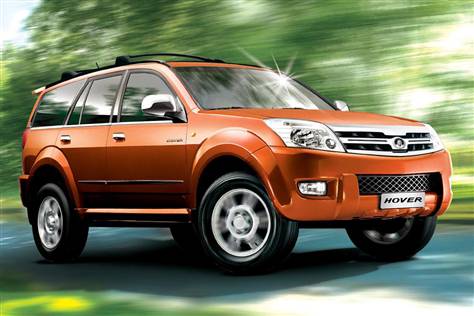 Its growth pace far exceeded that of the entire industry, it said in a statement. Vehicle sales in the world’s largest auto market climbed 34 percent year to year in the first 11 months of 2010, according to the China Association of Automobile Manufacturers. The whole-year rate is not yet available.

The Hong Kong-listed carmaker exported 55,000 vehicles in 2010, with an export value of more than 3 billion yuan ($453 million). Both numbers surged more than 60 percent annually.

The company said it aimed to double sales this year with the unveiling of more than 10 new models.

It also has set a sales target of 1.8 million vehicles in 2015 when it will have 24 assembly plants operating overseas with a combined annual capacity of 500,000 units.

Shang Yugui, a deputy sales manager of Great Wall Motor, said domestic brands will have a tough time in Beijing after the city limited the issuance of vehicle plates to 240,000 this year to tackle traffic problems. The number is roughly one-third of the normal demand.

Other first- and second-tier cities, such as Guangzhou and Chongqing, might also follow Beijing’s example, said Shang.

The company will move to focus more on second- and third-tier cities and the vast county seats and countryside by adding 100 dealers within one to two years, Shang added.