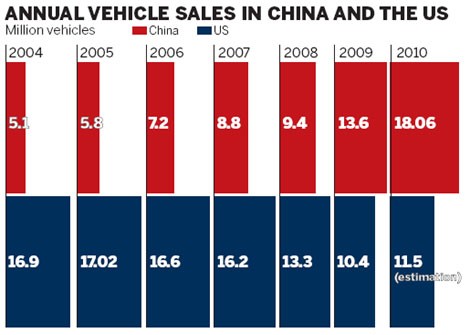 China’s automobile market registered the highest annual sales in the history of the global automobile industry in 2010, far surpassing those of the United States for a second consecutive year. That came as successful stimulus measures from local governments, and a strong economy, boosted the nation’s vehicle sales by more than 30 percent.

China’s December auto sales hit a monthly record high of 1.3 million units in 2010, as buyers flocked to catch the last opportunity for tax incentives for small cars and subsidies for trade-ins, as well to take advantage of Beijing’s quota policy on car purchases.

“The change in policies makes us lower our anticipation for this year’s automobile market from the previous 10 to 15 percent year-on-year growth to no more than 8 percent,” said Cui Dongshu, vice-secretary-general of the National Passenger Car Information Exchange Association. “And the serious excessive consumption in 2010 even may lead to zero or negative growth this year.”

The association’s Secretary-General Rao Da said he believes that in 2011 China will probably record the first negative year-on-year auto sales growth for 20 years.

“However, short-term negative growth is good for the industry restructuring and mergers which the government is calling for. Meanwhile, the fierce competition will help improve the quality and technology of the vehicles, as well as the management and operation of the automakers,” said Rao. “It should be a good opportunity for China to strengthen the automobile industry.”

According to Rao, the withdrawal of the tax and subsidy policies will have a heavy impact on the sales of small cars, with an engine capacity of 1.6 liters or lower. That category accounted for 60 percent of last year’s passenger car market.

“The luxury car, SUV and MPV segments will grow faster than the total industry as people’s requirements for cars change, and they look for more functional transportation tools,” said Rao.

Analysts expect that the domestic automobile market will grow at 10 to 15 percent annually on average during the next five to 10 years, saying that’s a reasonable rate for healthy development.