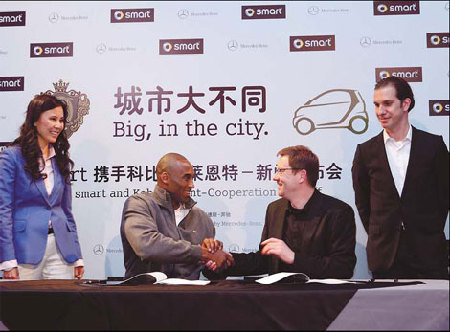 This is a part of the German automaker’s new brand campaign “Big, in the city” for smart, its urban-friendly car launched in China in 2009. As part of this new partnership, Bryant will be featured in a smart TV commercial and is expected to visit China in 2011 for a series of exciting events. This is also the first time that Bryant is appearing for a market-specific campaign.
At the signing ceremony held in Los Angeles last week, Klaus Maier, president and CEO of Mercedes-Benz (China) Ltd, said that both Kobe and smart are legendary in modern urban life. The partnership with Bryant will strengthen the position of the smart car as the most popular lifestyle and city car in China, and Kobe’s passion, agility, intelligence and creativity will blend beautifully with smart’s core values.

As the urban lifestyle trendsetter, smart was designed with Mercedes-Benz’s spirit and innovation in mind, abiding by its brand mantra – “The best or nothing”, said Maier.

This pursuit for excellence is reflected in Bryant’s sportsmanship on the basketball court. A five-time NBA finals champion, Bryant is one of the most valuable players who has been selected into the NBA All-Star Games for 11 consecutive years since 2000 and is also the most named NBA Most Valuable Player to date.

Mao Jingbo, vice-president of marketing at Mercedes-Benz (China) Ltd, expressed her confidence and excitement about the new brand campaign and partnership with Bryant.

She said that this collaboration is a breakthrough in smart’s brand positioning – “the art of being smart”. “We would like to emphasize on the concept of thinking big and bringing a smart urban mobility option to the city. Hence, in our new brand campaign for 2011 – ‘Big, in the city’ – Kobe and smart together will make big impact to our urban life.”

“An all-new smart TV commercial is only the beginning of our new partnership with Kobe. In next three years, we will also launch a series of big activities and test drives to bring to smart fans in China an entirely new experience that characterizes the brand’s artistry and unique personality,” said Mao.

A Hollywood team will shoot the commercial designed especially for the China market, with renowned director Dave Meyers at the helm.

Scheduled for release in April, its storyline will involve Bryant and smart together accomplishing an exciting mission in China.

The fascinating story will reflect the soul of the “Big, in the city” brand campaign – the excitement in driving freely, the wisdom of transforming convolution to simplicity, the joy in safe driving and the big environmental benefits in a small car.

The commercial will also feature many Chinese elements, such as the works of the famed artist Fang Lijun and many familiar Chinese faces.

Speaking about his involvement with the smart brand campaign, the NBA star said, “I am sincerely looking forward to this collaboration with Mercedes-Benz and smart. China is like a home away from home for me, and all of the cities I have visited so far have fascinated me. I hope the 2011 China visit will take place very soon, and I can’t wait to drive my smart on Chinese streets to understand and experience the local culture and customs.”

The smart engineered by Mercedes-Benz has enjoyed strong popularity among auto fans around the world since its launch in 1998 and has grown into a true lifestyle icon, delivering more than 1.2 million units worldwide.

Since entering the China market only in April 2009, its sales have surpassed 4,000 units in 2010, representing a year-on-year increase of over 119 percent.

Maier also reflected upon his optimism for smart and the China market by sharing that the fast increasing sales of smart in China clearly shows the great potential of the China market, and said that he is confident the new 2011 edition will become a favorite for smart’s customers.

At Auto Guangzhou last December, smart introduced six new 2011 models to the Chinese market with three power options, giving customers even more options to customize their smart to fit their own unique lifestyle.

The smart Brabus xClusive Coupe, which made its worldwide debut in the Chinese market, offers an impressive power of 75kW and maximum torque of 147 Nm, giving the model lightening speed and power.

The vehicle accelerates from standstill to 100 kilometer/hour in only 8.9 seconds, delivering extraordinary thrill to driving.

The 2011 edition also offers two additional color options, matt green and light blue, while improvements in the exterior and upholstery detailing also give the vehicle a more dynamic look and feel.

“The smart’s agile mobility and unique, trend-setting design, combined with its latest brand campaign of “Big, in the city” coincide with the demands of an ever expanding urban lifestyle,” said Stefan Herbert, head of smart operations at Mercedes-Benz China Ltd.

He added that smart will also introduce specialized models to their already impressive line-up this year, to include the Year of the Rabbit Limited Edition, following the success of the Tiger and Greystyle Edition models. The smart Year of the Rabbit Edition will arrive later this year, further fulfilling customer demands for individualized models.