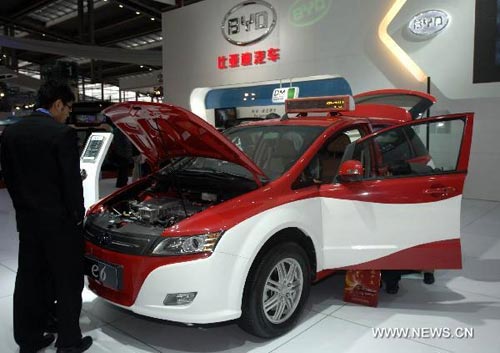 Shares of BYD Co. Ltd., the Chinese automaker backed by U.S. billionaire investor Warren Buffett, which will begin taking subscriptions for its initial public offering Tuesday, are likely to fall below their IPO price in Shenzhen like many other recently listed companies.

BYD said it will raise 1.42 billion yuan ($219 million) in its Shenzhen, China share sale, less than the company originally sought. BYD will sell 79 million shares at 18 yuan apiece, the company said in a statement to the Shenzhen exchange. The carmaker had planned to raise as much as 2.19 billion yuan, according to the statement.

Shenzhen-based BYD is tapping the mainland stock market to raise funds for expansion even as the CSI 300 Index, tracking stocks on the Shanghai and Shenzhen exchanges, tumbled about 15 percent from its April high on concern economic growth is slowing. The timing of the share sale wasn’t “good”, Stella Li, senior vice-president of BYD, said before the announcement.

“After the authorities approved our share sale, we had to go public within two months,” Li said in an interview on June 17. “We’d rather list our shares next year, but it’s out of our control.”

The Hong Kong shares of the company have slumped 47 percent this year, compared with a 5.4 percent decline in the benchmark Hang Seng Index.

BYD’s share-sale experience isn’t unique. Prada SpA, the Milan-based luxury company, raised $2.14 billion by selling shares near the low end of its target in this year’s biggest Hong Kong initial public offering, according to people familiar with the matter on June 17. Samsonite International SA, the luggage maker, fell 7.7 percent on June 16 in its Hong Kong debut amid a global stock market slump and concern China’s economy may cool.

China’s passenger-car sales fell for the first time in more than two years in May after the government ended tax incentives and subsidies.

“They need to increase their quality. That’s pretty important,” said Jack Yeung, an analyst at BNP Paribas Securities Asia Ltd in Hong Kong. “Instead of investing in new models or new products, they should also invest in the technology.”

BYD is seeking to reverse falling sales by introducing a luxury sedan and more electric vehicles over the next two years, said Li at the company’s Pingshan headquarters in southern China.

The E6 electric car will be sold to individual consumers in selected Chinese cities from July, and the company will roll out the luxury G6 sedan at the end of the year, she said. The automaker is also planning to introduce a small electric vehicle in China next year, Li said.

Vehicle sales at BYD, whose F3 sedan was China’s most popular passenger car in 2009 and 2010, may be unchanged from last year as the overall industry slows and the company misread market trends, she said. The automaker missed its 2010 target by 13 percent, selling 519,806 cars.