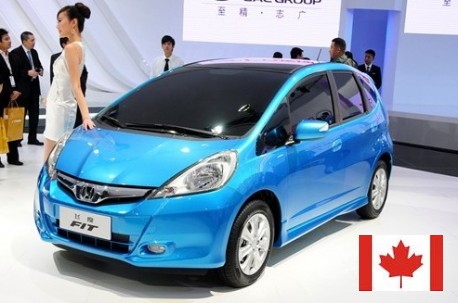 Chinese-made cars have quietly arrived in North America for the first time, but without the bamboo dashboards and quirky names that have adorned them at recent auto shows.

Japanese automaker Honda is crossing the threshold by importing subcompact cars into Canada from one of its plants in China. This month, Honda Canada began receiving its smallest model, the Fit, from China instead of Japan, as part of a strategy to produce more vehicles outside its home country.

The decision allows Honda to eke out higher profit in a segment of the auto market where margins are extremely thin, especially since the high value of the yen cuts into all Japanese automakers’ overseas operations.

“The yen has been getting stronger and stronger,” Jerry Chenkin, executive vice president of Honda Canada, said on Tuesday.

Few car shoppers are likely to notice the change, and there is no expectation that Chinese-made cars are destined for the United States anytime soon. But the Honda imports are significant because vehicles are among the few categories of consumer products in North America for which manufacturers had not turned to China to try to cut costs.

“There’s been much talk about Chinese cars being sold in North America, but we hadn’t seen that yet,” said Michelle Krebs, a senior analyst with Edmunds.com, an automotive research Web site. “These are from a well-known, major global automaker, so that eliminates some of the challenges that face Chinese automakers.”

All the major automakers have plants in China, which they generally use to make vehicles to sell there. Only 3 percent, or 580,000, of the vehicles built in China last year were exported. Many automakers are reluctant to use that capacity to supply other countries because they want to maximize sales in China, now the world’s largest car market.

Mr. Chenkin said that the move had relatively little to do with direct costs. He declined to comment about wage differences between Japan and China.

“From what I understand, in terms of the cost of production for the Fit, the difference between China and Japan is not significant,” he said. “But the exposure of the yen exchange rate is of concern to Honda and other manufacturers.”

Lower disposable incomes and higher gasoline prices in Canada mean that small cars like the Fit are more popular there than in the United States. Honda’s profit on the Fit is further squeezed by a 6.1 percent import duty, while many competing models enter Canada duty-free because they are made in Mexico or the United States.

Honda is building a plant in Mexico that is scheduled to start assembling the Fit for the United States and other countries in early 2014. Honda is likely to use that plant to supply Canada as well, most likely making the importing from China a temporary measure.

Honda has been exporting the Fit from China to 27 countries, mainly in Europe where it is sold as the Jazz, for about five years, so there is no concern in Canada about the quality of its production, Mr. Chenkin said.

“We are fully confident that these vehicles meet all Honda standards,” he said. The company has imported electrical power generators to Canada from Honda plants in China for some time without encountering quality issues or customer resistance, he said.

John Mendel, executive vice president of American Honda, said that there were no plans to supply dealers in the United States with Chinese-made Fits.

Ms. Krebs said Honda and other automakers would have a more difficult time selling cars assembled in China to Americans than to Canadians and Europeans. Although made-in-China products are common in the United States, most cost a small fraction of the price of a car. Even established automakers like Honda are hesitant to risk turning off buyers with Chinese imports, particularly because the United States is an important source of profit and prestige.

“Canada’s always been much more open to cars from places that it was not acceptable for the U.S.,” Ms. Krebs said. “Honda has a production system that it uses every place in the world. Consumers can be pretty confident that the same standards apply.”

Analysts note that American car shoppers were largely skeptical of Japanese and Korean vehicles in their early days here and would tend to react similarly to models made in China, at least initially. A study earlier this year by the consulting firm GfK Automotive found that about one-third of Americans were open to buying a car from China. Younger respondents were more amenable.

The Fit is a relatively small-volume car in Canada, with sales of 2,802 through November. That is down 55 percent from the same period in 2010, largely because of supply shortages in the wake of the earthquake and tsunami in Japan in March.

Honda has a large manufacturing presence in Canada, where it builds the Civic, several Acura models and engines. It is hiring an additional 400 workers in Alliston, Ontario, where production of CR-V sport utility vehicles will begin next month.