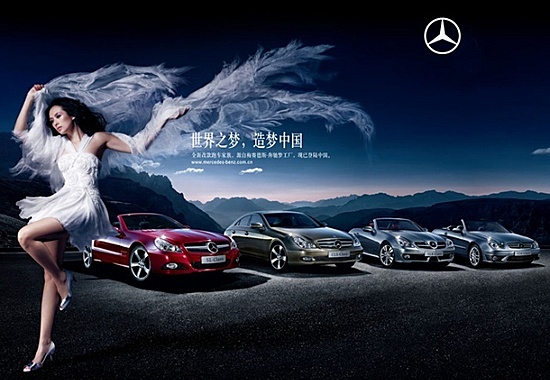 There has never been a better time to buy a Mercedes-Benz in China. The problem for luxury carmakers such as Daimler AG is that the incentives are likely to get even bigger.

Mercedes dealers are offering record markdowns of 25 percent on high-end models such as the S300 sedan, according to data stretching back to 2009 at cheshi.com, which tracks prices at more than 3,000 Chinese dealerships. BMW 7-series and Audi A8Ls sell for 20 percent below sticker prices, waiting lists have vanished and salesmen are dangling perks ranging from free iPhones to Hermes-bag coupons.

The escalating price competition shows that the case is weakening for luxury cars to fetch higher prices and profit margins in Beijing than in New York and Berlin as supply catches up to demand. The discounts, which began late last year with entry-level models, are spreading to the priciest high-end sedans as the world’s second-largest economy slows and China’s rich find an increasing abundance of vehicles to choose from.

“This year’s luxury-car discounting is the most I’ve ever seen,” said Scott Laprise, automotive analyst at CLSA Asia Pacific, who has been based in Beijing for more than five years. “China’s luxury car price premium is eroding.”

China’s 2012 vehicle sales will probably miss an 8 percent growth forecast as the slowing economy and rising fuel costs curb buying, an official at the state-backed auto association said. Deliveries may fail to increase by even 5 percent because of the “difficult” economic backdrop, Gu Xianghua, deputy secretary general of the China Association of Automobile Manufacturers, said today, citing his personal opinion.

Growth in premium-light vehicle sales in the country, the world’s second-largest luxury-auto market, will slow to 24 percent this year after jumping 34 percent in 2011, according to Christoph Stuermer, a Frankfurt-based analyst at IHS Automotive.

Profitability — in terms of earnings before interest, taxes, depreciation and amortization as a proportion of sales — will shrink at BMW, Daimler and Audi this year, based on analyst estimates compiled by Bloomberg.

The trend may continue. Credit Suisse Group AG projects average profit margins in China at the three high-end German carmakers will fall 4 percentage points by 2014 from the current 16 percent to 18 percent, closing in on global standards of about 10 percent to 12 percent.

“The margins they currently achieve in China are not sustainable,” Arndt Ellinghorst, London-based analyst at Credit Suisse, said in a telephone interview. “Price competition will intensify.”

For luxury carmakers, the rising competition from a slowing China adds to intensifying pressure from Europe, where carmakers are forecasting a contraction in the market this year. Europe’s luxury demand is set to dip 2 percent to 3.07 million units, IHS predicts. In the U.S., market leaders BMW, Mercedes-Benz and Toyota Motor Corp.’s Lexus all forecast higher sales this year, as unemployment falls and consumer confidence rises.

For Mercedes-Benz salesman Jack Ren, the days when customers paid extra to cut in front of the line are over. His dealership in Shanghai introduced unprecedented discounts for S- Class models in February to clear inventory.

At Renfu Teli Motor Co., a Mercedes distributor in the southern Chinese city of Shenzhen, female customers can get as much as 20 percent off on Chanel, Louis Vuitton and Hermes bags if they buy a car in March. BMW dealers offered iPhones, free car insurance and maintenance in January and February, while Volvo gave C30 buyers a free trip to Hong Kong, according to Kate Zhu, an analyst with Morgan Stanley.

Audi doesn’t dole out “substantial” incentives in China, where distributors are free to offer discounts, Martin Kuehl, Beijing-based spokesman for the automaker, said in an e-mail. BMW China Automotive Trading Ltd. President Ivan Koh said his company has a “stable price” strategy for the long term. Mercedes-Benz didn’t respond to requests for comment.

Audi, BMW and Mercedes accounted for more than 70 percent of luxury-car sales in China, with Audi having the largest share at more than 30 percent, according to Morgan Stanley. Sanford C. Bernstein estimates China generated about 30 percent of Audi’s earnings in 2010, and accounted for almost half of Munich-based BMW’s last year.

The German carmakers aren’t the only ones battling for China’s rich. General Motors Co., the biggest foreign automaker in China, plans to increase deliveries of its Cadillac and sport-utility vehicle lineup in the country as part of plans to double sales to 5 million by 2015. Tata Motors Ltd.’s Jaguar Land Rover, Toyota Motor Corp.’s Lexus and Nissan Motor Co.’s Infiniti are also expanding in China to loosen the German trio’s grip.

While China may be slowing, luxury car deliveries, which more than doubled last decade, have further room to grow. Premium automobiles accounted for about 6 percent of total passenger-vehicle deliveries in 2010, versus 13 percent in the U.S., 18 percent in western Europe and 7.6 percent worldwide, according to estimates this month at JPMorgan Chase & Co.

“High-end cars won’t grow at the same explosive pace, but they will still grow,” said Xiong Chuanlin, vice secretary- general of China Association of Automobile Manufacturers. “Chinese consumers have a fondness for luxury.”

Luxury automakers should be careful that discounts don’t dull the luster of their brand even as they chase gains in market share, said Credit Suisse’s Ellinghorst.

“You’d rather lose a customer because of pricing because that is part of your premium heritage: people can’t afford it,” he said. “Protecting your brand should be the most important thing.”