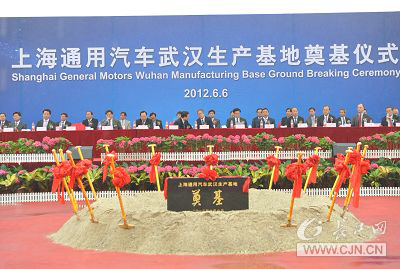 Shanghai-GM, the joint venture of China’s SAIC Motor and General Motors (GM), expects its new factory in the central Chinese metropolis of Wuhan to add an annual production capacity of 300,000 units by 2014, as the project broke ground Wednesday. With a projected investment of 7 billion yuan ($1.1 billion), the new plant will cover an area of 2.32 square km in the city’s Jingang New District.

Ye Yongming, general manager of Shanghai GM, said that by setting foot in Wuhan, the company is expanding its vehicle production activities from China’s coastal cities to the country’s interior, which is conducive to tapping markets in the country’s vast central and western regions.

He said the Wuhan facility will be the company’s fourth production base after those in the eastern cities of Shanghai and Yantai and the northeast city of Shenyang.

Shanghai GM has projected an annual output of 2 million units by 2015. In order to realize this goal, its Shanghai plant recently added 240,000 units of production capacity on May 30. An expansion project is also underway in its Shenyang plant.

GM and its Chinese joint ventures sold 231,183 vehicles in the Chinese market in May, up 21 percent year on year.

Home to Chinese truck producer Dongfeng Motor, Wuhan, capital of Hubei province, is vying with the northeast city of Changchun and southwest Chongqing Municipality for the title of “Detroit of the East.”

The city has planned to allocate 31.28 square km of land to develop the Jingang New District into an auto industrial zone. The Renault-Nissan Alliance announced earlier this year that it is looking to set up a joint venture with Dongfeng Motor in Wuhan to produce electric vehicles.