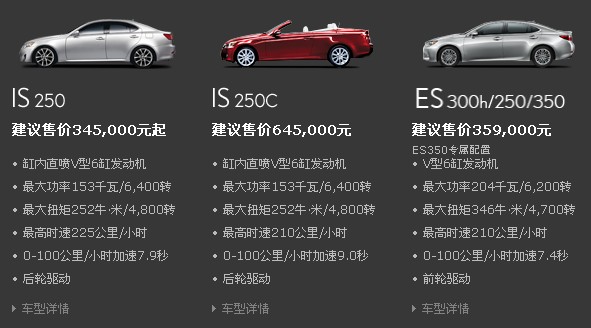 Lexus China denied that it has stopped importing cars, and said that some popular models, such as the ES300h, are still being imported, the Shanghai Securities News reported on Thursday.

“Strictly speaking, we just suspended imports of some models with large inventories,” the newspaper quoted an anonymous company executive from Lexus China as saying.

Lexus China, which is owned by Toyota Motor (China) Investment Co Ltd, adjusts the supply every month. The volume of imports in October was decided by the sales in September.

“That is a way to guarantee the interest of dealers. If we import a large amount of cars continuously, regardless of the dealers’ inventory, they will get increasing pressure, which is bad for Lexus’ development in China,” the company source said.

A sharp sales decrease in September disrupted Lexus’ full-year plans, and the imports of some models had to be suspended, the source said.

The company had planned to go full blast to secure its target in the second half, but September’s sale performance was a disappointment.

The company then decided to suspend some imports to evaluate the dealers’ sales performance in October.

“We can decide how many cars we buy from the company in October. If it’s not necessary, we can buy zero,” a dealer who declined to be named said.