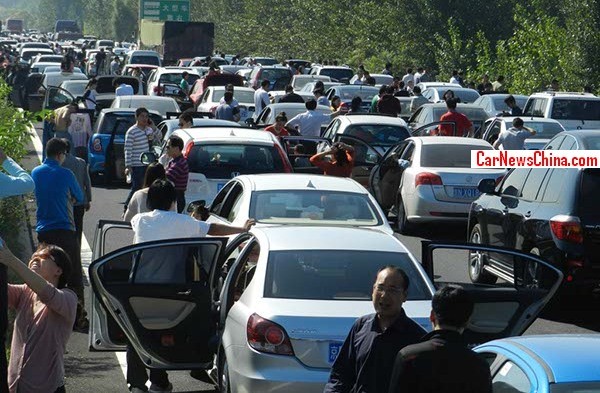 As pressure mounts on infrastructure and the environment, Tianjin will become the latest in a string of cities to restrict automobile purchases.

On August 6, the Tianjin municipal government released a guideline that said “responding to the increasingly congested traffic in the city, Tianjin will consider restricting car purchases and use in proper time to prevent the too-fast growth of the number of motor vehicles”.

The government also said in the document that it will build more parking garages, reduce parking on the streets and encourage residents to use public transport.

Statistics from the municipal traffic administration show that Tianjin had about 2.4 million vehicles on the road by the end of January. More than 70 percent of newly registered vehicles in the city last year were privately owned.

Without a specific timetable, the guideline is widely seen as a declaration that the Tianjin municipal government will curb car purchases.

But the announcement might cause panic buying in the short term and is not good for a healthy development of the auto industry, said Zeng Zhiling, director of LMC Automotive Asia Pacific Forecasting.

Zeng said restricting car use instead of purchases is a more effective way to ease traffic because congested cities already have a large number of vehicles on the road.

Limiting new car sales is not a good way to reduce pollution either, because pollutants mostly come from old cars on the roads, he added.

Despite such questions, the trend is clear that more cities are following the lead of Beijing, Shanghai, Guangzhou and Guiyang to limit car buying.

Just two months ago, the government of Shijiazhuang, capital of Hebei province, announced it would prohibit families from buying a third car starting at the end of this year. The city government vowed to prevent the number of cars on the road from exceeding 1.9 million this year and to keep it to a maximum of 2.1 million by the end of 2015.

The association estimated that the possible restrictions might cut vehicle sales by 400,000 units a year, equivalent to 2 percent of total domestic sales.

In Beijing the quota policy has dampened the market. In the first half of this year, new car sales in the capital city totaled 279,400, a small decrease from the same period last year when 281,200 vehicles were delivered.

Yan Jinghui, assistant general manager of the Yayuncun Automobile Trade Market, the largest in Beijing, said it is unlikely 600,000 new cars will be sold in the city this year.

Different from Beijing’s lottery system, Shanghai auctions license plates to control sales. Driven by strong demand, the price of a new car plate in the city reached a peak of 90,000 yuan in March – the cost of a new Volkswagen Polo, which makes it hard to find buyers for cars in that price range.

To cool bidding, a price ceiling was enacted by the municipal government in April. Last week, it also decided to shorten the auction time from 90 minutes to an hour.