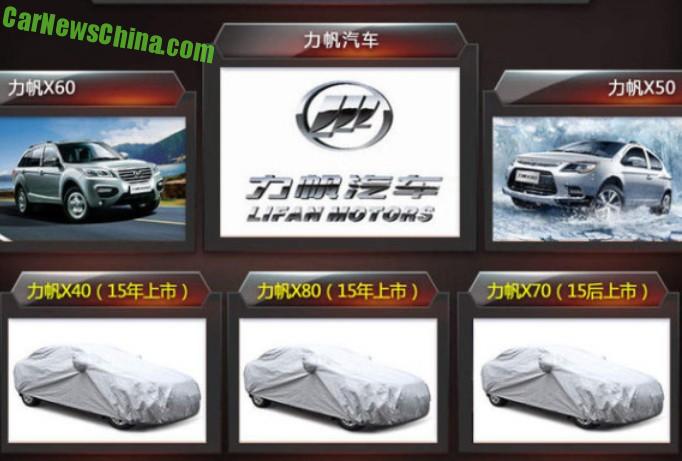 Lifan Automobile is on a roll in China. The Lifan X50 SUV was launched on the Chinese car market last month, the Lifan Lotto mini MPV will launch later this month, followed by the new Lifan 820 sedan and the facelifted Lifan 720 sedan in Q1 2015. But that ain’t all…

The brand will launch three brand new SUV’s, making for a full line-up of five.

The Lifan X40 will be a sub-compact SUV that will be positioned under the Lifan X50. It will be launched in mid-2015. Price will start around 40.000 yuan and end around 65.000 yuan. There will be two four-cylinder petrol  engines available: a 84 hp 1.2 that will also serve in the Lotto, and a 92hp 1.3 that also serves in the X50. Lone transmission will be a five-speed manual.

The Lifan X80 is a new full-size body-on-frame SUV that will compete with cars such as the Haval H9 and upcoming Changan CS95. The X80 will be launched in the second half of 2015. Price will start around 170.000 yuan and end around 240.000 yuan, making it the most expensive Lifan ever, by far. There will be a five and a seven-seat version. No news on engines yet but Lifan needs at least a 200hp 2.0 turbo to compete in this segment.