BYD Dolphin Unveiled On A Game Show In China, And You Can Have It In “Pupu Pink” 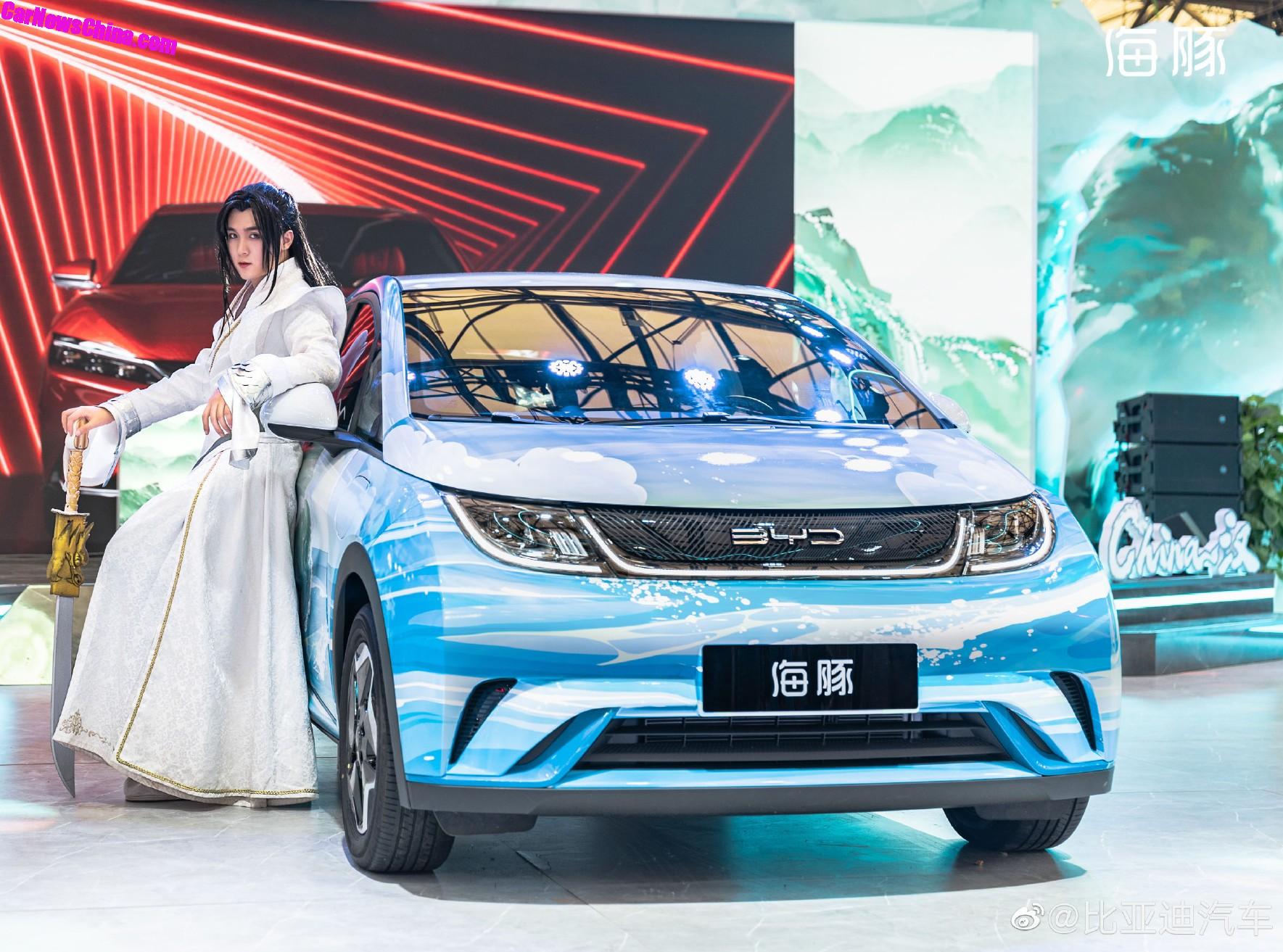 The BYD Dolphin is a brand new compact electric hatchback that will be sold all over the world. It is aimed at young tech-minded folks. BYD therefore unveiled the Dolphin on ChinaJoy 2021, the largest game show in China.

The Dolphin is the first BYD to be based on the new “e-platform 3.0” electric vehicle architecture. This platform will also underpin a series of upcoming semi-premium electric cars, including a sedan and a crossover. Size of the Dolphin: 4070/1770/1570, with a 2700 wheelbase. 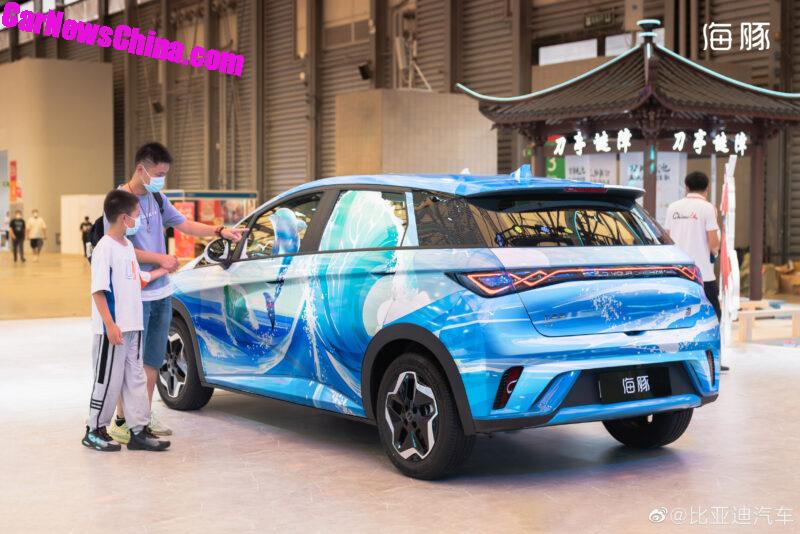 It is also the first BYD designed under the a new design language called “Marine Aesthetics”,with lines that flow but that are sharp at the same time. The language was developed by BYD’s chief designer Wolfgang Egger.

The Dolphin is equipped with a permanent magnet synchronous motor with a maximum power of 95 horsepower and a maximum torque of 180 Nm. The motor is mated to BYD’s new Blade battery pack, with either 30.72kWh or 44.928kWh. The corresponding NEDC range is 301 km and 405 respectively. Top speed is 160 km/h.

So far so simple. But, as so many Chinese automakers, BYD prefers to make things more complex they they need to be. That’s why there are actually two Dolphins, one called the Dynamic and one called the Neat (translated from the Chinese terms, BYD may come up with other English names later on). 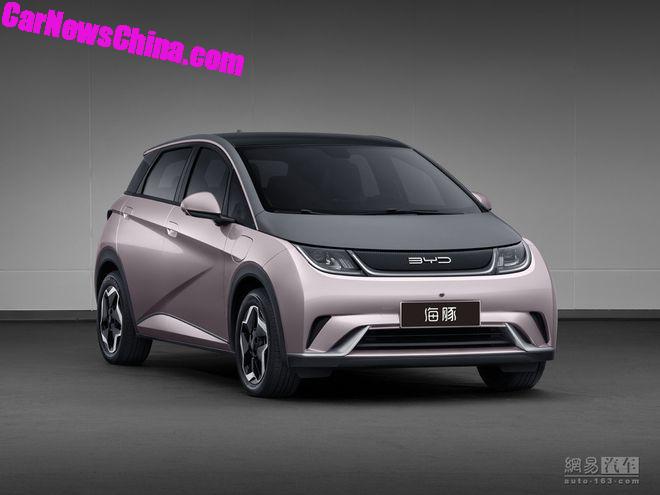 The Dynamic is the sporty one, with large ‘air intakes’ in the bumper. 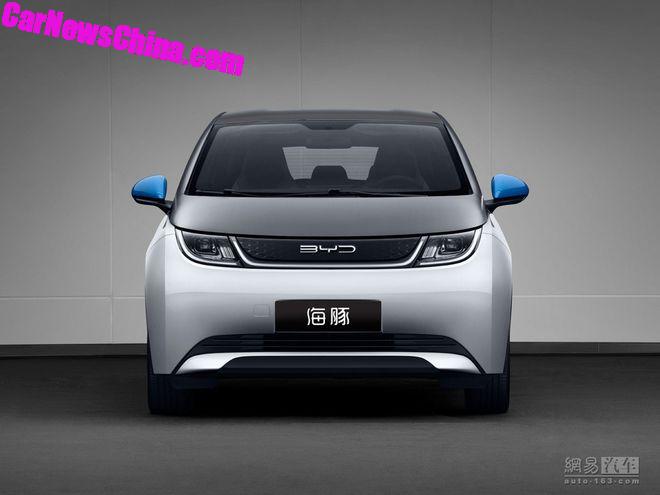 This is the Neat, with a much simpler bumper design. 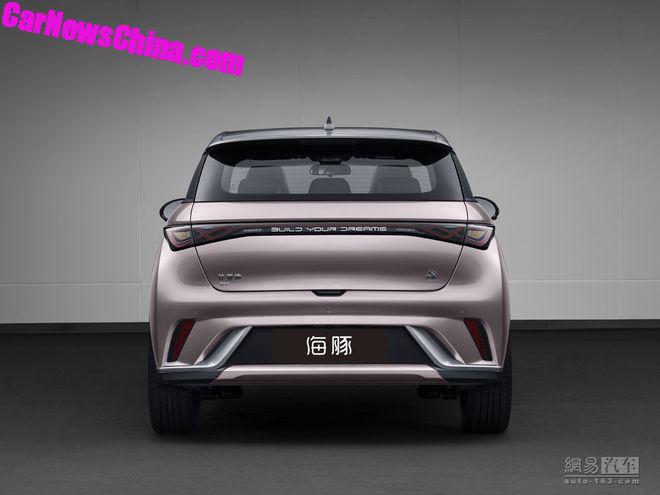 Same story at the rear. The Dynamic has a wild ass. 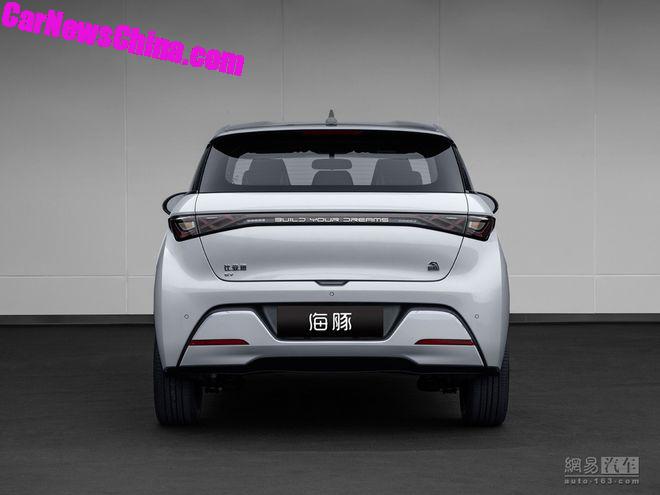 And the Neat has not.

The differences between the two versions are rather small. One may wonder why BYD even bothered. Wonder on…

BYD announced the color names as well, and because the Dolphin is aimed at young customers, the color names are properly hip. The hippest is definitely this Pupu Pink. Pupu refers to a style of Hawaiian/American-Chinese food.  BYD’s image implies ‘pink’ comes from a sunset at a tropical shore. The other color names also imply a Hawaii connection: Surfing Blue, Honey Orange, Spirited Green, and Iuminous Blue. Last one is odd, there is no such word as iuminous. BYD probably meant Luminous. 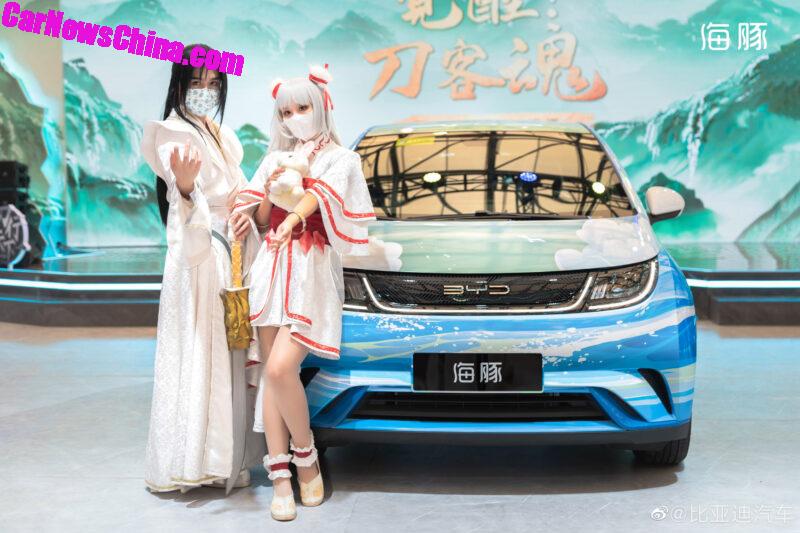 Chinese game shows always come with a lot of cos play computer game fun, just like in Japan and South Korea. 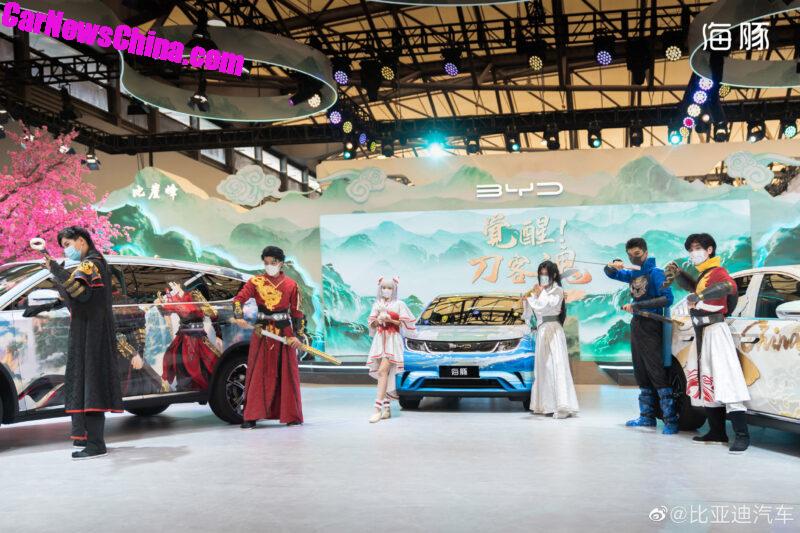 The BYD gang on stage. 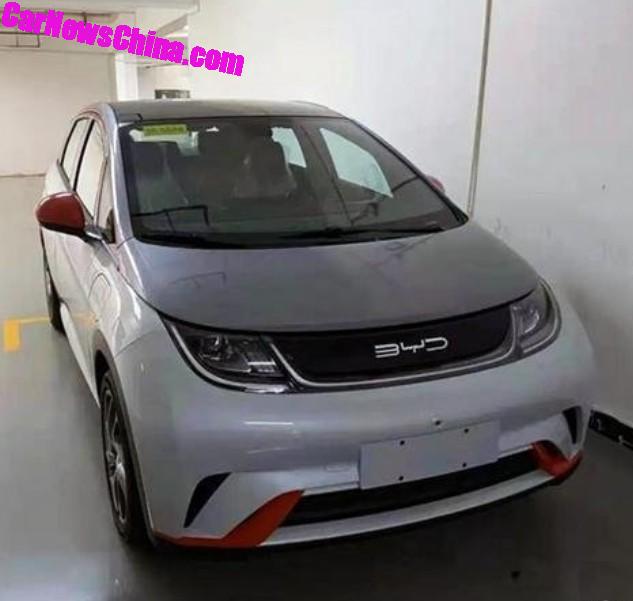 We got some live pics too. The Dolphin is also the first BYD to use the new BYD logo. It willed be rolled out over the entire range soon. This car is the Dynamic in Honey Orange. 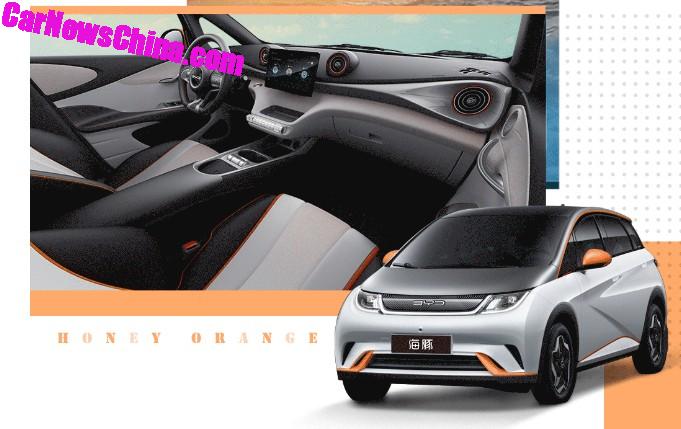 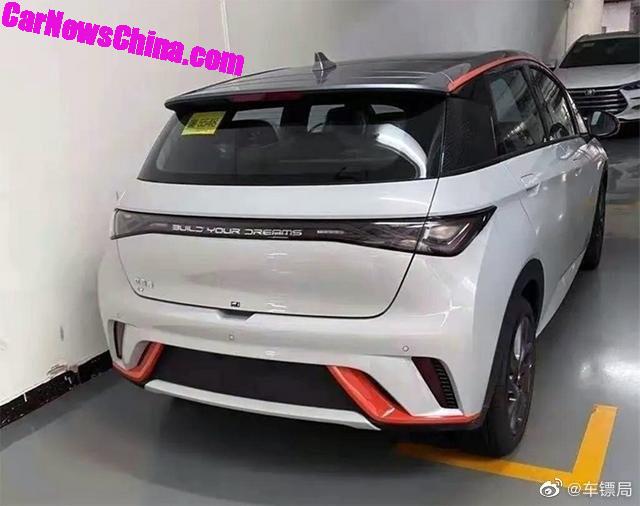 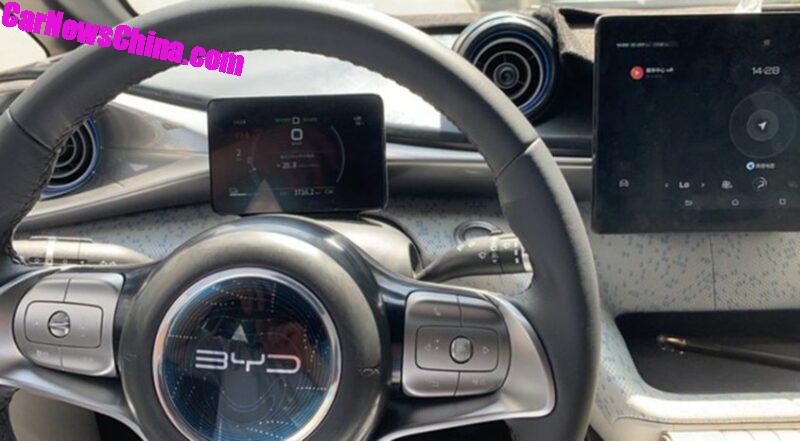 First live pic of the interior, looking really cool, with very arty trim. Look at the steering wheel center! There is a very tiny screen for a dashboard and a larger one in the middle. 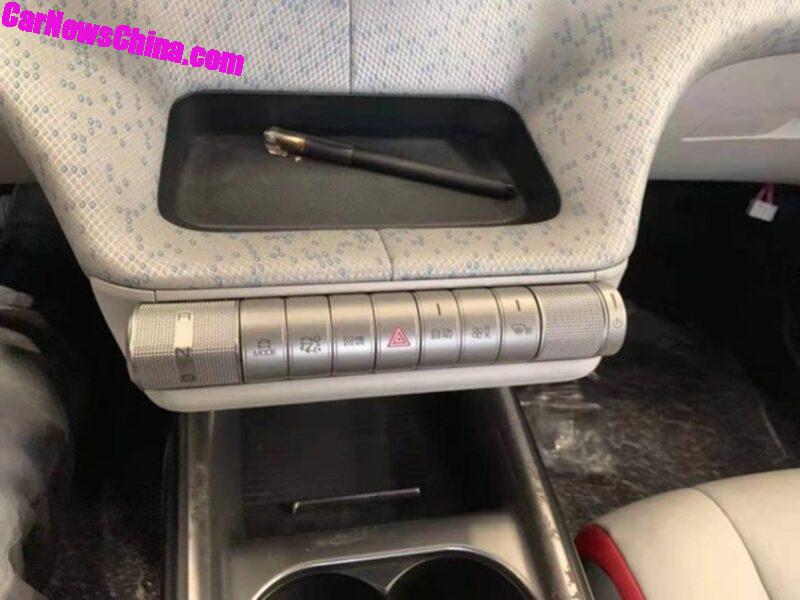 The center stack is brilliant, with a phone charger and. The R/N/D selector sits on the far left. BYD even designed a new icon for the warning lights! On the far right a switch for the volume control. 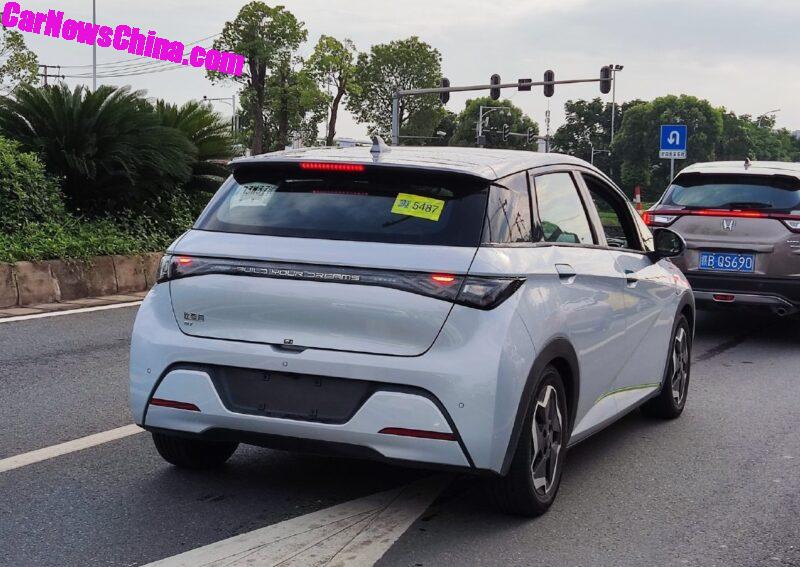 One on the road.

The BYD Dolphin will hit the Chinese market next month. It will also be sold in various other markets around the world, including in the European Union.