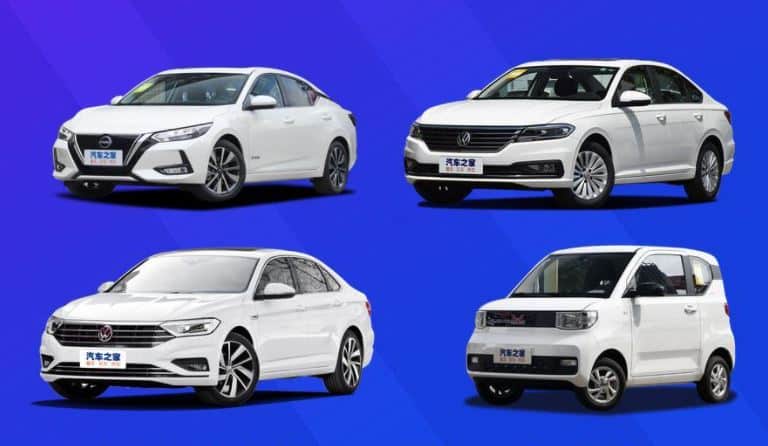 The Bluebird Sylphy is a mid-sized sedan. In 2009, Nissan Motor signed an agreement with Dongfeng Motor to build the Bluebird in China.

Initially launched at Auto China 2008 in Beijing, the Lavida – a four-door compact sedan, has been the best-selling Chinese sedan for many years. The newest 2022 Volkswagen Lavida is equipped with a 1.4T petrol engine with a maximum power of 110kW and a maximum torque of 250N·m, matched with a 7DCT gearbox.

FAW-Volkswagen started producing the Sagitar in 2006, with production now based in Changchun and Chengdu in China. The Sagitar is based on the Modular Transversal Toolkit (MQB) platform. It is available either with a 114 horsepower 1.2-liter or a 148 horsepower 1.4-liter turbocharged stratified injected gasoline engine.

The BYD Qin Plus was first unveiled at the 2020 Guangzhou Auto Show on November 20, 2020. It is equipped with a Snap Cloud-plug-in hybrid 1.5L high-efficiency engine with a maximum power of 81 kWh, peak torque of 135 N·m, a top compression ratio of 15.5:1, and maximum thermal efficiency of 43%.

The first long-wheelbase version of the new BMW 3 Series sedan (3 Li) designed for the Chinese market was unveiled in 2012, targeting the young and progressive Chinese customer segment.

The Honda Accord first debuted in the Chinese market in 1999. It is one of the cheapest Japanese D-segment sedans in China, with prices starting from 169,800 RMB or 26,000 USD.

The BMW 5 Series was first manufactured in 1972 as an executive car. The current long-wheelbase version of the BMW 5 Series sedan (5 Li) designed for the Chinese market first premiered at Auto China 2020 in Beijing, but the 5 Li has been around since 2008.

In addition to the longer wheelbase, the Chinese market version comes with high-quality equipment options, including the panoramic sky lounge glass roof and the Fond-Entertainment Professional with two tilt-adjustable touch screens. The new BMW 5 Series for China also has a more distinctive exterior design and is equipped with advanced driver assist systems, operation, and networking.

The Bora is based on the Modular Transversal Toolkit (MQB) platform. It is available either with a 111 horsepower 1.5L naturally aspirated engine or a 148 horsepower 1.4L turbocharged powerplant. There is now also an electric version called the e-Bora.