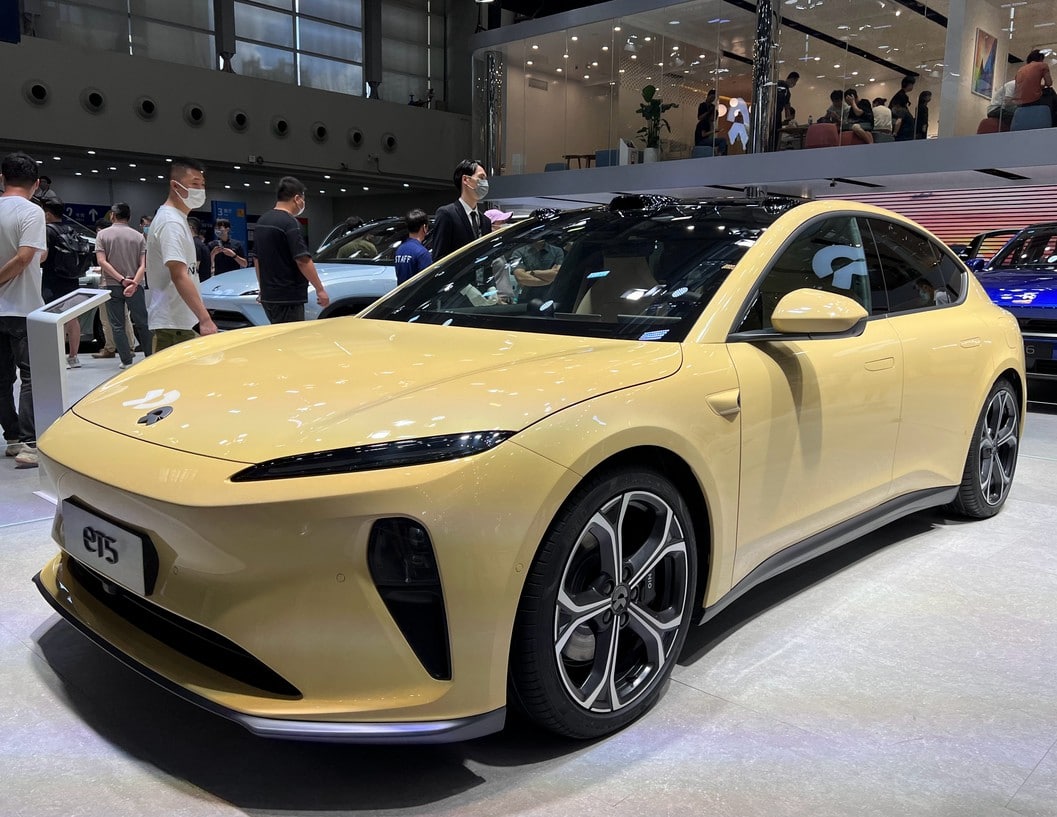 The new NIO ET5 was on full display at the 2022 Guangdong-Hong Kong-Macao Greater Bay Area Auto Show in Shenzhen, China. During the show, NIO released a frunk full of new details on this interesting new Chinese electric car.

NIO say it developed the 4-piston fixed brake calipers for the ET5 in-house, which is quite rare for a mass market car maker.

NIO has placed the steering gear (green) in front of the driveshaft, as seen here on an inage of the front set-up, without the motor, which normally sits immediately behind the drive shaft. NIO says the placement of the steering gear makes for easier maneuvering in sharp turns. That may be true, but it seems mostly a smart packaging solution; with the steering gear ‘out of the way’ there is more space available for the motor installation.

NIO claims a 50:50 weight distribution ratio, a very low center of gravity at 482.6 millimeter and a wheel track of 1,685 millimeter. The whole setup looks extremely low, especially when see from the front. This indeed, is a great example of the often-mentioned ‘skateboard’ chassis of electric cars.

Since about two years, Chinese car makers compete with one another to see who can come up with the weirdest color names. And apart from the names, car makers also add all sorts of poetic descriptions to these colors. NIO has joined the competition. There are eight colors available. The one of the pic is called ‘First Light Kiss’, and is explained in this way: “Romantic as the pink sheen when the first rays of the sun kiss the clear sky on the Solar De Uyumi in Bolivia.”

Yeah. And they make a mistake. It is Salar De Uyumi, not Solar. The name refers to the Salar De Uyumi salt flat in Bolivia. It is a rather barren place, the only real connection with pink is the rare pink James’s flamingo, a bird, that lives in the area. But NIO mentions no flamingo. Some of the other colors are Sunbathe Yellow (Mellow as the contour of the clouds blended into the gleaming sunrise over the horizon.), Airpace Blue (Deep as the infinity of the universe, kindling curiosity and wonder).

The minimalist interior of the NIO ET5, almost too basic for such an otherwise high-tech car. It has a surprisingly large steering wheel, a letterbox instrument panel, a 12.8 inch touch screen in the center, and NIO’s NOMI digital assistant on dash top. NIO calls NOMI an “AI companion” and claims it can be activated by just looking at it, which must mean it is actually looking at you all the time. NIO also says the AI allows for “a free-flow conversation”.

The center console seems a bit gray-plastic on the photo. NIO didn’t open the doors on the show, so perhaps the interior isn’t fully ready yet. There is a large wireless charging pad on the left, a twin-cup holder on the right, and a cool drive-selector on the left, next to the buttons.

The ET5 will get the latest version of the NIO Autonomous Driving (NAD) system. The sensor suite is called NIO Aquila Super Sensing. It includes a LiDAR, seven 8 MP high-resolution cameras, four 3 MP light-sensitive surround-view cameras, one ADMS (Advanced Driver Monitoring System(that’s NOMI), five millimeter-wave radars, and 12 ultrasonic sensors. The input of these camera’s is handles by the NIO Adam “supercomputer” that can process 8GB of image data per second.

Note the LiDar above the windshield, flanked by two high-resolution cameras.

The ET5 is the first NIO that will be manufactured at NIO’s new fully owned ‘NeoPark’ factory in Hefei, Anhui province. The NIO ET5 seems to be an impressive package with a shipload of tech on board, enough power, and a good range. The interior, however, is slightly underwhelming, but NIO is likely still working on that.