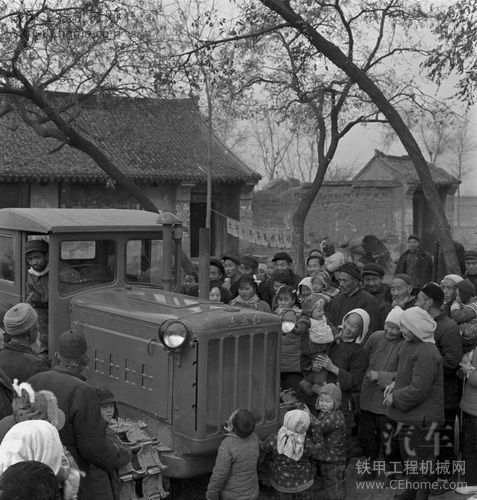 A late Sunday afternoon, time for more China Car history! This is the mighty Dongfanghong Type 54 crawler-tractor, China’s very first self-made tractor that could be used for heavy work in the field and for construction. The first Dongfanghong, meaning ‘the East is Red’, debuted on July 20 in the year 1958. 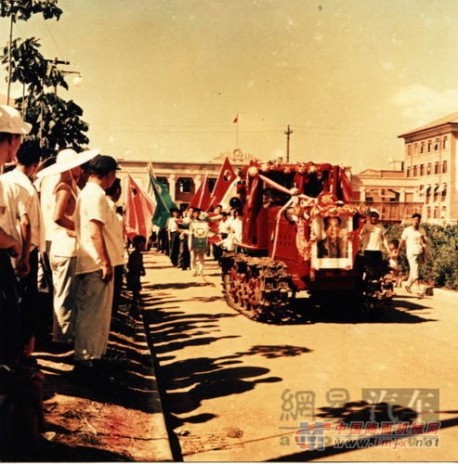 A colored picture from the first Type 54 just coming off the line, party time, it carries a portrait of Mao Zedong up front. The Type 54 was made by the ‘First Tractor Factory’ in the great city of Luoyang in Henan Province. Development started in 1955. The project was considered so important by the central government in Beijing that the best automotive engineers from all-over China were ordered to work in Luoyang. The Soviet Union, by that time China’s very best friend, also send engineers to help. 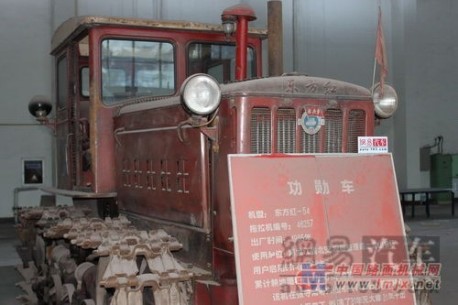 A Dongfanghong Type 54 at the factory Museum in Luoyang. About 350.000 were made, widely used on China’s massive state-owned collective farms, in construction and by the army. Power came from a 27hp diesel engine that was made by the Tianjin Tractor plant. The Type 54 was about 3.5m long, 2.7m high and 2.2m wide. 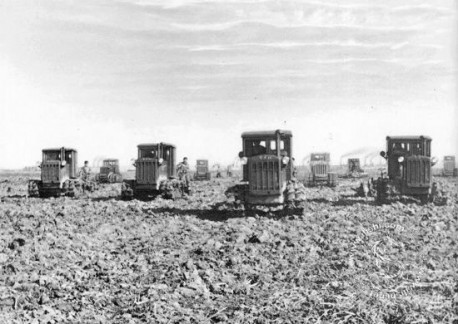 Type 54 at work. The importance of the tractor was huge, its birth was celebrated as a huge achievement. China was in those days still a very agricultural society with a fast growing population that needed food, and quickly. Farming however was done by hand with a little help from the ox and the horse. Farmers had no way to keep up with demand, the arrival of the Type 54 changed all that almost immediately. 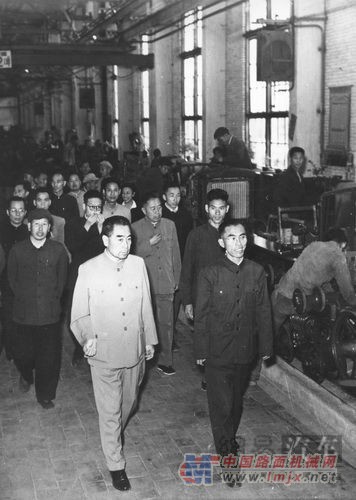 The popular Premier Zhou Enlai (in light Mao-suit) visited the factory on October 12 1959, a visit like this was always called an ‘inspection’ by Chinese state media, a tradition that continues until today. 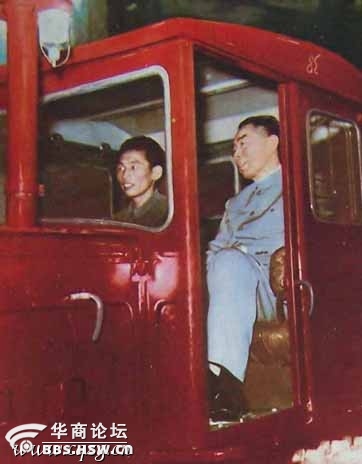 Another colored old picture, Zhou Enlai trying the tractor. The man next to him is Lu Fu, 27 at the time, a machine-tool expert that was send to Luoyang from First Auto Works in Changchun. He was honored as a ‘model worker’ and therefore chosen to accompany Zhou Enlai, explaining the technical details of the Type 54. 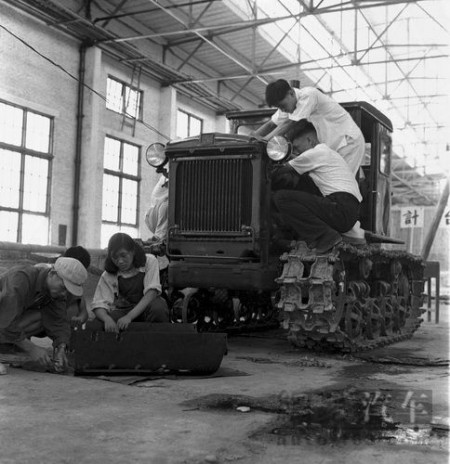 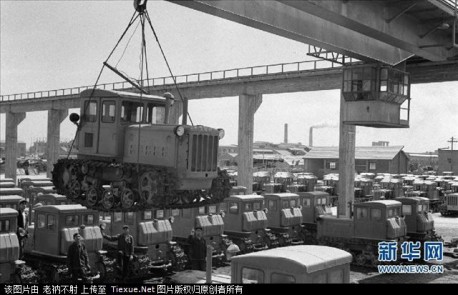 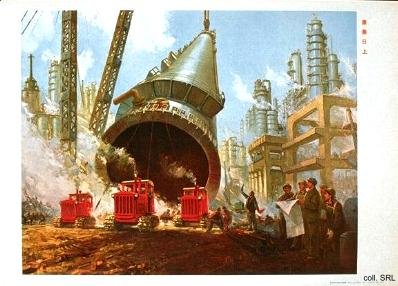 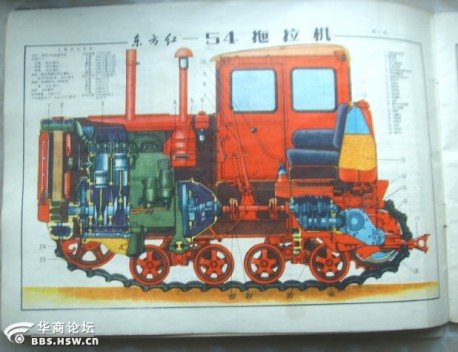 Technical drawing of the Type 54. In the late 1960’s when wheeled tractors became available and proved to be more economical in the field the Type 54 was turned from pure tractor to a bulldozer. As a bulldozer it still worked perfectly fine and many more were made. Production of Dongfanghong-branded bulldozers is still continuing today, more on the bulldozers in a later story. 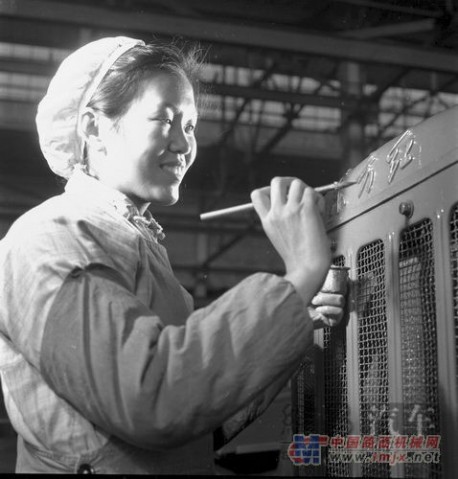 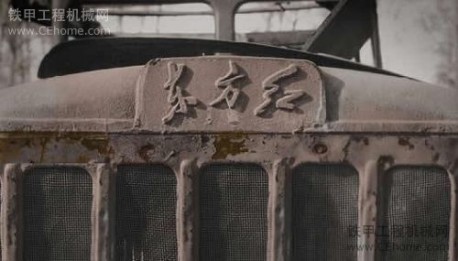 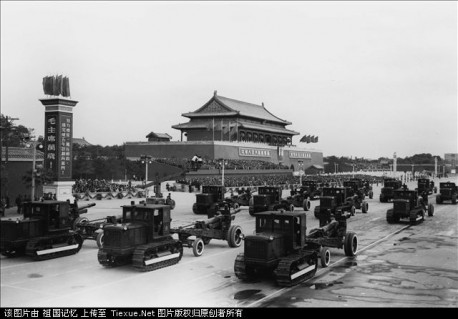 Dongfanghong Type 54 in its military role, towing artillery guns during a military parade on Tiananmen Square in 1959. 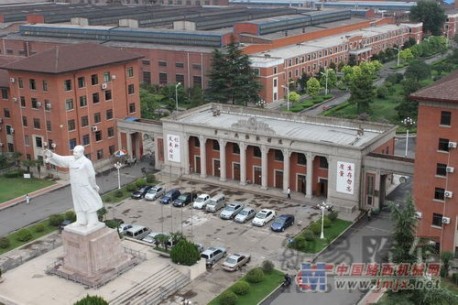 The massive gate to the oldest part of the factory today, huge statue of Mao Zedong still stands. The name ‘First Tractor Factory’ is still in use, abbreviated as the YTO Group Corporation. The make all sorts of tractors, bulldozers and other construction equipment under the Dongfanghong brand name.