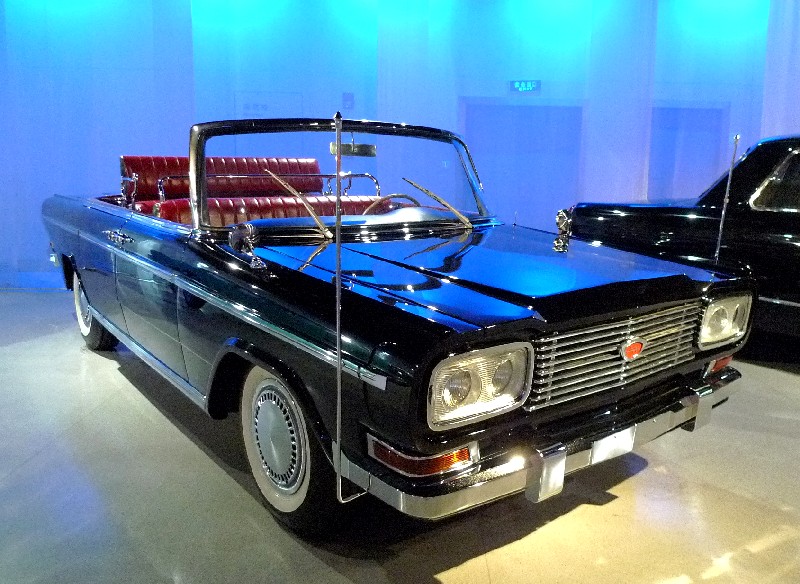 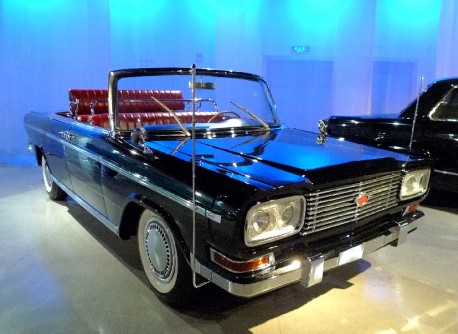 This is the fantastic Shanghai SH761 parade car from the Shanghai Car Museum in Shanghai. It was made in 1970 and was used to show high ranking foreign visitors to the masses. The king or president would sit rather uncomfortable on a hydraulically lifted rear bench in the back of the vehicle. The ‘royal seat’ was so high that the curious populace could see all until the buttocks. The visitor was supposed to wave his hand and smile…

The Shanghai SH761 was a gigantic hand-made machine. It was based on the platform of the much smaller Shanghai SH760A sedan. The engine came from the SH760A too, a very old 2.2 liter six-cylinder with 90 horsepower. Weight was about two ton and fuel consumption about 13 liter per 100 kilometer. Shanghai Auto claimed a 100km/h top speed but during parades the car wouldn’t go any faster than five. 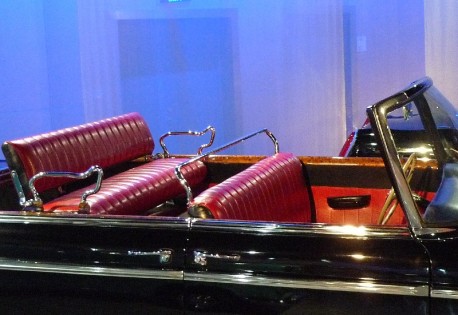 The elevated rear bench. Beautifully crafted with red leather and lots of chrome! The handle bar on the front bench was especially constructed for the honorable visitor to hold his hand. One hand that was!, the other hand was for waving. The bar was no luxury, if the driver took a corner a bit too fast or tight the visitor could easily fall out of vehicle. Strangely, it is unknown whether this ever actually happened. 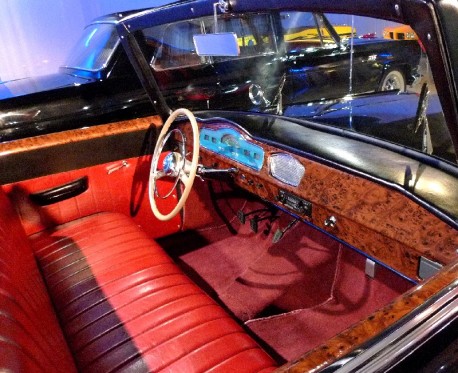 The beauty continues on the driver’s side. Red leather again and a shipload of wood. The steering wheel, controls, dials and pedals are all straight from the SH760A. Gear lever is mounted to the steering column. 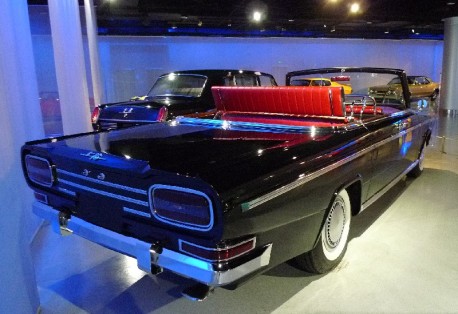 A very long rear deck but upon inspection it turned out that it could not be opened. No space for luggage in the SH761!  The visiting VIP’s couldn’t take their stuff on parade, but anywayz, what did they need..? 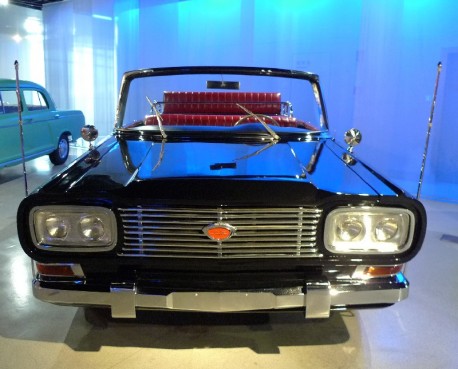 A truly brilliant motorcar, but! This very vehicle is also the subject of an intense controversy. Chinese experts on old Chinese cars disagree passionately about the origins of this SH761. The fight is rather simple: the believers say this is a real 1970’s SH761 parade car. The non-believers say it is a fake, made much later.

This is what I know for sure: Shanghai Auto Works made 14 SH761 parade cars between 1965 and 1971. From these 14 only four survive until today. The whereabouts of these four vehicles are well known and well documented. The SH761 in the Shanghai Car Museum suddenly popped up in 2010 when the museum opened, making it surviving car number 5. The experts were astonished! Biggest problem is that the museum’s parade car loox rather different than the other four. 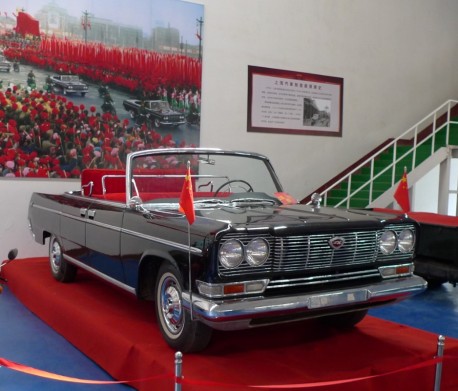 This is one of those, in the China Classic Car Museum in Beijing, later on much more about this museum! The front is very different. Lights, grille and bumpers all differ. The back is different too with much more simpler square lights. The base bodywork however is very similar.

Once again the Shanghai car. The non-believers basically say they didn’t know about the vehicle’s existence, and thus it must be fake. Not a very strong argument indeed but it is strange that the vehicle managed to stay under the radar for so long. Interestingly, the museum says this SH761 is one of two, like some kind of special series within the already special SH761 series. If true, there must be another one, but did it survive? Nobody knows.

The believers say the vehicle is technically so similar to the other well-known cars that it must be real and made in the 1970’s. The museum doesn’t help its cause by being very secretive about where they got the vehicle from, making proper identification difficult.

Well, I have seen, touched and smelled the Shanghai car and the definitely-real Beijing car. Except for the differences in design bot vehicles seem so similar that it is almost impossible to believe the Shanghai car was made at a later time. But I am not sure. The Chinese experts are not sure either. The fight between the believers and non-believers has basically turned into a stalemate because none of the parties can prove the other wrong. The controversy, will likely continue for a while…

Thanks to Erik from ChineseCars.net for the tip and specs!