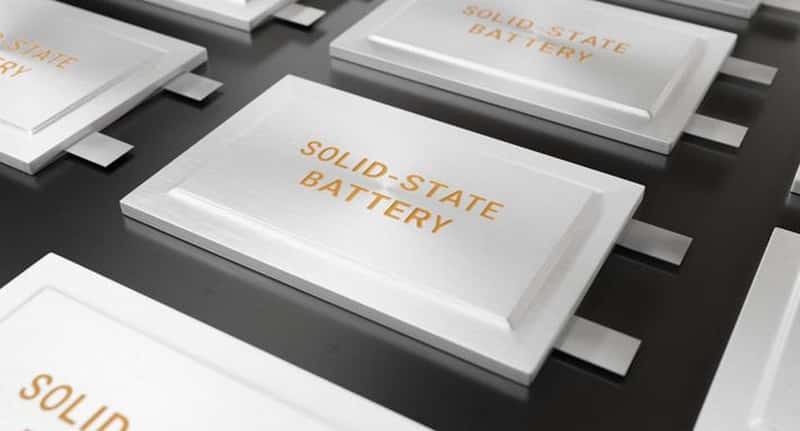 Did you know that lithium batteries were solid-state before they started using liquid electrolyte, as the batteries in our electric cars today? The liquid electrolyte was a necessary compromise to make lithium batteries usable, as relatively safe and durable, in electronics or vehicles. Last week, Dongfeng delivered a batch of test vehicles with solid-state batteries (SSB). Here’s why they are returning to the old technology.

A lithium battery cell consists of several parts. There’s a positive terminal (cathode), a negative terminal (anode), a separator between the two, and a medium through which lithium ions can move from one terminal to the other (electrolyte). During charging, lithium ions move from the cathode to the anode while their free electron (the ‘electricity’) moves in the opposite direction. During discharge, the process is reversed.

The capacity of a battery cell is determined by how many lithium ions you can store in a specific volume at a certain weight. How fast you can charge or discharge the battery depends on how easily lithium can move from one side to the other. Today, the Li-ion batteries’ chemical description shows the different solutions for this storage problem. For example, on the cathode side, Lithium-Iron-Phosphate (LFP) batteries have a dense and stable crystalline structure that stores lithium ions in tubes. This means the ions can move in only one direction. So moving to the other terminal goes relatively slowly. Nickel-Cobalt-Manganese (NCM) batteries store lithium in planes, meaning two dimensions for moving around. This chemistry stores more lithium in the same volume, moving around faster. On the downside, when lithium moves to the anode, the NCM-structure becomes unstable and would collapse if all lithium moved away. Some lithium has to stay behind, reducing the capacity advantage by a bit.

Battery manufacturers are interested in the SSB on the anode side. Both LFP and NCM batteries use carbon as an anode. Carbon stores lithium quite well, but some materials do it far more effectively. Adding silicon can improve the storage capacity of carbon anodes, but only to a certain degree. That’s why battery manufacturers would instead use lithium-metal compounds on the anode side because it stores much more lithium in the same space. In fact, the earliest Li-ion batteries started with a Li-metal anode.

The early batteries combined the separator and electrolyte into a single, solid element. Usually, it was made from a compound material that contained silver. This worked well for non-chargeable batteries, used in medical applications as early as the 1960s, but when scientists tried to make a rechargeable lithium battery, the problems appeared. The first problem was that the separator/electrolyte had very high internal resistance, so charging was slow and came with high energy losses. The second problem was dendrites. When the battery charged, lithium ions moved to the anode, but instead of being stored inside the crystalline structure, it formed solid lithium on the surface of the anode. This solid lithium is dead material, reducing the battery’s remaining capacity. And these solid lithium structures, the dendrites, kept growing at every recharge and eventually punctured the separator, causing a short circuit. That, of course, destroys the battery.

To commercialize the lithium rechargeable battery, the scientist did two things. First, they replaced the Li-metal anode with carbon. This solved the dendrite problem. Second, they replaced the solid electrolyte with an organic, liquid electrolyte. This solved the high resistance problem. And there was the basic design of the Li-ion battery we know today.

However, the chosen solution was not without its challenges. Carbon stores fewer lithium ions than Li-metal, so the capacity was reduced, and batteries became rather heavy, huge batteries for vehicles. One of the main concerns in the last decade has been increasing capacity (which equals lowering the weight). So far, developments have concentrated on the cathode side, as explained earlier with LFP and NCM. The liquid electrolyte was an even bigger problem because it’s flammable. As seen many times, overcharging lack of temperature management of external damage to the battery can have disastrous consequences, like explosions and fires. To solve these issues, a scientist never forgot about the solid electrolyte. If only they could solve the dendrites and the internal resistance problems.

The first solid-state battery appeared on the market over ten years ago. Scientists already knew that some solid materials are pure ionic conductors, and in the late 2000s, they were able to create solid polymer electrolyte. This solid electrolyte was made by dissolving a lithium salt in a polyoxyethylene polymer. It solved the internal resistance problem but didn’t take care of dendrites. Combined with an LFP cathode and Li-metal anode, this battery was commercialized by BlueSolutions and has been on the market since 2011. It was used in the Bollore Bluecar car-sharing program in Paris and is currently available on some Mercedes-Benz buses. The battery has an operating temperature of 80° Celsius and needs a heating system, so its overall pack capacity isn’t any better than liquid electrolyte Li-ion batteries.

So the prospects of the lithium polymer battery don’t seem to be very advantageous. Battery makers have identified two likely pathways for future SSB’s. The first is a variation of the old solution, Li-metal anode, and lithium oxide (Li-OH) solid electrolyte, and the other is the lithium-sulfur (Li-S) battery.

Let’s look at Li-OH first. The innovation is the use of lithium oxide as a solid electrolyte. This battery can use the current chemistries like LFP, NCM, or NCA on the cathode side. The anode is usually Li-metal, although sometimes pure lithium is suggested. The Li-OH electrolyte should offer better protection against dendrites. This pathway has one clear advantage as a transitional technology: it doesn’t have to be all-solid at once. The Ganfeng Lithium battery in the Dongfeng vehicle is most likely one of these transitional types: it has a primarily solid electrolyte. Still, it contains a small amount of liquid electrolyte as well. So it’s semi-SSB. Quantumscape in the USA and several Chinese battery manufacturers likely follow this route. Introduce a semi-SSB first and start reducing the amount of liquid electrolyte once the dendrite problem is more under control. Semi-SSB’s will begin to appear this, and next few years, real SSB’s using Li-OH are probably at least five years away. A wide range of new technologies is expected to appear in the short term.

Now Li-S. This is the kind of SSB Toyota is developing. The Japanese promised a full product reveal at the Tokyo Olympics but failed to deliver on that promise. The reason for it is easy to guess: a Li-S battery is extremely difficult to make.

So why try it? As you remember, battery capacity depends on how much lithium you can store in a specific volume. Lithium-sulfur has the highest storage capacity of known materials, so it’s very attractive to use on the cathode side. This is the chemistry that will lift capacity by 400 to 500%, in other words: the holy grail. The anode will most likely be pure lithium and the electrolyte of some ceramic conductor. If you read “super safe, super light, super-fast charging SSB,” this is often the configuration referred to.

Now, why is it so hard to make? There are two related difficulties.

First, when Li-S comes into contact with water, it reacts and produces a gas called hydrogen sulfide (H2S). H2S is corrosive, flammable, and toxic. When inhaled by humans (in large enough concentration), it has similar effects as cyanide, and it was used as a chemical weapon in the First World War. So the safety risk is clear. It also has the added disadvantage that using Li-S in mobile or wearable devices is less likely, due to the severe waterproofing required, limiting the market span.

This reactivity with water is also a problem during production, as our air contains water vapor. During an assembly in a standard atmosphere, Li-S produces some H2S gas that forms imperfections or defects on the surface of the cathode. These imperfections become the starting point for dendrites and seriously reduce the life span of the battery cell.

Second, there’s a similar sensitivity to other substances in our atmosphere, like particulate matter. These particles can also cause imperfections or defects at the cathode surface with the same negative result as water vapor.

So far, the assembly of Li-S cells needs to take place in a fully controlled environment, a dry and clean room. Information coming from Toyota is that they assemble Li-S cells by hand inside a glove box (small “aquarium” with sealed gloves attached, in which the operator can put his hands) with a 100% Argon atmosphere. Argon is a mostly non-reactive element. Of course, this production method is not scalable, and it would be absurdly expensive to make an EV battery this way.

These were the SSB basics explained, as the article’s title promised. With this knowledge in hand, we can glance towards the future of battery technology. A step-change in technology is about to take place. Several manufacturers are very close to marketing their first SSB’s. In the first place, this will be semi-SSB of the Li-OH type, with a small amount of liquid electrolyte remaining. There is some risk of disappointment because these semi-SSB’s will not be the holy grail of battery technology. They will have better capacity than the current Li-ion, but probably not by as much as many people hope for. And they will be expensive at first. The big step of, let’s say, doubling capacity is still quite a few years into the future. But I guess by the end of the decade, there will be affordable, high-capacity SSB’s available.

The real holy grail of the Li-S battery has a much more uncertain time path. Because it’s such an attractive technology, several companies (not just Toyota) pursue this path. Still, the challenges to reach mass production are enormous, and no one has any idea of production cost yet. I can’t give you any believable prediction; it’s a case of “let’s wait and see.”