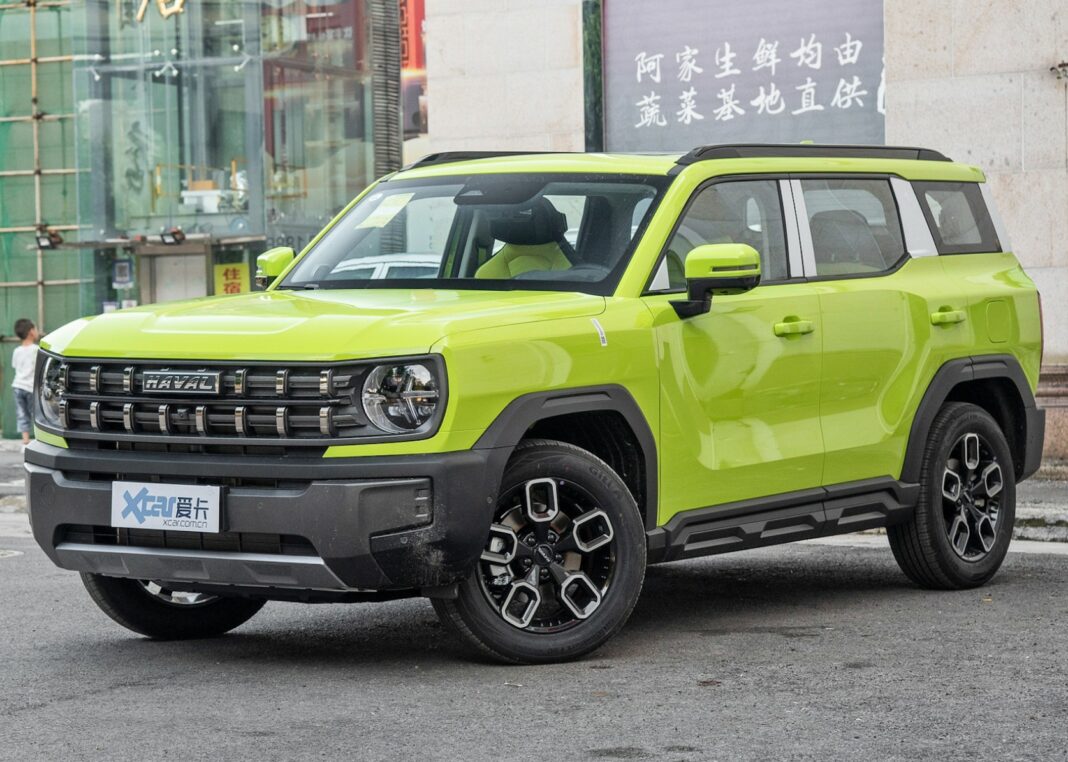 With all the news about Tank, Wey, and ORA, one might almost forget about Great Wall Motor’s (GWM) good old Haval brand. To prevent this horror from happening, the company comes up with the Haval Cool Dog, a new Chinese SUV with a striking and seemingly unforgettable design.

The Cool Dog is a compact SUV positioned below the Haval Big Dog. It has a boxy off-road design with a straight nose, a high waistline, and short front and rear overhangs. Size: 4520/1875/1745, with a 2710 wheelbase. The car looks rather rugged with black cladding over the wheels and below the doors. The A-B-C pillars are painted in silver, no matter the body color. That may work fine with a black car, but it looks a little odd on this green one.

The Cool Cat’s design is most interesting at the rear, with a very narrow window, and a spare wheel cover that extends upwards into said window. The D-pillar is very narrow, there is a racy brake light atop of the roof, and basic looking black bumpers. A bit of a strange mix of design elements, but it somehow works.

The interior is off-roady too with straight lines, solid plastics, and a wide center tunnel. There is some decoration in the form of faux-carbon panels and fancy yellow-black leather seats.

The graphics are very good, showing the GPS in the middle here, and various other functions on the sides.

The main screen for the infotainment measures 12.3 inch. The infotainment system is equipped with a KTV function, which is increasingly popular in China. Back in the early 2000’s, many Chinese car makers fitted VCD-based KTV systems in their cars, with tiny screens in the dash and in the back. Nowadays it is all cloud-based of course. The app in the Cool Dog is called Thunderstone, an app also installed in cars made by Tesla China, Li Auto, Lynk & Co, Weltmeister, Aion, and Leap Motor

Gear lever looks very manly. Power comes from a 1.5 turbo with 184 hp and 275 Nm. This engine is used in many other GWM cars. It is mated to a 7-speed DCT. Base versions will get front-wheel drive, top version four-wheel drive.

The Cool Dog is equipped with an 18-speaker JVC sound system, with fancy speakers in the headrests. We are seeing those a lot recently on new cars in China. However, it is the first time we see a JVC-branded audio system on a Chinese car. The Japanese firm hasn’t made much inroads in the Chinese car industry yet. The system in the Cool Dog was a jointly developed by JVC and GWM, with an investment of 28 million yuan. In the near future, other GWM cars will get JVC audio too.

The Haval Cool Dog is a five-seat car. The bench seems wide enough for 3 adults, and there is ample room for the legs and the heads.

The front is almost as interesting as the rear, with square shaped lights with round lenses and a grille with split vertical bars. Again, the bumper design is very simple, ready, or so it seems, do deal with any dent int he urban jungle.