Morgan to Come to China with Three-Wheeler 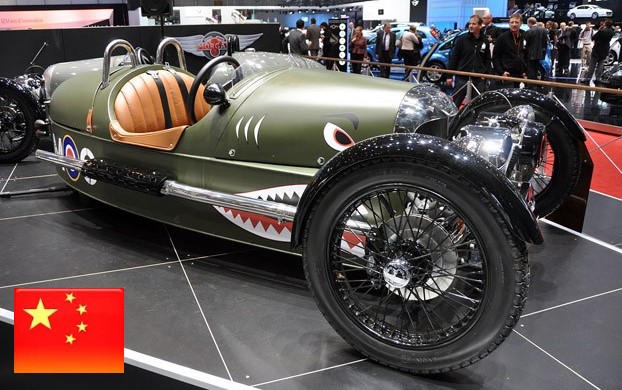 In a red-brick shed at the foot of England’s Malvern Hills, Morgan Motor Co. is preparing an unusual assault on the growing Chinese auto market.

Managing Director Charles Morgan said the 100-year-old company has created a model that will stand out from the crowd in Asian showrooms. That’s partly because the M3W is hand-built, wood-framed and based on a 50-year-old design — and mainly because it has three wheels.

“Try to sell a Ferrari and you’re up against Lamborghini, the Audi R8, Lotus, McLaren,” he said. “Send a Morgan three- wheeler there and they’ll know the difference.”

Morgan, known for retro designs harking back to the England of local composer Edward Elgar, is betting on the M3W to spur Asian demand as slowing economies crimp European and U.S. sales. The company said it has been approached by 20 potential Chinese dealers this year for the 25,000-pound ($39,000) successor to a series of three-wheel models it stopped making in 1952.

Other top-end automakers are also targeting China, where luxury sales may jump 39 percent in 2011 to 939,000, surpassing Germany as the No. 2 market after the U.S., said Jenny Gu, a Shanghai-based analyst at research firm LMC Automotive. British sports-car brand Lotus, a unit of Malaysia’s Proton Holdings Bhd, added its first Beijing dealership in October, even as Chinese consumer demand is forecast to slow as the economy grows less quickly.

Founded by Charles Morgan’s grandfather, Morgan said the company seeks to create a sense of “automotive theater” around its models.

“Products that combine design and authenticity are very attractive to the connoisseur, and Morgan appeals to somebody who wants those real materials,” Morgan said in an interview at the company’s base in Malvern Link. The family-owned company has chosen to remain a niche manufacturer and avoided overreaching to chase higher volumes, he said, something that led to the collapse of other U.K. carmakers.

The M3W, unveiled at the Geneva Motor Show in March, has just entered production with a backlog of 800 orders and reaches dealers next year. The open-top two-seater is powered by a two- liter Harley Davidson motorcycle engine made by S&S Cycle Inc. of Wisconsin, and will reach 60 miles per hour in 4.5 seconds before topping out at 125 mph, all at 50 miles to the gallon.

“They’re moving a little bit more towards the 21st century while retaining an extremely large dose of nostalgia to ensure that their products remain unique,” said Andrew Jackson, an analyst at Datamonitor in London. “It’ll certainly produce an interesting offering for China, where there seems to be quite an appetite for vehicles with a strong brand identity.”

The company will open its first Chinese dealers in Beijing and Shanghai next year and will also offer the three-wheeler via a Harley Davidson Inc. outlet in Hong Kong with the aim of selling at least 50 cars in the first year and 150 after three.

The push in emerging economies amounts to a “contingency plan” for coping with the weakness of traditional markets, with sales slow in the U.S. and “worse than flat” in Europe, said Morgan, 60, who joined the firm in 1986, when it was making 450 cars a year, after 10 years as a TV cameraman specializing in war reports. He succeeded his father Peter as chief in 1999.

“At least in China and India you know they’ve got money,” he said. “We’ve got a dealer in Greece, but I don’t think we’ve sold a car this year. If Greece expands into Italy, into Spain, into France, then we’ve got problems. Europe is on its knees and anything could happen. People could just stop buying.”

Morgan is also counting on the M3W to spur sales in the U.S., where it will be sold as a motorized tricycle to avoid a car import license.

The sales pitch to China will play on Morgan’s Englishness and dedication to traditional craftsmanship.

Ash frames, which the company said are best at absorbing energy, are built by carpenters at a site across the road from that founder Henry Frederick Stanley Morgan established in 1909, a mile from the house where Elgar wrote the Enigma Variations a decade earlier.

The company contracts tasks it’s not expert at, Morgan said, sourcing engines from Bayerische Motoren Werke AG and Ford Motor Co. and gearboxes from Mazda Motor Corp., as well airbags and brakes and from Continental AG and Robert Bosch GmbH.

“A product like the AeroMax or the three-wheeler has an immediate visual appeal,” Morgan said. “Some would argue that they’re really beautiful. And unlike most cars that are interesting for six months, when you come back from paying for the petrol the interest remains.”