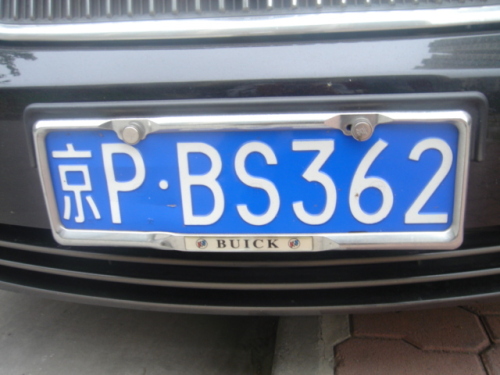 A record 1-million-plus people in Beijing competed for fewer than 20,000 registration certificates qualifying them to buy cars through a lottery system on Sunday. With a fixed number of car registrations issued each month and a lengthening waiting list, many potential car buyers are losing hope.

Some 1.05 million qualified applicants entered the registration lottery in August – 110,000 of them for the first time – and only 19,926 registrations will be issued, the city office in charge of the lottery system said on Saturday.

One in every 53 applicants will get the registrations, 80 percent fewer than in January last year, when Beijing introduced the lottery system to cap new car ownership at 240,000 a year.

“I haven’t checked the results today, but I don’t count on having luck this time,” said Jia Ruiming, a teacher in North China University of Technology.

Jia said he has entered the lottery every month since January 2011 without success.

“For the first few months, I was eager to check whether I got a registration as soon as the results were released,” he said. “I gradually gave up and would only check when I thought of it after many days.”

Jia said even if he is lucky enough to have won a registration on Sunday, he cannot buy a car because he lost hope several months ago and spent the money he had put aside for a vehicle.

Under the lottery rules, applicants who have failed to win in the past two months are automatically re-entered. This has exponentially added to the number of participants, and, with new registrations fixed at around 20,000 each month, the chances of winning have decreased greatly.

The number of cars in Beijing more than quadrupled from 1 million in 1997 to 4.76 million in 2010, according to the Beijing Municipal Commission of Transport. In 2010 alone, 800.000 new cars took to the overcrowded streets in the capital. By the beginning of this year, more than 5 million vehicles were on the road in Beijing.

“The license plate lottery is an administrative effort and cannot deal with the root cause of traffic congestion,” said a netizen by the name of 5786mm in Beijing. “A better solution is to increase parking fees and levy traffic fees.”

The Beijing Municipal Commission of Transport has said the lottery has contributed to easing traffic gridlock in the city.

However, in a poll the commission conducted last year, 75.7 percent of respondents said they did not think traffic was easing and only 8.9 percent approved of the lottery policy.

“I know that some people who don’t need a car also entered the lottery and got a registration,” Jia said. “Many people like me, who really need a car, have failed and get frustrated.”

“The problem is that the real needs aren’t being met, while people with little intention of buying cars are feeling compelled to enroll in the lottery,” Yang Hongshan, deputy dean of the department of urban planning at Renmin University of China, previously told China Daily.

Guangzhou, a city in South China, initiated public auctions and a lottery in July to limit the number of new car license plates to 10,000 each month.

Shanghai, the country’s financial hub, uses an auction to limit the number of license plates and the price of a plate keeps hitting new highs. They currently go for more than 60,000 yuan ($9,460).

Beijing has enacted a series of measures to fight heavy traffic in recent years. New measures this year include installing a smart parking-fee collection system to monitor and regulate parking along roads, and increasing the number of public bikes to encourage the use of public transport.

Car owners in Beijing may have to pay traffic fees, under a five-year plan released by the commission earlier this month.