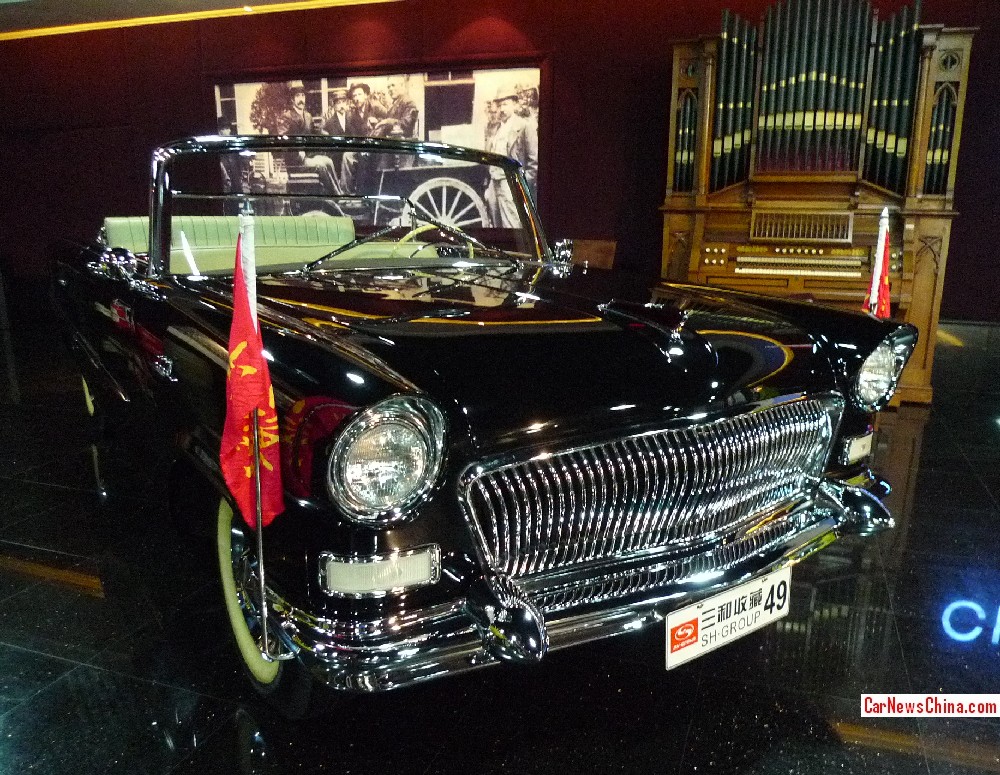 Parade cars were, and still are, used to parade head-of-states and high ranking official through town during visits of inspection tours. The dignitary would wave to the crowd that was lined-up along the streets waving flags and showing happy faces. 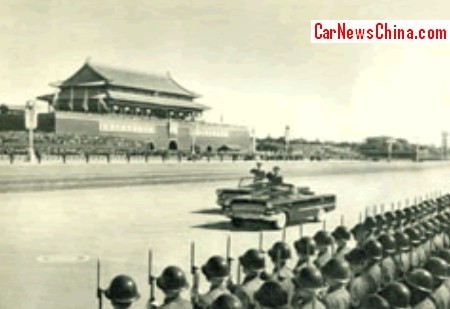 The CA72 Parade Car arrived in early 1959 and was first deployed during the military parade celebrating 10 years of  the People’s Republic of China on October 1 in the same year. This is a rare photo of the parade showing two CA72 Parade Cars passing the Tiananmen gate at high velocity. No happy faces here, military parades are serious business… 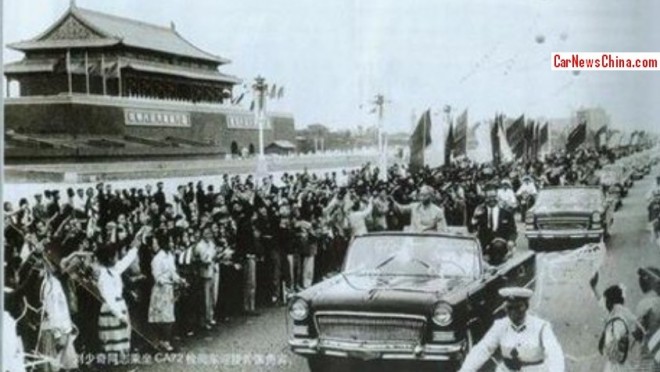 More fun here with President Liu Shaoqi and a very young Raoul Castro of Cuba in 1962. Tiananmen on the left again. Happy people waving with Cuban flags. To be paraded through town was an honor bestowed on visiting foreign dignitaries by the Chinese government. Those lucky enough usually hailed from other communist countries friendly with Beijing. 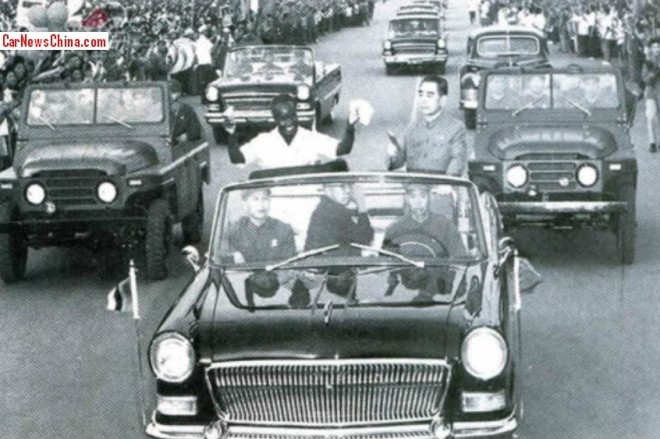 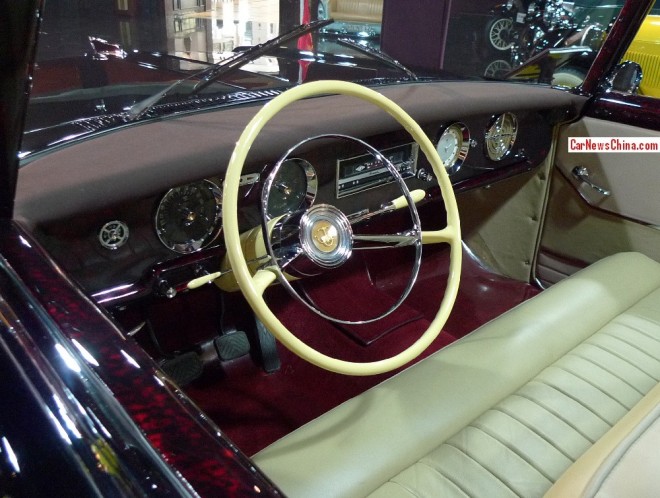 The Hongqi CA72 in the Sanhe Classic Car Museum was restored to the absolute max and likely in a better shape than when it was new. The museum has its own restoration workshop with magicians who mostly work for the museum but also accept work for private classic car collectors. The interior is a brilliant work of art with white leather benches, red carpets and loads of wood. All instruments, the radio, and the clock are correctly period.

The The Hongqi CA 72 was powered by a 217hp Chrysler 5.6 liter V8 which had to work hard to propel the 2500kg parade car to a decent speed. The CA772 sedan could do 160km/h but the parade car was much slower, top speed was an estimated 130km/h. However, even at 130 standing and waving is impossible due to the wind, so during parades speed was much lower again. 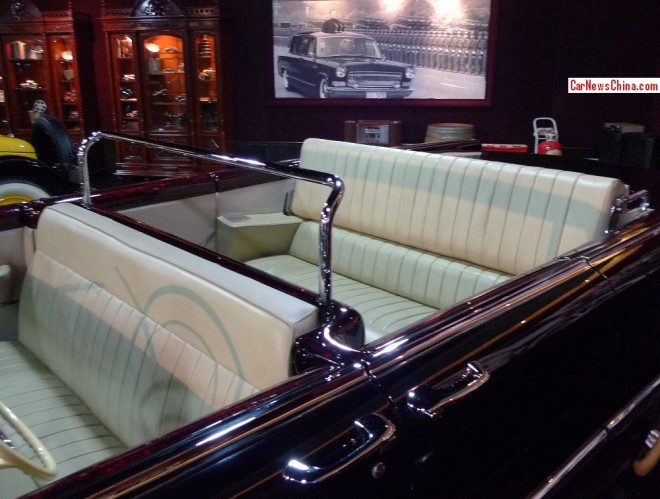 The parade compartment seen from the front with the handle bar located just behind the front bench. When not parading the dignitaries could sit comfortably on the back bench. 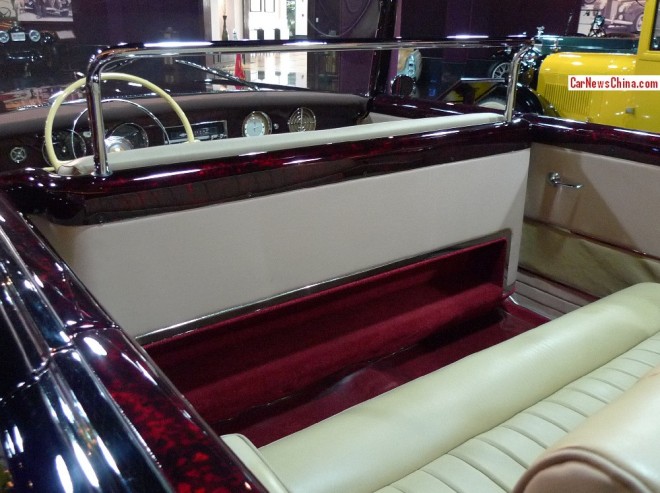 The Hongqi CA72 Parade Car is one of the rarest Hongqi cars ever made. Only four examples were manufactured, two in 1959 and another two in 1961. This particular car is a 1961 example, recognizable by its single handle bar stretching over the whole wide of the compartment. The 1959 cars had two separate handle bars. 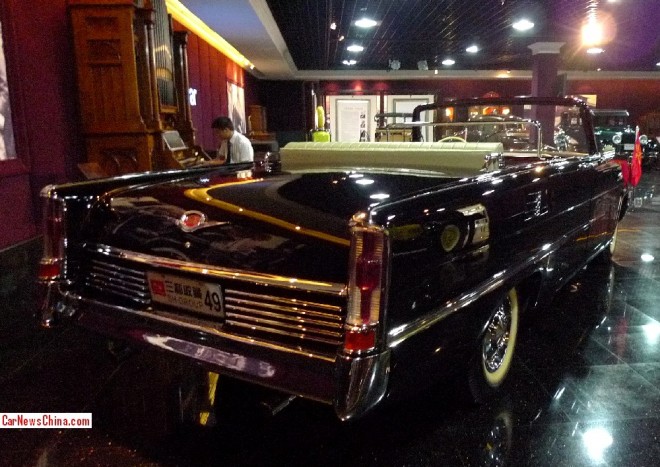 There was no one in the museum when I arrived. It was very dark so I switched on the lights and started taking photos. After about half an hour aa  men in a white shirt and black tie showed up. He nodded ni hao and settled himself at an old organ. The museum also houses a few other collections; including five large organs and some 20 old radios. 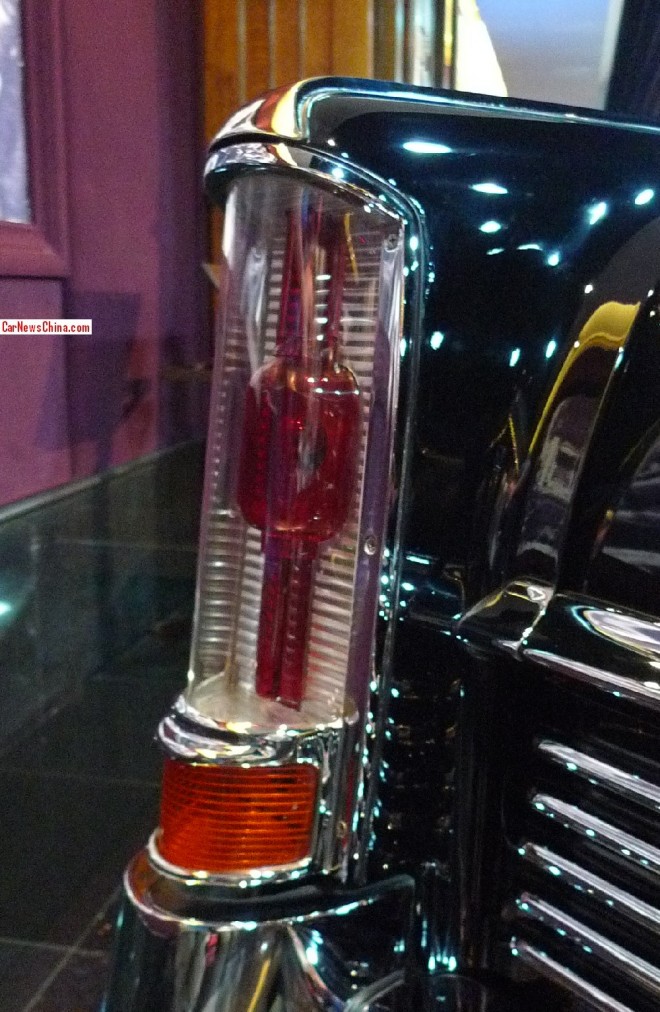 The beautifully crafted rear lights were designed to look like traditional Chinese lanterns. 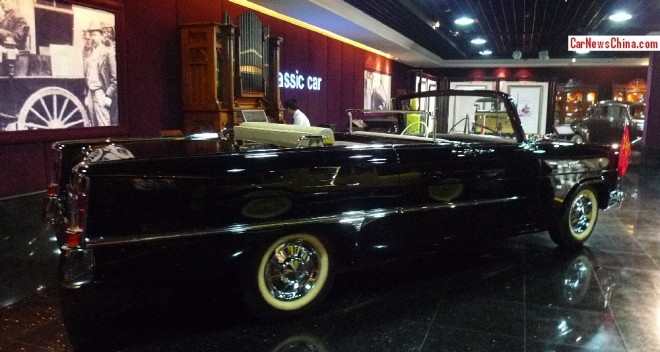 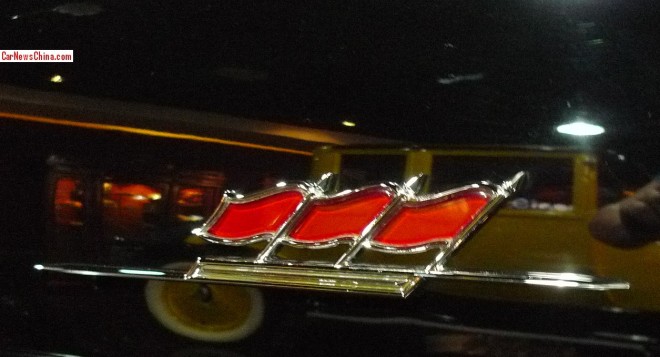 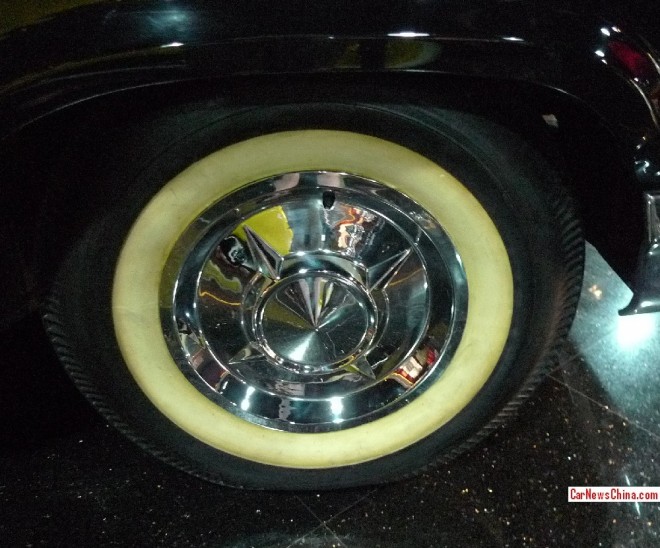 White rim and a rather scary wheel cover with four razor sharp arrows. 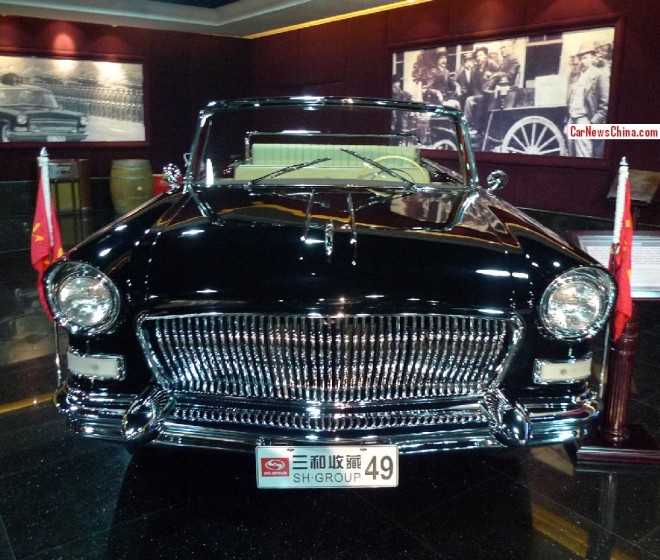 The giant and hugely impressive grille was designed to look like a rather innocuous Chinese hand fan. 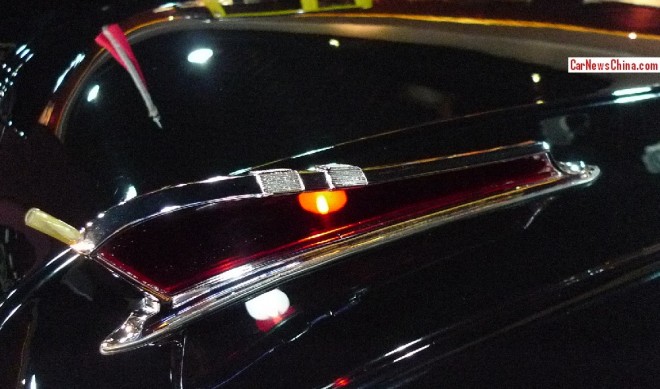 The red flag ornament on the hood. Made of red glass and metal. On later Hongqi’s the ornament was made of plastic. 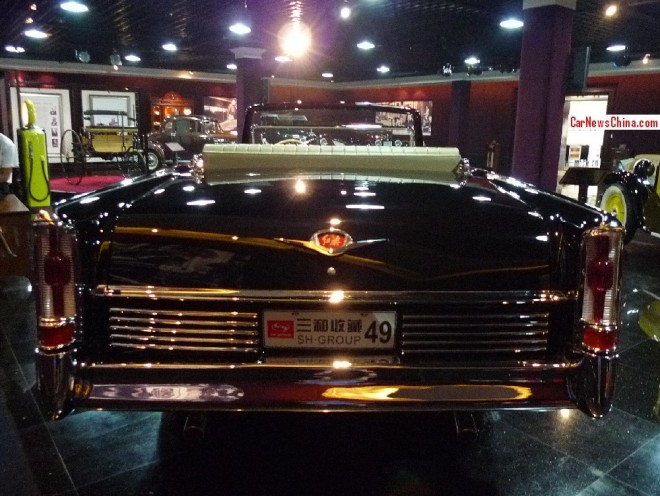 Chrome alone must have weighed over 500kg! Exhaust pipes chromed as well. Rear deck as big as a boat. Enough space down there for a lot of empty talks about politics. 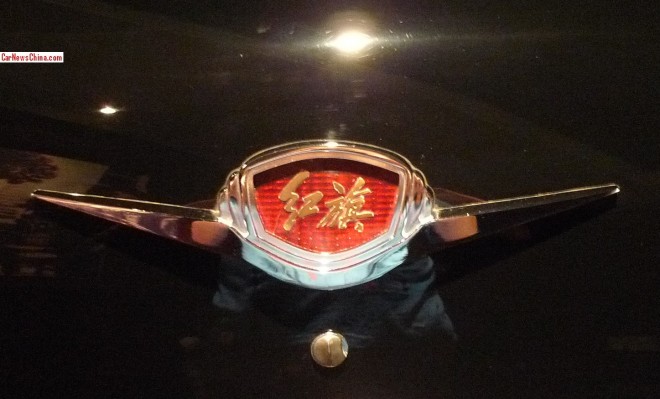 The badge on the back, with the Hongqi name written in Mao’s handwriting.

A perfect car perfectly restored and cared for with many love. May this giant Hongqi CA72 Parade Car stay safe forever!