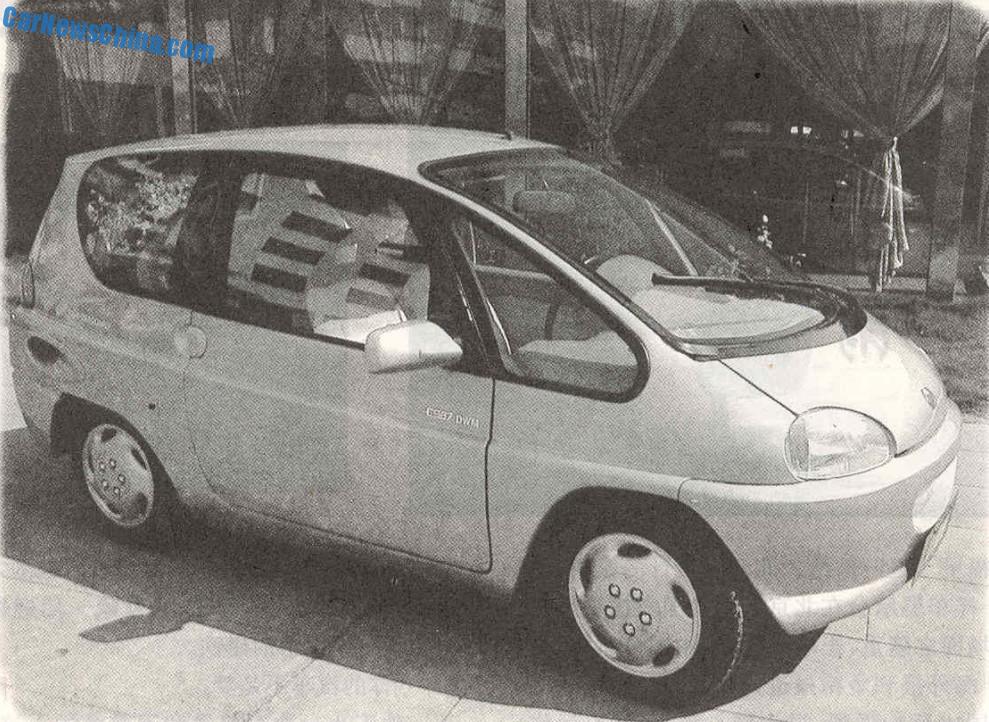 Today in China Car History a very special car. This is the Tint Dragonfly Lucky Star C987 mini car concept, born in 1993. It was designed by a certain Mr. Tak Lee from Hong Kong, who studied at the Central School of Design and Art in the United Kingdom. The idea was to build a affordable car for the Chinese masses. 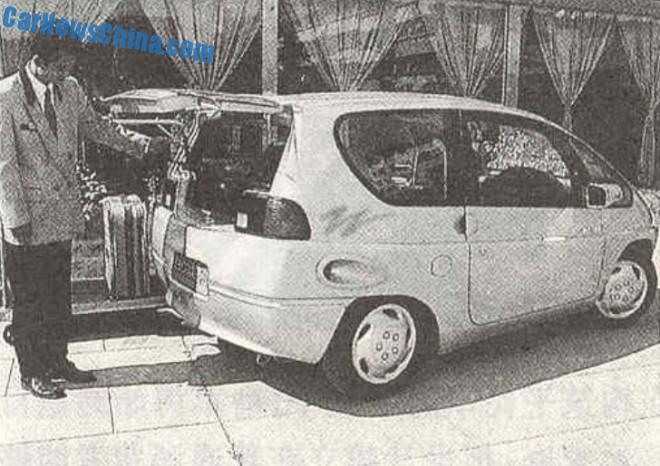 Mr. Tak had a company called Tint Hong Kong. To get his dream into production he went to Shenzhen in Guangdong Province, just over the border, where he agreed a deal with a state-owned company called Shenzhen Dragonfly Industrial Corporation, and so Tint Dragonfly was born.

The Lucky Star C987 concept was based on the platform of the second generation Suzuki Alto that was manufactured in China by the Changan-Suzuki joint venture. Mr. Tak Lee however moved the 0.8 three-cylinder engine to the back, making for a streamlined cab-forward MPV design that could seat four people.

Mr. Tak also envisioned a more conventional four-door hatchback and a four-door sedan, with the engine up front, and both based again on the Suzuki Alto.

In 1994 Tint Dragonfly took the Lucky Star C987 concept and all their ideas to the Wuxian Trade Exhibition in Shanghai. Their aim was to attract potential investors, dealers, and customers. And attention they got, from none other than Norinco, also known as China North Industries, the largest weapon manufacturer in China.

At the time Norinco was diversifying into other businesses, including trucks and passenger cars. Sales however were not very impressive. Norinco considered the Lucky Star as a fresh design and idea, perfect for kick starting their passenger car plans. 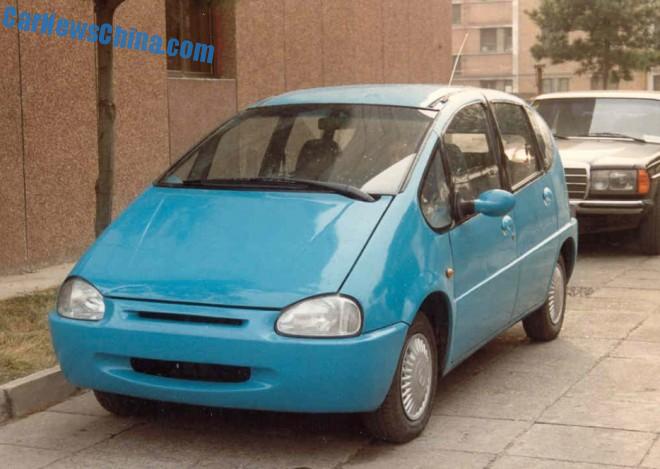 Tint Dragonfly and Norinco agreed to a new joint venture to get the Lucky Star into production. Norinco thought the 3-d00r hatch a bit too modern and parties decided to go for the four-door hatchback with the engine up front. Development started in earnest and a first prototype, this very blue car, debuted on the 1996 Beijing Auto Show. Platform was again Suzuki Alto and engine the 0.8 Suzuki three-cylinder. 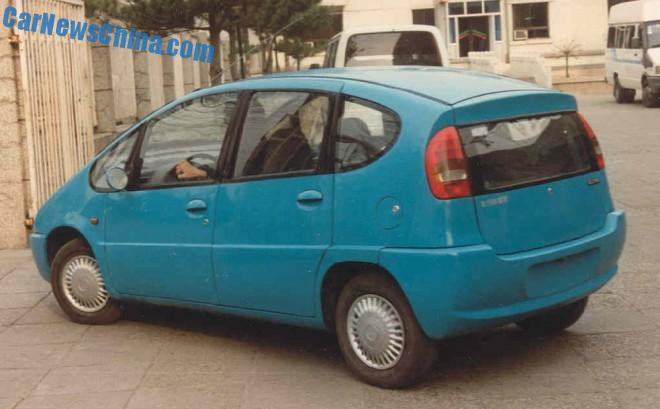 The vehicle was renamed Beifang QJC7085 Lucky Star. Beifang is the Chinese name of Norinco. In English marketing material they used the name ‘Peifan’. The Norinco name was never used, likely to prevent unhappy associations with the murky Chinese weapon business. This white car was the second prototype, seen here with military license plates. 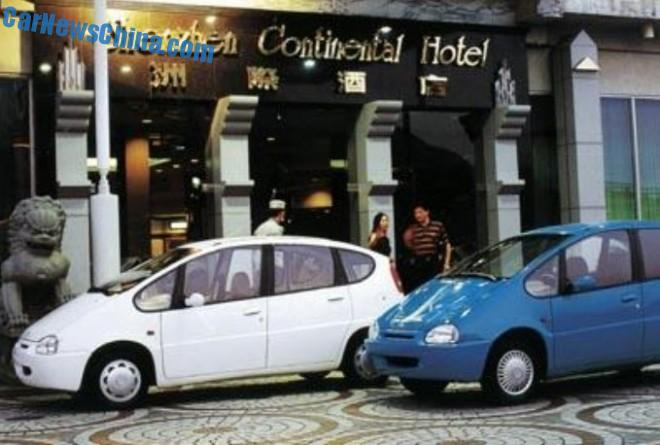 The two prototypes at the Shenzhen Continental Hotel.

It proved harder than expected to get the Beifan QJC7085 Lucky Star in production. The original idea was to make the Lucky Star somewhere down south in the Shenzhen area where labor was cheapest and Mr Tak Lee could keep an eye on things from nearby Hong Kong. 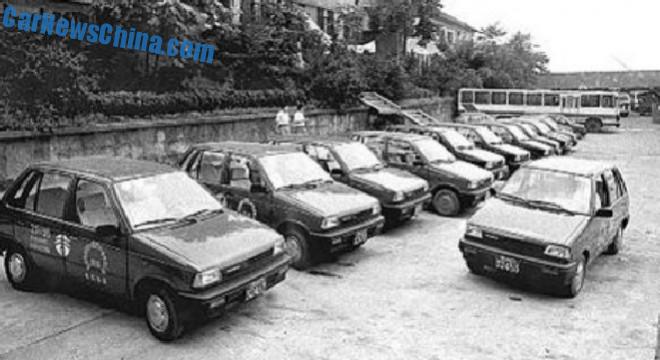 Norinco had other plans. The weapon maker already had its own car factory, the Qinchuan Machinery Works Automobile Sub-Factory in the great city of Xi’an in Shaanxi Province. The factory had manufactured the Beifang QJC7050 minicar in a very small production run in 1986 and 1987.

As luck would have it, in 1997 the factory was producing a licensed variant of none other than the… second generation Suzuki Alto. Suzuki licensed the Alto to several small Chinese automakers, earning money in addition to what they got from their official Chinese joint venture. On pic a batch of Qinchuan Alto taxi’s. 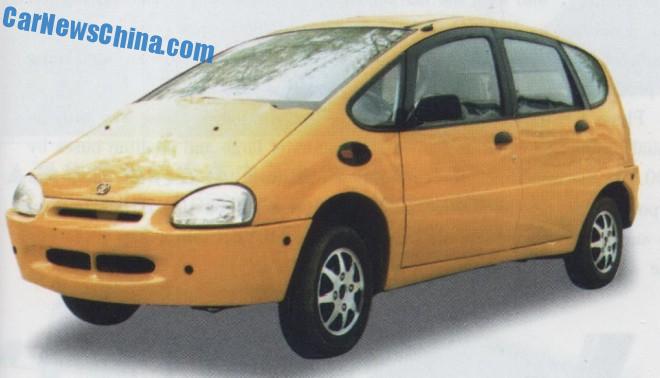 Work started on the development of the production car, which debuted in 1998 as the Qinchuan QJC7080 Lucky Star. It was basically the same as the prototypes, except for a slightly different bumper, different side indicators, different doorhandles and different mirrors. It was also slightly longer than the prototype, but wheelbase was the same. The final specs:

Sadly, the Qinchuan QJC7080 Lucky Star never made it to the market. Details are murky, but it appears that the vehicle did not receive approval for production from the central Chinese government. This is remarkable because Norinco is a mighty state owned company. But so it was, and mass production never started. How many pre-production cars were made is unsure, but surely no more than a hand full.

A tragic end for a great idea.

Norinco eventually got out of the car business altogether to focus on killing machines, the Qinchuan Machinery Works Automobile Sub-Factory was sold to BYD, Mr. Tak Lee continued his career as a successful independent designer, and the Tint Dragonfly joint venture was disbanded in 1999. So far all fine but the adventure ended rather badly for Shenzhen Dragonfly Industrial Corporation. The company was declared bankrupt in 1999 and its president Yu Junhai disappeared, he popped up ten years later in Shanghai and became a real-estate tycoon.

Photos from the great book “Made in China. Lost Small Cars of the 1990′s”. Additional information via Sina.com and CNfol.