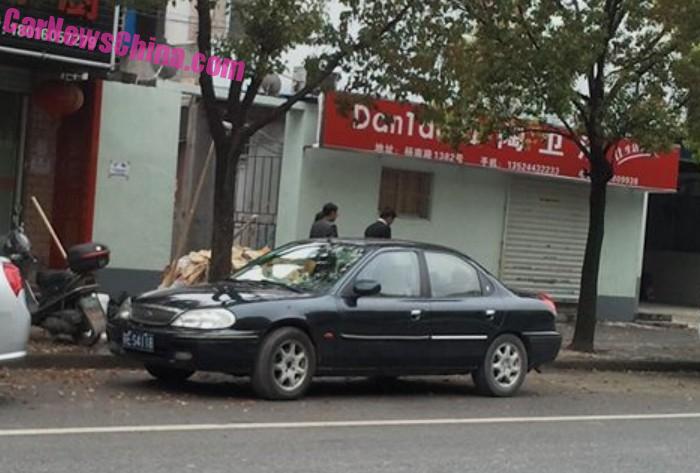 A black Ford Mondeo M2000 sedan, Spotted in China in the great city of Shanghai by Reader BYDfortheWin, thank you for the pictures! The Mondeo M2000 has a unique story. It is based on the first-generation-facelift (Mk II) Ford Mondeo sedan, and fitted with a shiny grille in style with the Mercury Mystique.

The Mondeo M2000 was manufactured in Taiwan by Ford Liou Ho Motor (wiki), a company that made, and still makes, Ford and Mazda branded cars for the Taiwanese and South East Asian markets.

The M2000 was their first and only export to China. It arrived here in early 2001 and remained on sale until 2003, when it was replaced by the China-made second generation Ford Mondeo, which was manufactured by the Changan-Ford joint venture which started operations in the same year. 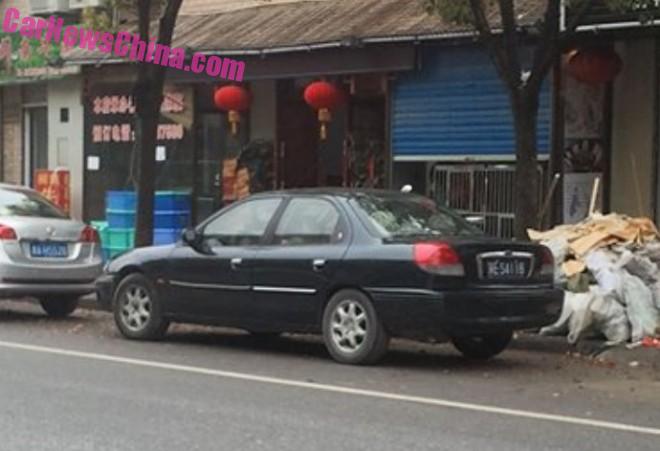 The Mondeo M2000 was only available in the absolute top spec Ghia-X trim, which came with a shipload of luxurious stuff. Power came from a 2.0 liter four-cylinder ‘CD4E’ 16V petrol engine with an output of 135hp, mated to a four-speed automatic gearbox. Power went safely to the wheels with ABS, TCS, and EBD! Size: 4620/1751/1424, and wheelbase is 2704. 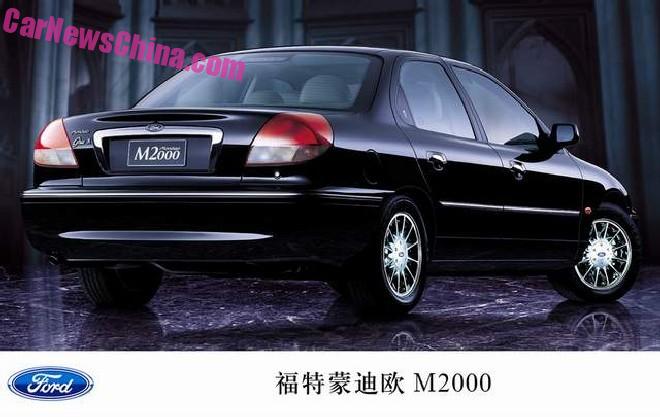 When new in 2001 price started at a hefty 308.000 yuan, making the M2000 expensive compared to locally made competitors such as the Volkswagen Passat and the Nissan Bluebird. Because of that Ford didn’t sell a lot of it, and these days they are a rare sight on the road. 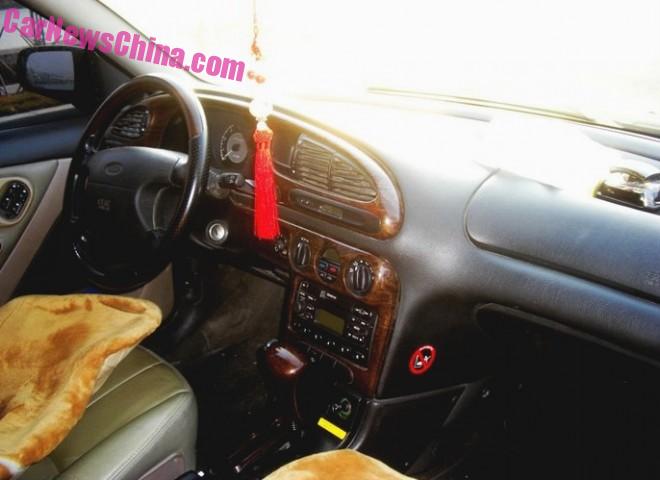 The interior came with leather seats and shiploads of plastic wood on the dashboard, and check out that giant gear knob! Plastic-wood trim was very common in the early ’00’s, it then disappeared for out of fashion, but happily returned about half a year ago, especially in cars made by the local Chinese brands. 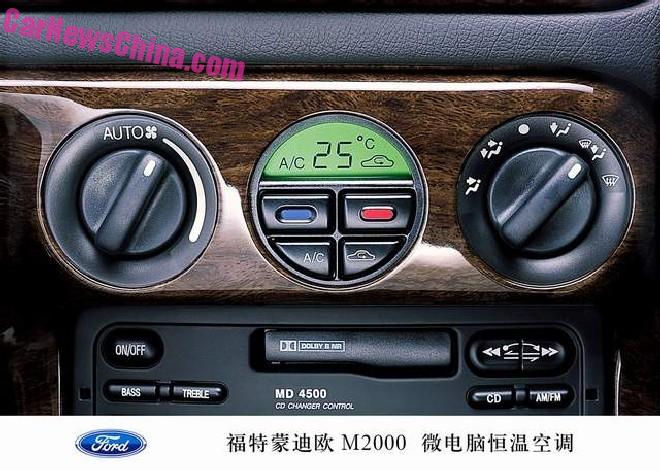 The aircon unit was controlled by a round panel with four buttons and a small display, looking very techy for its time. The M2000 was furthermore equipped with a cassette player and with a ‘MD 4500’  six-CD changer CD player, with the CD box located in the boot. The system played its heavenly music over a seven-speaker sound system. 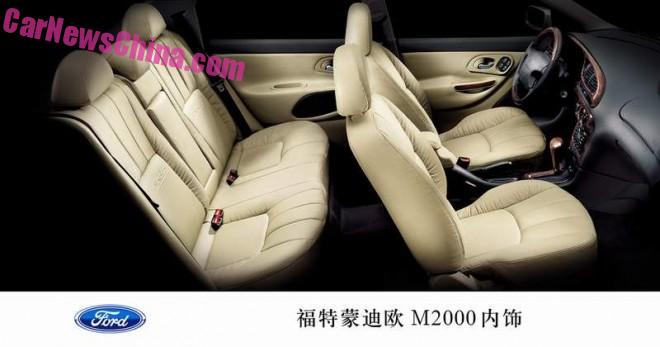 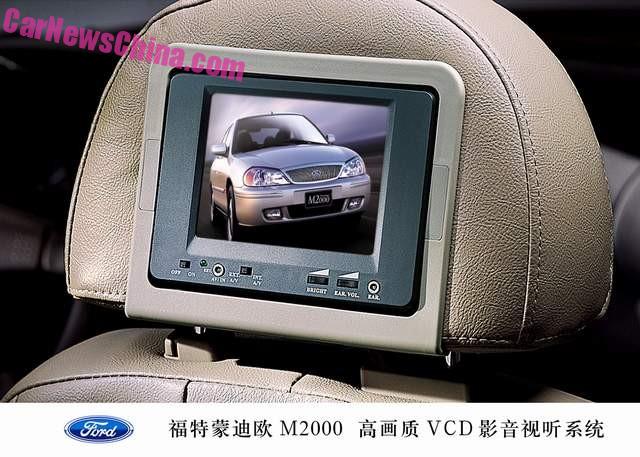 Best of all is the turbo trendy VCD (video CD) system for the passengers. VCD’s were turbo hot everywhere in Asia from the early 1990’s to the early 00’s, when they were slowly replaced by DVD’s. The M2000 has one player with two airplane-like screens, so passengers got to agree on what to see. 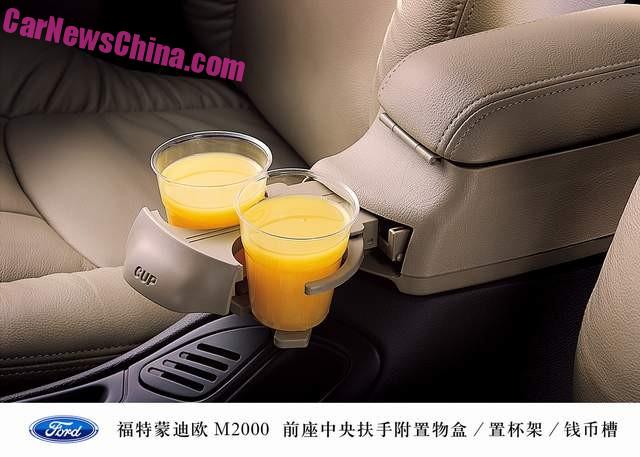 Driver and passenger can drink orange juice from a cup that they can put in the cup holder in the arm rest. Look, it says ‘cup’, no mistakes possible here. The cup holders were ”hydraulic retractable”. 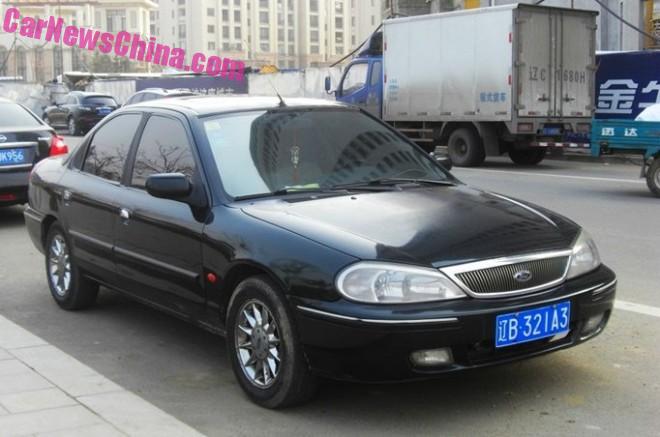 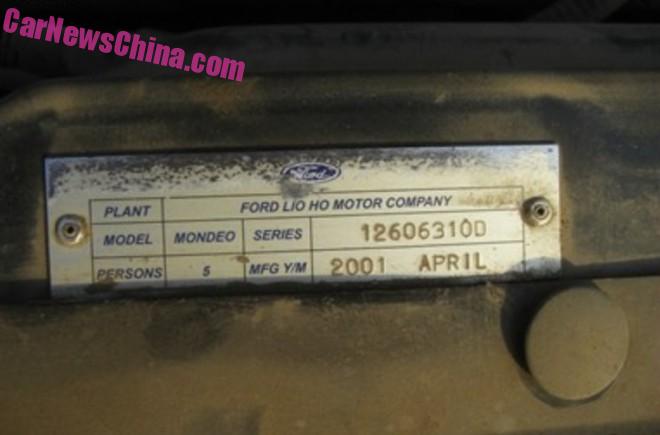 This one was made in April 2001, by the Ford Lio Ho Motor Company. Today Ford owns 70% of the business, and the Lio Ho family the rest. They company also owns several large Ford and Mazda dealers on Taiwan. 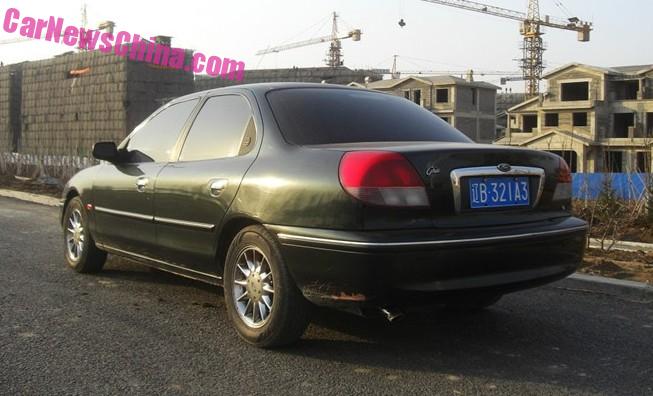 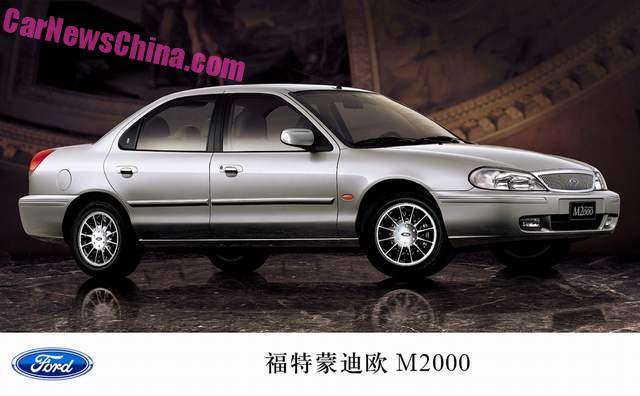