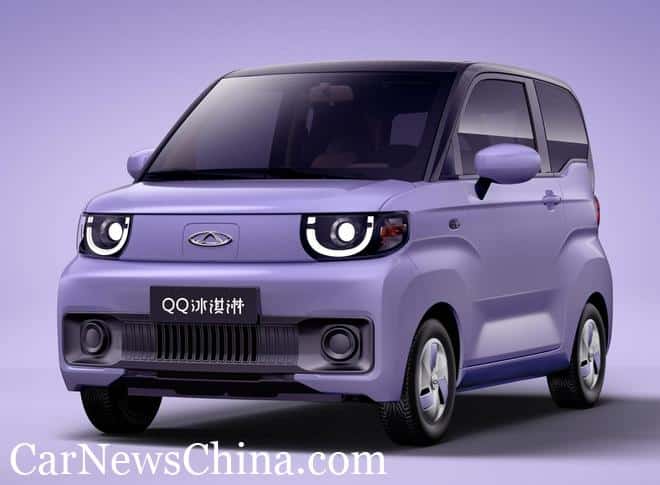 The new car adopts a closed front grille design that is common to new energy sources. The charging port is located behind the central LOGO. The headlights on both sides adopt a polygonal shape, and a U-shaped lamp cavity structure is added inside to make the new car light group present an excellent visual effect. At the same time, the through-type black air intake is used under the grille to increase the visual layering of the front face.

On the side of the body, the new car adopts a similar small square box shape as a whole. It will make it more convenient to park the car daily. At the same time, the new vehicle also adopts the trendy suspension roof design, which is more in line with the aesthetic needs of young people.

On the rear, it uses a polygonal taillight group, supplemented by U-shaped lamp cavity details. At the same time, the large embedded trapezoidal license plate area is painted in black, which echoes the car’s black roof and has a prominent sense of hierarchy. The size of the new car is 2980 x 1496 x 1637 mm in length, width, and height, and it has a wheelbase of 1960mm.

As for the interior, the overall design is based on a practical and straightforward style. But the contrasting color stitching design is adopted in many parts of the car. It looks more youthful and lively. It is also equipped with multi-function buttons. The seat is placed in an integrated design. The brand officially calls it the player gaming seat. It looks more sporty.

Chery QQ ice cream will feature drivers’ airbags, tire pressure alarms, and other configurations in terms of safety. The doors also use a W-shaped anti-collision steel beam design. It has a higher protective effect on the entire compartment. The door plate steel beam is rolled integrally. It also improves the strength of the whole vehicle. In addition, the front longitudinal beam of Chery QQ ice cream has an energy-absorbing box. The same can effectively divert the collision load. At the same time, the rigidity of the front sub-frame is improved, and the safety performance is further guaranteed.

In terms of power, the new Chery QQ Ice Cream will sport a TZ160XFDM13A drive motor produced by Anhui Ruilu Technology Co., Ltd.  The maximum power which the magnetic synchronous motor can have is 27Ps (20kW). At the same time, it can produce a peak torque of 85Nm, and the maximum speed will exceed 100km/h. It will feature 9.6kWh and 13.9kWh lithium-ion batteries for its two variants. According to NEDC, it will have two variants with a range of 120km and 170km. Chery will officially launch the upcoming car in November.