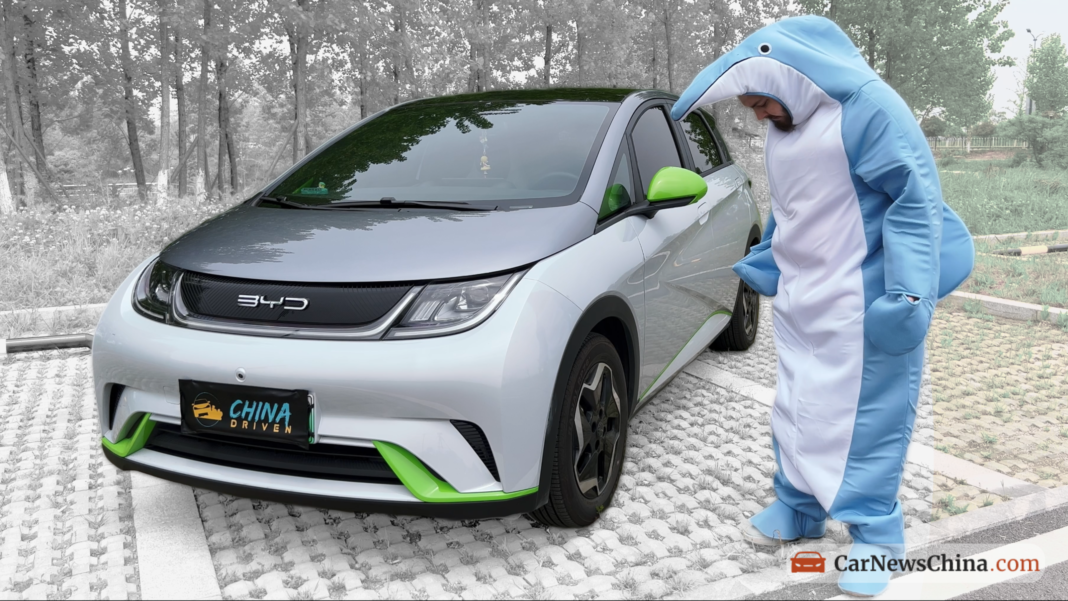 The BYD Dolphin is a subcompact EV Hatchback from BYD. All eyes are on this city EV as it is supposedly destined to be exported to Australia as the BYD Atto 2, following the BYD Yuan Plus (Atto 3).

The front overhang is extremely short without an engine, giving the Dolphin a squarish, squat look head-on. The curvature of the tiny bonnet slices the top of the automatic LED headlights giving it a tad more character, coupled with the DRL lights and central light bar. The company’s updated logo is nestled in the center in 3D lettering. The contrast of a grey bonnet and white bodywork spiced up with luminous green accents on the wing mirrors & lower front & rear bumpers gives a young, funky vibe.

Down the side, the grey bonnet color continues into the A-pillar and runs the length of the roof into the spoiler at the rear, giving the appearance of a lower roofline. The C-pillar contains a crosshatch-like effect, echoed from the front grille. At the back, the standout design cue is the ”Chinese knot” style LED taillights, a natural design feature, with the “Build your Dreams” logo centered in the taillight cluster. All of this rides on 16-inch two-tone aero style alloys. Dolphin is a funky, youthful city EV hatchback.

Style-wise, a lot is going on inside the BYD Dolphin’s cockpit. As an entry-level EV, the hard plastics that dominate the interior are expected. They are, however, seemingly well put together, with no rattles in the car we drove. Below the rotating 12.8inch central touchscreen, there is a soft touch faux snakeskin section that stretches the whole dash, with a rubberized floating shelf in the middle which houses the gear selector & control buttons. All of the buttons are rocker switches to toggle on and off different functions.

The one-piece front seats are comfortable with decent side bolstering and can be positioned low for a better driving position. The driver’s seat is 6-way electronically adjustable, with the passenger seat being 4-way manually adjustable. No memory function on this trim. All seats are again imitation leather, with the same green accent color found on the car’s exterior.

The rear is a somewhat stark affair, as to be expected in this segment and price point. A single central cup holder & a single USB outlet are provided for rear passengers. However, the legroom is more than ample, surprisingly spacious for a subcompact. A familiar theme amongst small Chinese EVs, no doubt a result of EV packaging & Chinese buyers’ focus on rear passenger space. Although the wheelbase for a subcompact is generous, headroom in the back will still be a problem for 5’10” and over.

Behind the faux leather multifunction steering wheel, you’ll find a 5inch color instrument panel. At the same time, it is bright & easy to see; there’s a lot of information shoved into tiny screen real estate, which is a bit overwhelming at first. The buttons inside the BYD dolphin are hard plastic, silver-colored units, which feel like they’d be more at home in a 2008 Ford Focus.

BYD’s party trick is its 12.8inch rotating central touchscreen. However, I don’t think it’s more than a gimmick since most functions make more sense in landscape than portrait mode. The UX itself is not the slickest, and it gets the job done with a few nice touches. But generally, the graphics look a bit naff & the resolution of the homepages looks low, although movie quality seems fine.

After the two “homepages,” the screen lists apps as you’d find on an iPad, which are not the easiest to scroll through while driving quickly. However, there are two standout features. Firstly when navigating away from the active Sat Nav page to another app, a small movable translucent overlay will appear, giving basic nav info on the screen. The second is on the user page, where you can set your home electric tariff, and the car will tell you how much the trip cost you based on your electricity price per kW & kW used on that trip.

All models come with cruise control. The top model, destined for export to Australia, gets Adaptive cruise control. There’s no Level 2 ADAS here, no Lane Keep Assist or NOA. It does have a lane departure warning, though. It comes with a 360 panoramic camera on most models, and all models get rear parking sensors. However, front parking sensors are not available on any models.

There are two power levels in the BYD Dolphin. The base & middle trims get a modest 95HP & 180nm. Honestly, the acceleration is a lazy affair hitting 100kph from a standstill in 10.5s for the base, with the middle trims even slower at 10.9s, chiefly because of the larger battery. The top model has a peppy 177hp & 290nm, but still, it’s not a stoplight drag star with a mediocre 7.5s.

I drove the middle trim, and driving-wise, it was as expected. The large side-wall tires smoothed out road imperfections while doing nothing for a turn-in feel. The suspension is super soft, meaning a lot of wallowing if you try to take a corner at a reasonable pace. I even hit the bump stops going over a mini speed bump a bit too quickly. But all of these things do help to provide a relaxing, comfortable journey as you battle through city traffic. After all, a cramped urban environment is probably where this belongs, and it does business there. I suspect the top trim with more power and lower profiled tires might return more engagement if that’s what you’re after. But don’t expect miracles. Personally, I’d be looking elsewhere for more driving engagement, probably at the Ora Cat GT.

This is an entry-level EV, and you’re looking at the bottom end here. There’s no level 2 ADAS, lots of hard plastics. And the performance will probably leave your grandma asking for more. But at this price, the quality seems reasonable. Expectations have to be reined in at this price point. Hard plastics are expected, but they are fitted well with vibrant styling, which may or may not be to your taste. Tech at this low price sees a heat pump & BYD Blade batteries. BYD touts the Blade batteries as highly safe with no thermal runaway being pieced. The owner of this vehicle echoed the Blade batteries’ reputation for safety as a standout reason for buying it.

Looking objectively, it’s a great package at a compelling price point. A cheap city EV that is comfortable with plenty of rear space for a subcompact car. But the ORA Cat for a bit more money is even better.