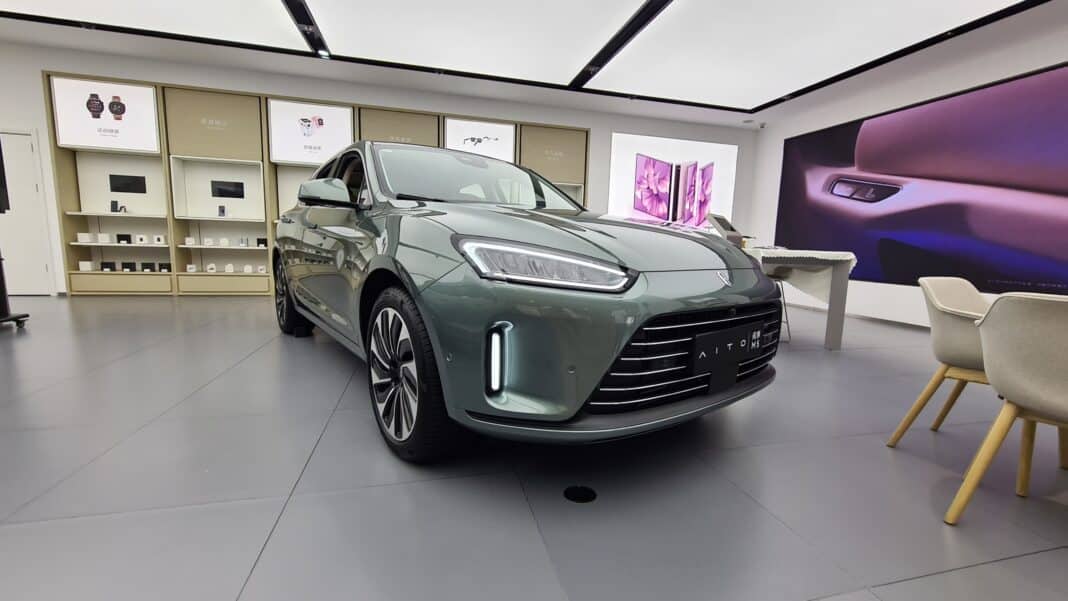 Huawei, one of China’s largest tech companies and best known for their cellphones and 5G networks, has built a car. Well, kind of. Meet the AITO M5.

AITO, which stands for Adding Intelligence To Auto, is the brainchild of Huawei and Chongqing-based car maker Seres, and the M5 is the first model from this new brand.

An extended range electric vehicle (EREV), the AITO M5 has all the potential but does it deliver where it counts?

We got behind the wheel to put the car through its paces, so read on for the full review, or check out the video below.

A five-seat SUV, sharing the exact same 4,770mm length of the Mercedes-Benz EQC, the M5 is entering a crowded market.

However, as an EREV, it offers a proposition no other similar sized electrified cars can, that being the promise of over 1100km of range.

EREVs combine a combustion engine with a battery and motors, with the engine only there to charge the battery and generate electricity for the motors.

That means you get the near silent EV driving experience with linear power delivery and instant torque, but with the comfort of knowing fuel or electricity stations can get you home.

A Wolf in Sheep’s Clothing

To look at the M5 from the outside you’d be hard pressed to anticipate its performance credentials. The generally rounded shape and simple styling, particularly in the side and rear profiles, have a jelly mould feel to them with sharp details kept to a minimum.

Perhaps the biggest suggestion of the M5’s hidden power comes from the giant front grille which dominates the face, a feature that looks likely to become the family look if the new M7 is anything to go by.

In side profile, resemblance to the Porsche Macan is unmistakable, but other details are scarce. Aerodynamic retracting handles and large ‘Aero’ alloys are the only real features.

Things get slightly more exciting at the rear where a full-width LED lightbar curls back under itself on a glass black plastic panel, but the large plastic ‘diffuser’ panel at the bottom feels like an afterthought.

Inside the M5, the commitment to simplicity continues with a single 15.6-inch screen in the centre and a lot of horizontal lines.

However it does feel very premium with Nappa leather used unsparingly on almost every surface. Even the door pockets and lower parts of the centre console get the treatment with cheap plastics very hard to find.

Real wood inlays also feature on the doors, dash, and on the rear of the large and comfortable front seats.

With a 200kW (272hp) motor on the rear axle on base versions, the M5 already has more than enough power for most, but with the dual motor versions can turn the M5 into a monster.

Officially capable of dispatching the 0-100km/h sprint in just 4.4 seconds, the M5 is blisteringly quick in a straight line and pins you to your seat. For many, having that kind of power on tap for quick overtakes will be enough.

In fact the boss of Huawei, Ren Zhengfei, reportedly asked that the M5 be comparable to a Porsche Macan GTS.

But while the M5 is on a par with the GTS in terms of speed, it can’t claim to offer quite the same levels of dynamism.

Light steering and fairly soft suspension mean that the M5 is never going to challenge a Macan GTS dynamically. Our test found that heavy acceleration with steering input made the back corner of the M5 sink quite strongly.

However, the reality is that most Chinese consumers will not be expecting GTS handling and feel, nor will they get much chance to use it. In fact the variation in the ‘comfort’ and ‘sport’ steering models is barely perceptible.

Comfort remains a priority for the average consumer and the M5 delivers successfully on that front, soaking up most poor road surfaces without a fuss.

For a reasonable price, the AITO M5 can claim to be very well equipped with some valuable tech on board.

Key amongst them is the super fast wireless charging pad on the centre console which charges at 40W, more than double the speed of standard wireless chargers.

Mercifully, it’s also angled toward the driver which makes it easily accessible when absolutely needed.

When 40W charging isn’t fast enough, there are also a couple of 66W super fast USB-C ports to complete the job faster.

It’s a quality system with a variety of options to adjust the sound to your liking and position in the car, giving a cinematic experience.

Four of those 19 speakers are in the driver’s headrest, where the system is able to deliver system notifications and sat nav instructions directly to the driver without disturbing others in the car.

A heads-up display ahead of the driver also features keeping essential information in the driver’s eyeline.

On the comfort side, all outer occupants will feel right at home with comfortable seats, and with decent side bolsters in the front row.

Front seats come with the full selection of heating, ventilation, and massage functions, while the outer rear seats get heating but no buttons in the rear to activate it.

This must instead be operated via the digital screen or using Huawei’s voice system which knows which occupant is speaking.

Vents in the front are sadly without physical controls meaning a Tesla-style operation using the climate menu on the screen.

Overhead, the M5 boasts a large panoramic roof which lets plenty of light into the cabin, while the front and rear windows are double glazed for better sound insulation.

It is also capable of vehicle-to-load (V2L) capability with a 220V socket in the trunk making camping trips that bit easier.

The trunk itself can accommodate 369-litres with seats up or 776 with seats folded down.

The AITO M5 has a 1.5-litre, 4-cylinder turbocharged engine up front running on the miller cycle which means it stays in peak torque range for longer, but as stated, this doesn’t power the wheels.

Power instead comes from either one or two motors, with base models using a 200kW (272hp) motor producing 360Nm of torque motor on the rear axle.

Somewhat confusingly, the Performance edition keeps the 165kW motor on the front but tunes the rear motor down to 150kW, meaning 315kW (422hp) in total, but with torque turned up to 720Nm.

All models make use of a 40kWh ternary lithium battery pack, delivering between 150 and 200km of electric-only range depending on the model, and over 1100km when combined with the engine on the WLTC cycle.

Sales of the AITO M5 have recently started to pick up and that’s not without good reason. While it isn’t the most exciting car to look at, it’s very reasonably priced and generously equipped.

With lightning acceleration it also has adrenaline-inducing performance, if not quite the chassis feel to match, but that won’t bother most consumers here.

The feather in the cap is the EREV range. Eradicating range anxiety in this manner has worked out incredibly well for the Li Auto ONE and should bode well for the M5 too.

Throw in a slick operating system and some tech smarts and you get a car that will appeal to many.

The question now is, will the recently launched M7 offering six seats and the so-called ‘zero-gravity’ chair complement or steal sales?