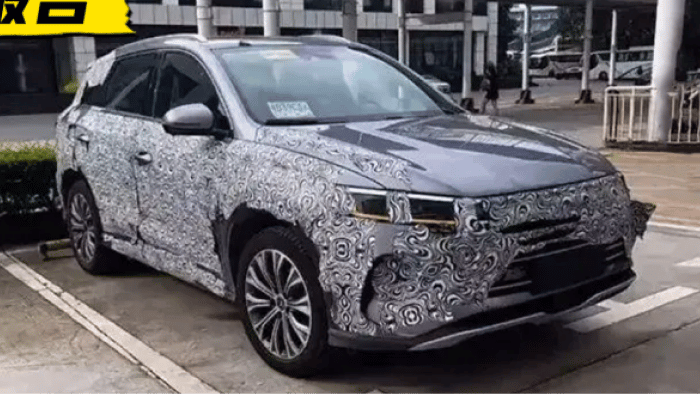 The BYD Corvette (Frigate) 05 was spied in China. It will become a third vehicle in BYD’s Warship series that comprises PHEVs aimed at young customers. The Corvette 05 has a lot of similarities with the BYD Song Pro, including a giant rotatable screen. Let’s get to know the Corvette 05 better.

First, let’s talk about the Corvette 05’s name. Its Chinese name is 护卫舰 05 (Huweijian 05), and it could be translated as ‘Corvette 05’ or ‘Frigate 05’. Since BYD hasn’t shared its international name, we will stick to the Corvette name. As mentioned, the Corvette 05 will become a part of a Warship series which consists of PHEVs. At the moment, BYD has launched only one Warship vehicle called ‘Destroyer 05’. It also prepares to launch the Corvette 07 SUV. And now information about the Corvette 05 has emerged online.

Despite the camouflage cover, we can see that the general shape of the Corvette 05 looks close to the BYD Song Pro. They have a similar slope roofline, low bonnet, and proportions. We will remind you that the Song Pro is a D-SUV with dimensions of 4650/1860/1700 mm and a wheelbase of 2712 mm. It seems like the Corvette 05’s size will also stay in line with the Song Pro. Other exterior details of the Corvette 05 include a large sunroof, a sporty rear spoiler, blocky headlights, a single taillight unit, and a frameless grille.

Worth mentioning that some enthusiasts have made fan images of the new SUV. It has a lot in common with the Destroyer 05.

The interior of the Corvette 05 also stays in line with the BYD Song Pro. We can see the same door panels, a center console, a center tunnel, a steering wheel, etc. The most exciting similarity between them is the large floating rotatable screen. Its diameter is 15.6 inches. This monitor is widely used in plenty of BYD vehicles, including the Seal and the Destroyer 05.

As for the differences between the BYD Corvette 05 and the Song Pro, there are few of them. We can highlight a unique color scheme with white, blue and black colors. And another Corvette’s difference is the round air vents.

Chinese media speculate that the Corvette 05 will adopt the DM-i system of the Song Pro. It comprises a 1.5-liter naturally aspirated petrol powered four-cylinder for 110 hp (81 kW) and 135 Nm. It works in pair with an electric motor for 180 hp (132 kW) and 316 Nm. The Song Pro has two optional batteries. The entry-level got an 8.3-kWh LFP battery. It can run up to 51 km with an ICE off. The second battery is also LFP with a capacity of 18.3 kWh. With it on board, the Song Pro’s fully electric NEDC range is 110 km. So the Corvette 05 won’t have a lot of power, but it will be a reasonable family vehicle.

The BYD Corvette 05 will debut this year. Right now it seems too similar to the Song Pro. Anyway, we will keep an eye on it, so stay tuned.