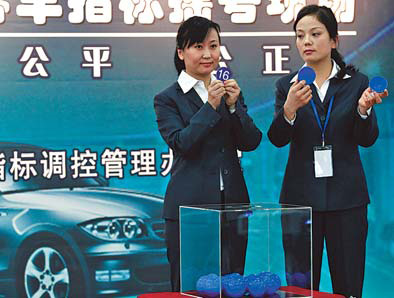 The capital’s first car license plate lottery took place on Wednesday under new rules to tackle chronic traffic gridlock and air pollution. The lottery gave the green light to 17,600 people, out of 187,420 qualified applicants, almost one in 11, to hit Beijing’s busy roads.

The lottery – broadcast live on television and the Internet – started at 10 am at the Beijing municipal transport commission. The 20-minute event was supervised by representatives of the applicants, statisticians and transport officials to “ensure openness, fairness and equity”, said Zhou Zhengyu, deputy secretary-general of the Beijing municipal government.

During the process, six supervisors randomly drew six numbers, known as seed numbers, which were then put into a pre-designed computer program to produce 17,600 codes, representing the successful applicants.

But transport officials did not make public details of how the pivotal computer program works.

Applicants can check the results online 25 minutes after the lottery or by phone one hour later. Failed applicants qualify automatically for the next monthly draw. Responding to public concern that ever-increasing applicants reduce the chances of winning, Zhou said the government is considering granting quotas, in a year or two, to those who need vehicles but fail to get plates through the lottery.

Winning applicant, Hao Yong, a 32-year-old resident who works at a consulting company, said he was excited after his number came up and he hopes to buy a car immediately. “I feel I’m quite lucky,” he told China Daily. “I think the lottery is fair because we, the common people, have a chance to win. Eight friends of mine were also lucky,” he said.

The Beijing municipal authorities announced on Dec 23 that any car sold after that date would not be granted a license plate until Jan 1, when buyers could apply for registration. During the buying frenzy that day, many car dealers sold out.

Another successful applicant, Chen Shi, who works at a public relations company, said he originally hoped to buy a car within a year or two but now he will hasten his plans.

“More than 50,000 people had applied to join the lottery before I even submitted the application, so I thought I would have to wait for at least several months before I got lucky,” he said.

“I decided to buy a car after the Spring Festival, as I do not want to waste the chance of registration,” he said. The new rules stipulate an applicant’s registration right expires if not used within six months. The new rules will allow only 240,000 new cars to be registered in Beijing this year, compared with the record 800,000 automobiles that took to the congested streets last year.

The number of registered cars in Beijing stood at 4.8 million at the end of 2010, as an average of more than 2,000 new cars hit the capital’s streets every day last year. But the current congestion is already so severe that parts of the city often resemble parking lots at peak hours.

The municipal government has also introduced higher parking fees in downtown areas and stricter enforcement of traffic rules. City authorities have also vowed to freeze the number of cars owned by government organizations. The city’s new traffic measures stipulate a driver may only register one car. Individuals can apply once a month.