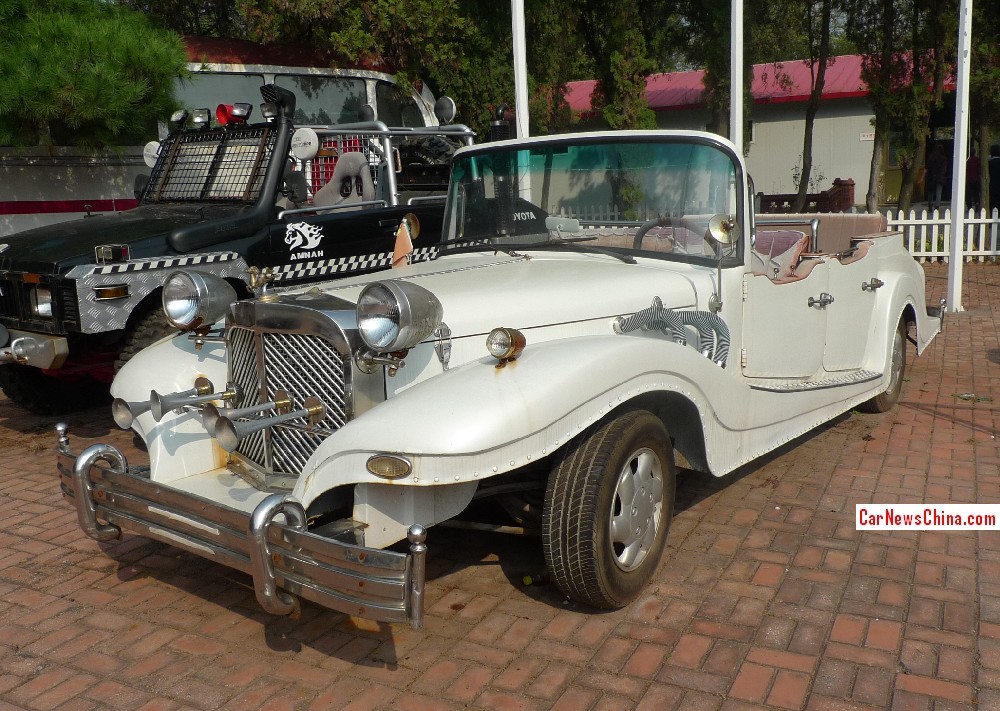 In those days there weren’t many fancy cars in China but there was, as always, a great need to impress the guests on wedding parties. The happy couple could then hire a so called ‘classic wedding car’, a China-made automobile that was supposed to look like a vintage Western limousine.  Some 20 small Chinese companies manufactured the classic wedding cars and Jinma was the largest of the lot. 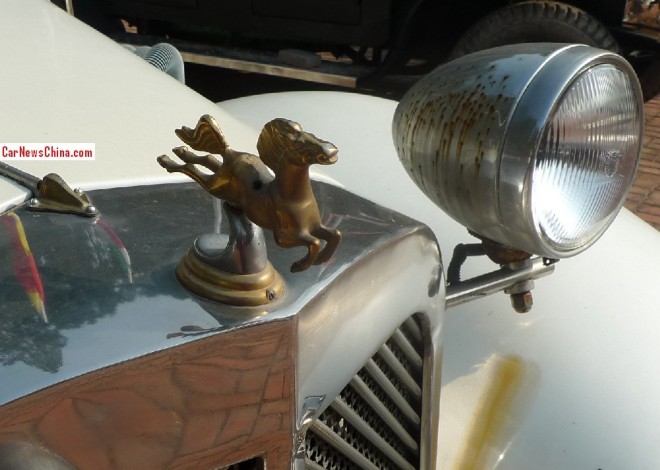 Jinma means ‘Golden Horse’ and this particular car has a beautifully crafted horse ornament on the hood. Rather rare, because most Jinma wedding cars came with fake Rolls-Royce or Mercedes-Benz ornaments. The body of the wedding cars was completely made by hand. The early cars were made of wood, later cars were made of wood and plastic, and later cars again were completely plastic. This particular car was a mid-time mix with the passenger bay made out of wood and the rest of the car out of plastic. 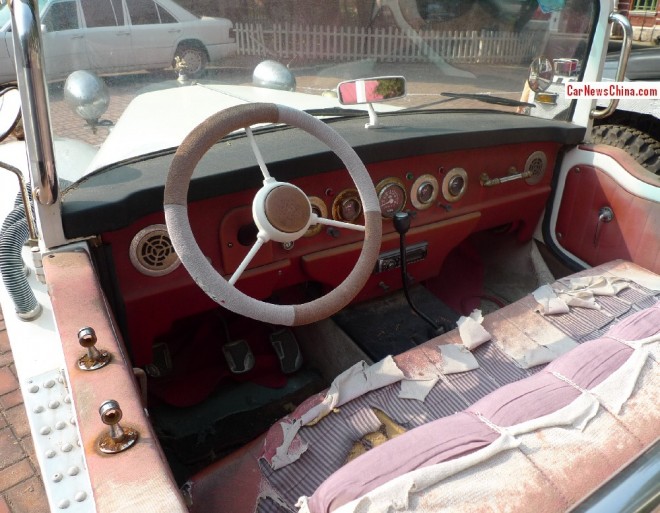 The Jinma Motor Company was a subsidiary of Qingdao Soar Automobile, based in the great city of Qingdao in Shandong Province. The company still exist today, making giant copies of the 1961 Rolls-Royce Phantom. Sadly, business isn’t as good as it was in the 1980’s as many Chinese can nowadays afford to rent the real thing.

The Jinma QJM5022TYN6 Wedding Car was based on the platform of a Great Wall Motors pickup truck, and the 2.4 liter petrol engine was sourced at Great Wall as well. The engine was originally developed by Mitsubishi and had an output of 100hp, which was enough to propel the QJM5022TYN6 to a top speed of 90km/h. Fuel consumption was hefty 8.5 liters per 100 kilometers. Curb weight was 1540kg. 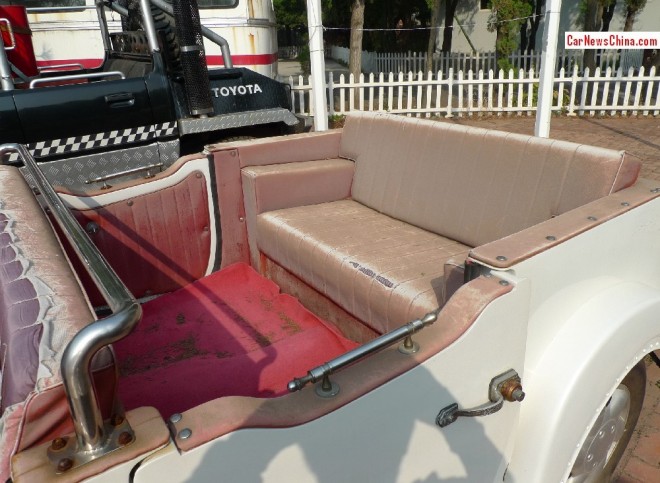 Pickup bed still recognizable here. The married couple would stand behind the front bench, waving to the crowds with one hand and holding the chromed handle bar with the other. Note wooden door and plastic wheel arch. Wheel covers really cheapo on this white Jinma, most wedding cars came with shinier examples. 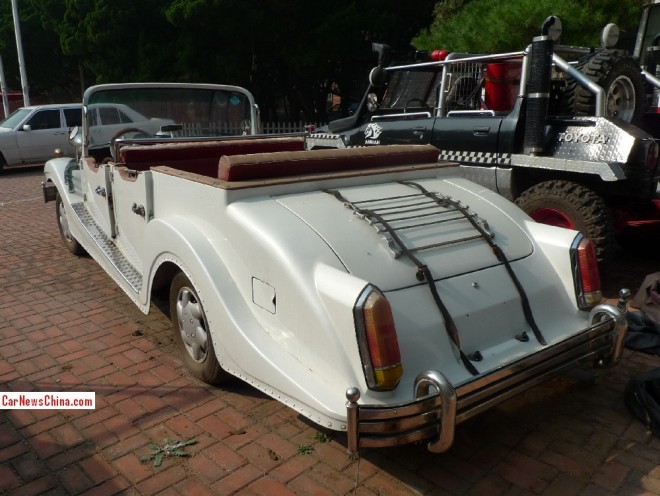 The rear lights are very interesting because they look exactly like the rear lights of the Hongqi CA770 state limousine. It seems most likely that Jinma used Hongqi as an example, but it is also possible that Jinma bought the lights from the same supplier as Hongqi did. This was, and still is, very normal in China… 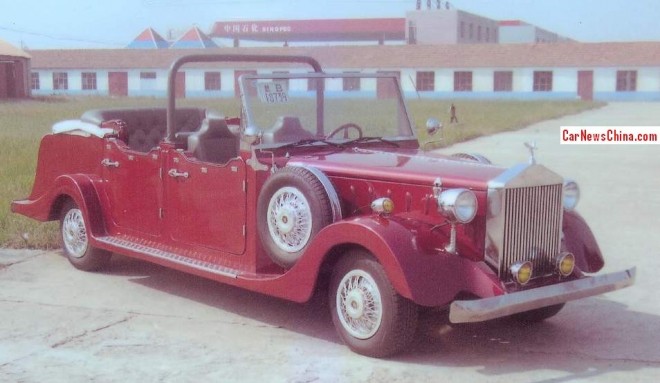 A red example with a Rolls-Royce grille and a giant handle bar. 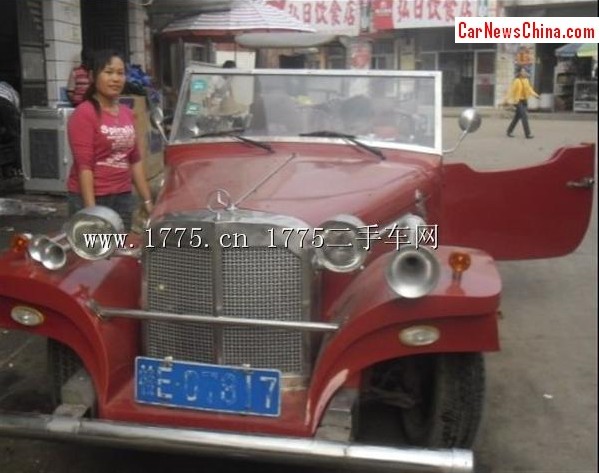 This is truly a special variant. In red with a Mercedes-Benz grille, and…

… it is a short-wheelbase roadster version! No idea how many Jinma made of those. This particular car was manufactured in 1998 and was offered for second hand sale in 2011 for 68.000 yuan or 11.200 USD. Cheap plastic wheel covers again, but otherwise very special. 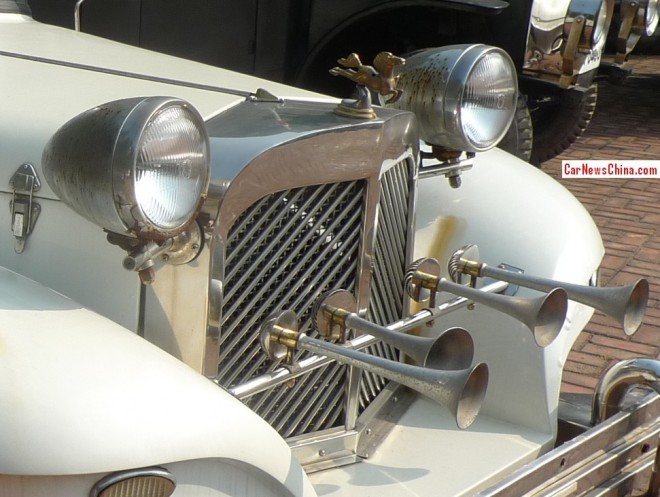 The four horns blow for the end of this story.