Nissan on the rebound in China 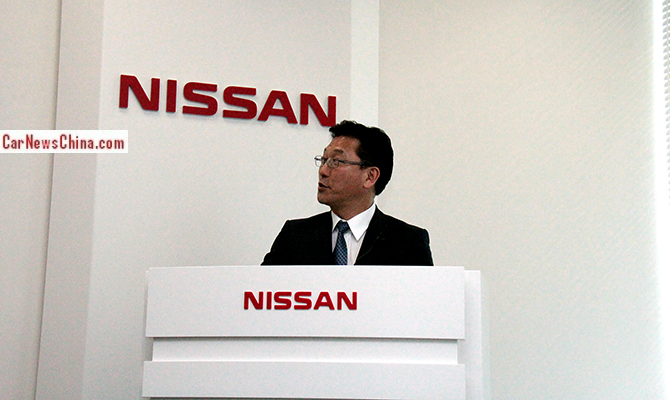 Japanese-branded cars led the market a few years ago. First they were dethroned by the Germans, then they went into a dangerous spiral as collateral damage from the island troubles. Last year, the Nipponese slowly clawed back their sales. After keeping a low profile for a while, Japanese automakers announced aggressive plans to retake lost market share. Today, Nissan’s head of its operations in China, President of Dongfeng Motor Co., Ltd. Jun Seki came to Yokohama to explain his plans to the Japanese media and CarNewsChina.com.

With 1,266 million units sold in the last fiscal, China is the second largest country market in Nissan’s universe, ranging only 19,000 units behind the U.S. This year, China is poised to become Nissan’s largest market with projected sales in the vicinity of 1.43 million units.

Nissan was one of the last major automakers to enter the Chinese market. The company came to China in 2003 with the Sunny. Together with its joint venture partner, government-controlled Dongfeng, Nissan focused on smaller car segments that at the time had been mostly ignored by other makers. Its Tiida sedan and hatchback, introduced in 2005, was a big hit with Japanese customers just as the Chinese market started to pick up steam, and Nissan quickly became the leading Japanese automaker in China.

In late 2012, Nissan became the rather innocent victim of a nationwide furor over the Diaoyu a.k.a. Senkaku Islands, which sunk sales of all Japanese automakers, despite the fact that their 50 percent partners are all government-controlled companies. Contrary to previous flare-ups over the same issue, which were more for foreign consumption and never quite registered with the population, this time the matter took a bit longer to rectify. By the end of 2013, Nissan’s sales again were at pre-crisis levels. Nevertheless, the dispute did cost Nissan and its Japanese peers two years of growth. 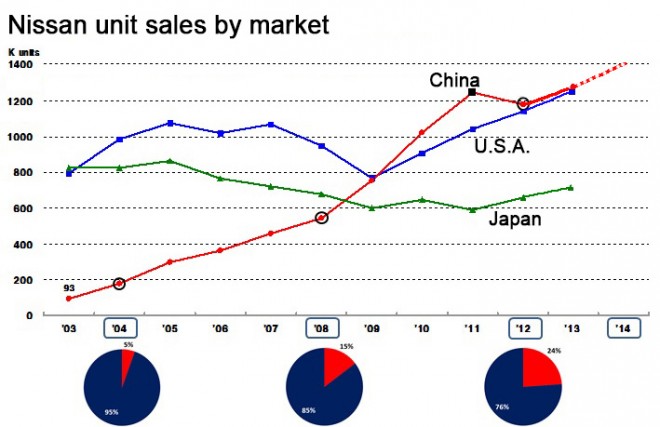 The island troubles did not dissuade Nissan from its aggressive expansion plans in China. This year, two new plants will come on line. The Dalian plant with a capacity of up to 150,000 units will make Nissan passenger vehicles. A new plant inland in Xianyang will make the Infinity Q50 and QX50, both in the long wheelbase variant so important for China. If sales in China expand at the current pace, Nissan may have to build new factories soon. At last year’s Tokyo Motor Show, Nissan CEO Carlos Ghosn said that “we might get into capacity problems if the Chinese market works out alright.” 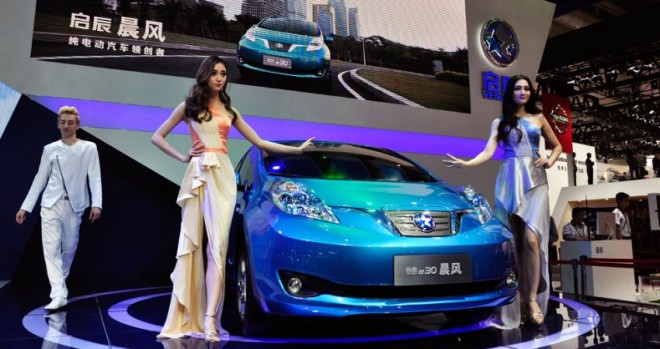 This year in September, Nissan will launch its all-electric Leaf onto the Chinese market, not as a Leaf but as the e30 of the Venucia brand. A few years ago, the Chinese government strongly hinted to all joint ventures to start a “Chinese” brand, and Venucia is Nissan’s supposedly indigenous variant. It was an even stronger governmental recommendation to put electric vehicles under a domestic brand, which made Nissan forsake the band power of the Leaf in China.

Also in 2012, the Chinese government blatantly copied the Obama administration’s blue sky EV targets, aiming for 5 million EVs sold cumulatively by 2020. “Well, they revised that down to 4 million,” chuckled Seki today. “I think even the 4 million target will be a little hard to reach, and they may want to consider revising it again.“ He believes that sales of EVs in China are held down by “the same concerns as elsewhere on the globe: Range, infrastructure, and price.” As the Chinese market matures, Seki hopes to convince Chinese customers to buy a Leaf, or rather a Venucia e30, as a second car, for shopping runs around town.

Seki figures that by 2017, the market for EVs in China will be anywhere between 100,000 and 400,000 units annually, and he hopes his company to capture some 20 percent of that, by Chinese standards, rather tiny market.

By the same time, Seki hopes to be looking at overall sales of 2 million units annually, or a 10 percent share of the Chinese market, which should be quite doable – unless there is a re-run of the island troubles.