Visit to a Tesla Service Station in Beijing, China 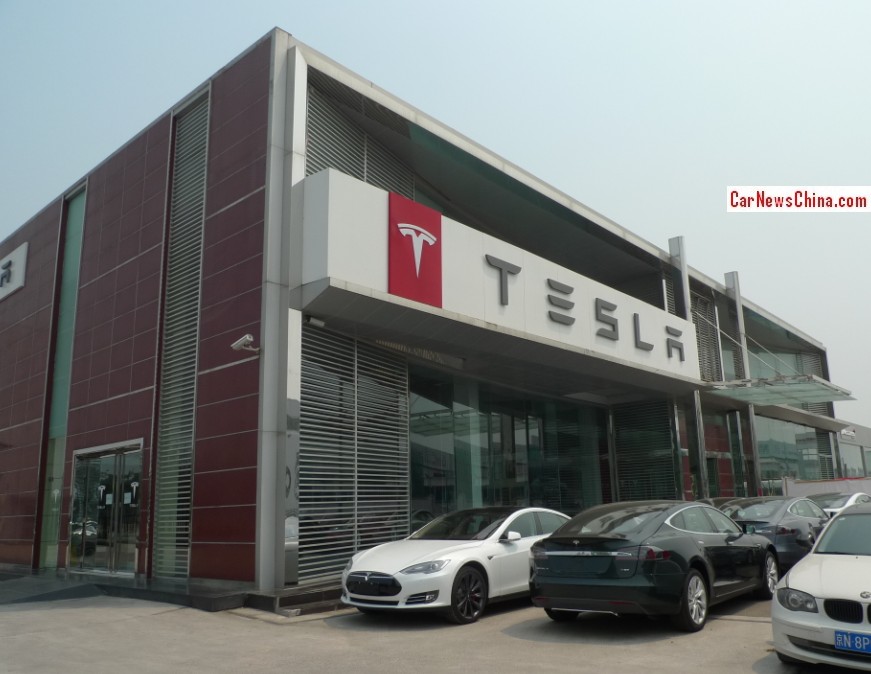 Yesterday I went to a Tesla Service Station in Beijing for an inspection tour. I came uninvited and anonymous. It is the only service station in Beijing and only the second service station in the whole of China, the other one is in Shanghai. The station is located in a large two-story building on a large car-dealer area near the Golden Port race track in north east Beijing, a rather far away place without much action going on. 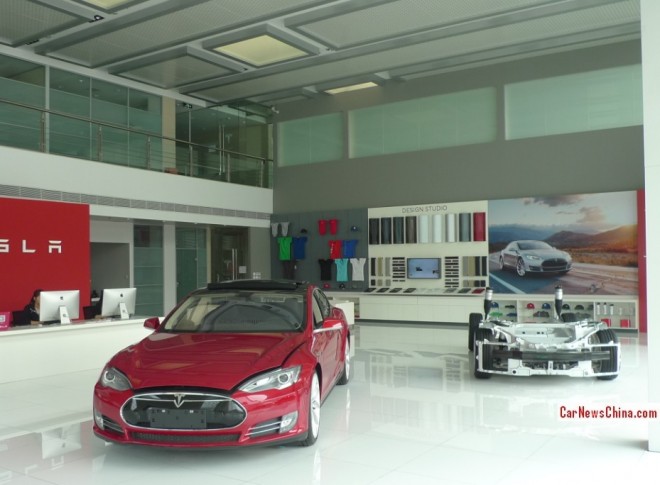 I entered the center. On the left two ladies hiding behind large Apple computers. They completely ignored me. There was no one else around. A red Tesla Model S with the bonnet open was the center’s center piece, flanked by a demonstration platform on the right. 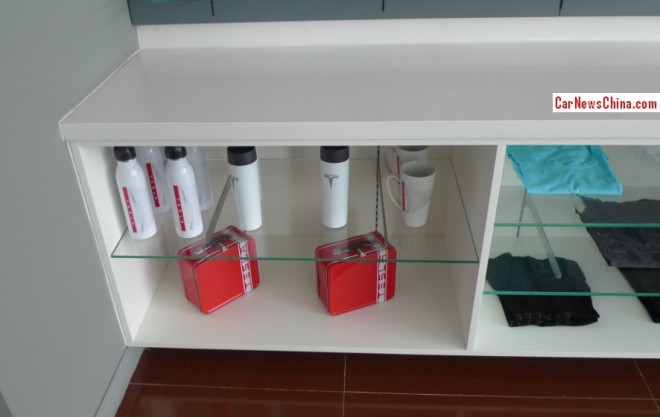 The center was selling all kinds of Tesla thingies, cups and t-shirts and such, freshly imported from America with prices still in USD. 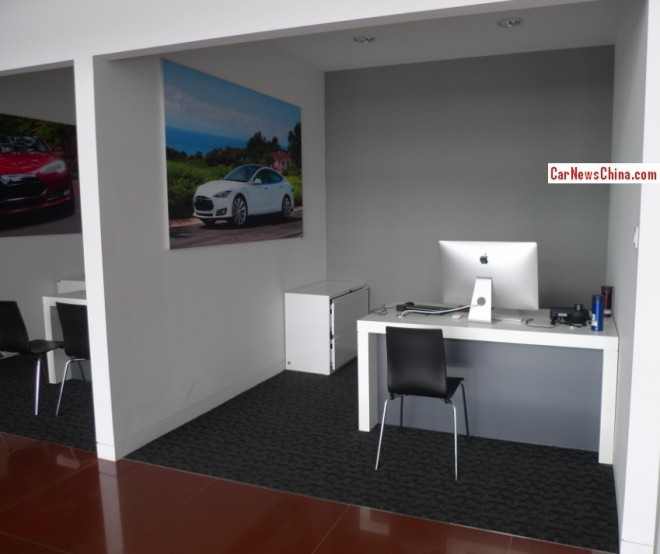 There were six of these trendy looking units in the back. Huge Apple computers again. The computers were switched off. Carpet looked very clean, just like the rest of the center, not a dirty spot in sight. 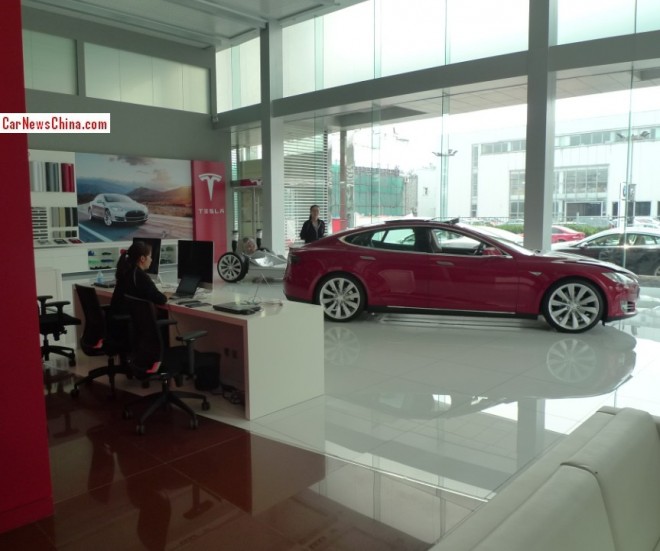 After some ten minutes I was finally addressed by one of the ladies in black, the one standing behind the red car. She kindly welcomed me with the words “No pictures inside!”, in a very loud voice. She was likely afraid I wouldn’t hear her, as I was some twenty meters away. The other girl continued to ignore me completely, staring intensely at a small laptop computer. 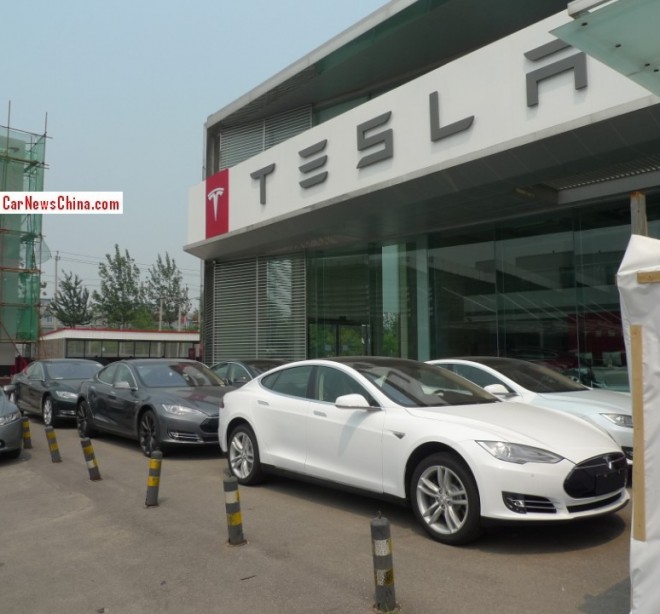 The shouting girl told me the service center was responsible for delivering cars to customers. They had six new Model S parked in front of the building, and another one to the right. None of the cars had a license plate, and the girl told me Tesla buyers in Beijing do indeed need to join the electric-vehicle-license-plate-lottery to get a license plate. The annual quota is 20.000 cars and applications are as high as 5000 per month, so Tesla buyers need quite a bit of luck. 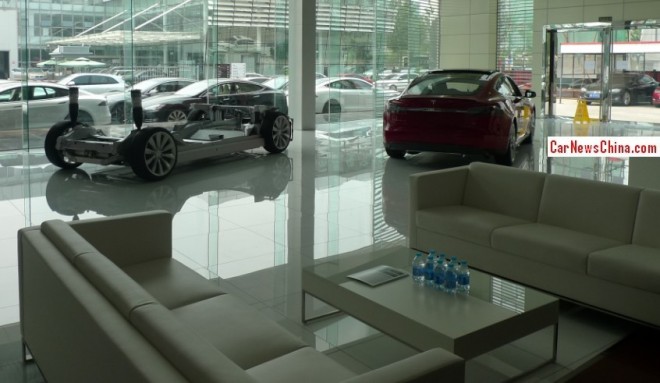 Strangely, Tesla will not build a charging station at the service station. The girl didn’t know why, saying only that ‘head office’ had decided so. The service center is also not a store, decidedly not, she emphasized that. The only store is in central Beijing, and that is currently the only store in China. I pushed hard for sales numbers, but to no avail. Shouting girl said it was Tesla policy not to tell, and that she didn’t know the numbers anyway.

An interesting visit indeed. Tesla is selling cars but not in great numbers. Tesla is opening new facilities but in a kinda messy way and in strange places. The license plate problem seems to be the biggest hurdle, as long as that isn’t solved buyers will be wary. Tesla did manage to find a solution in Shanghai, but not yet in Beijing.

I will go back to the service station in about a month or so, for another inspection…