China Car History: The Fourth Prototype Of The Hongqi CA774 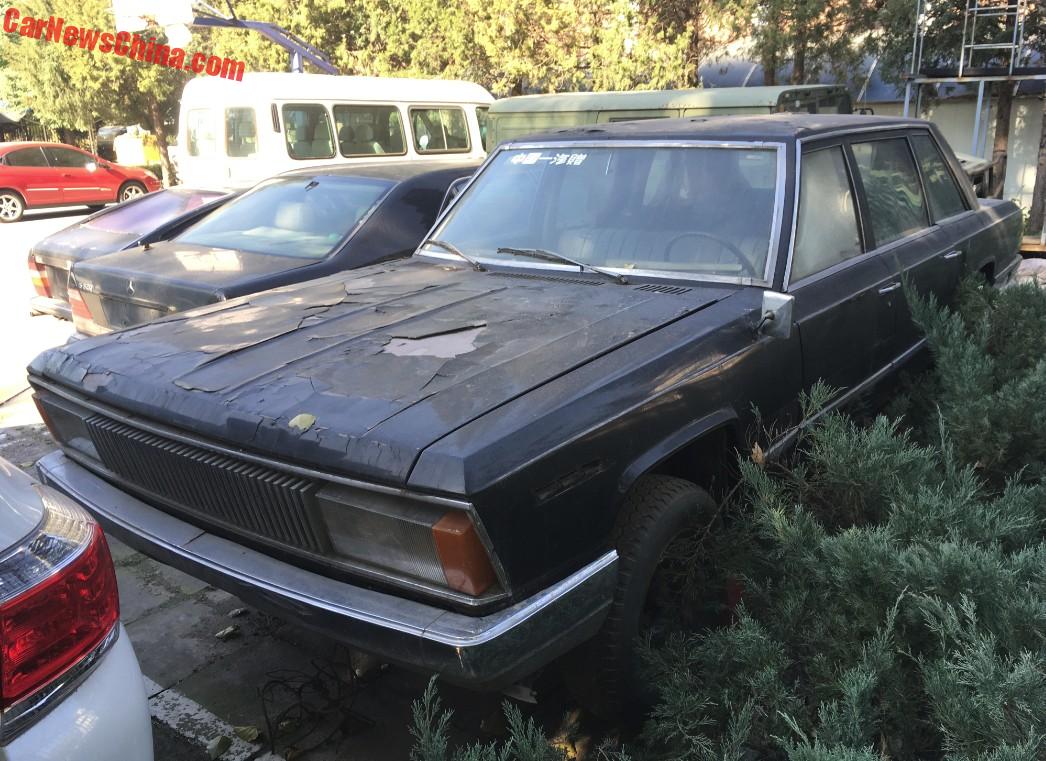 Today in China Car History the fourth prototype of the Hongqi CA774, once intended as the successor of the famous Hongqi CA770 state limousine. Six prototypes were made from 1972 until 1979 but the CA774 sadly never saw production.

At least four prototypes are still around. One stands in the Hongqi Museum in Changchun, another one in the museum’s warehouse, one used to be at the Dalian Classic Car Museum and now stands in the Beijing Classic Car Museum, and the fourth car stands abandoned on a parking lot on the Tsinghua University in Beijing, where I found it in a sad and sorry shape.

The fourth prototype had the designation CA774-4E. Hongqi made two cars, seen here together in 1975. Of the other prototypes they only made one each. They are counted by prototype: 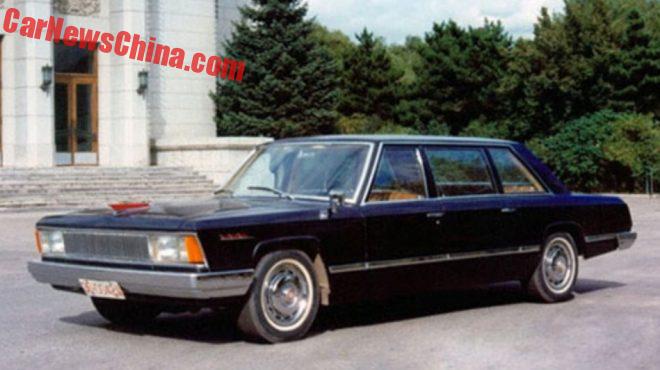 The CA774-4E has square-shaped headlights, a very tiny mirror, and windows with curved glass to improve aerodynamics. It was designed by the 26-year old Jia Yanliang, who also penned 1/2/3.

It was powered by the same 5.6 liter V8 as the CA770, mated to a four-speed automatic, sending horses to the rear wheels. The body was made of “high-strength thin steel plate” to reduce weight. It had independent front and rear suspension, radial tires, disc brakes, and power steering. 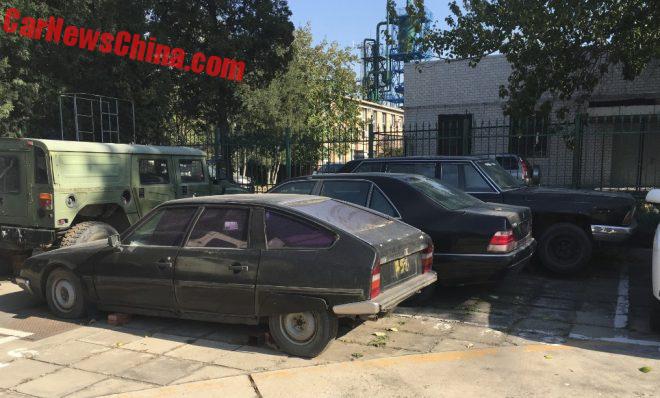 The CA774 stands in a corner of a parking lot of the Department of Automotive Engineering (web) of the Tsinghua University in Beijing. It is not exactly sure which of the two prototypes it is, but by carefully comparing photos I believe it is the second one, the car in the foreground of the twin-photo.

The CA774 has been on the parking lot since at least 2004 but it has been moved around from side to side and corner to corner. It stands on its current location since 2014, accompanied by a Dongfeng EQ2050, a W140 Mercedes-Benz S320, and an ultra rare (in China) Citroen CX 20. I will write a separate post on the CX later. 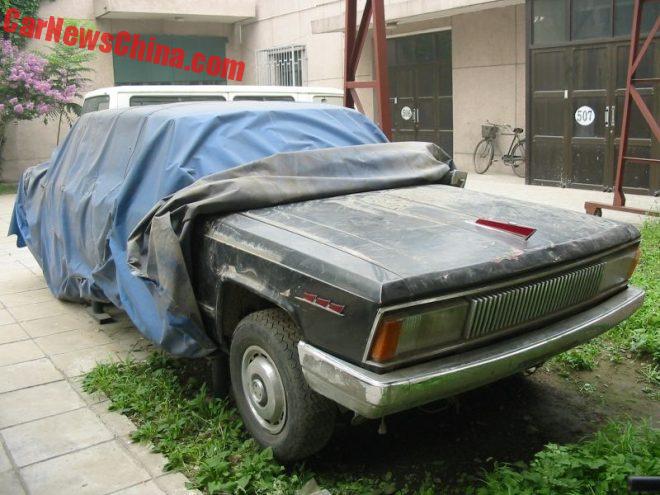 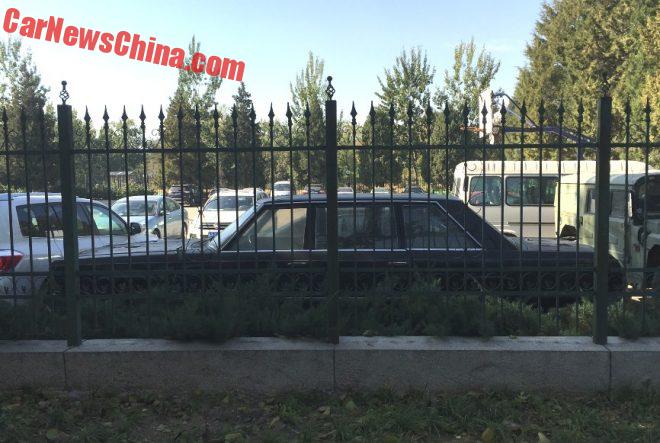 The CA774 seen from the other side of the fence. The prototype was a gift from First Auto Works (FAW), the owner of the Hongqi brand, to the university. The car has ‘FAW-gift’ stickers on the front and rear windows. It is however horrible how the Department of Automotive Engineering threats this special gift. They just leave it out in the open to rot! They should know better. They should be better. 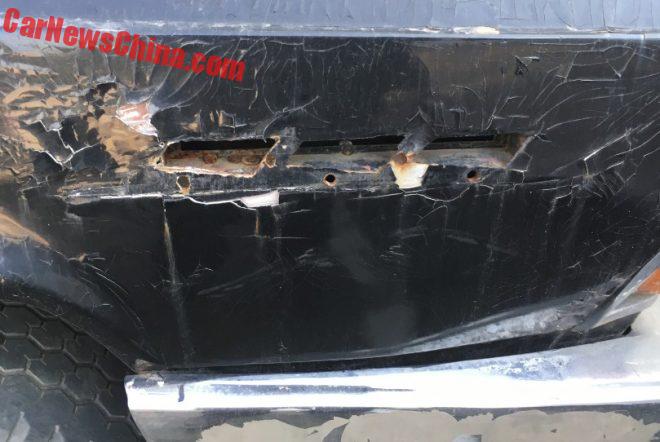 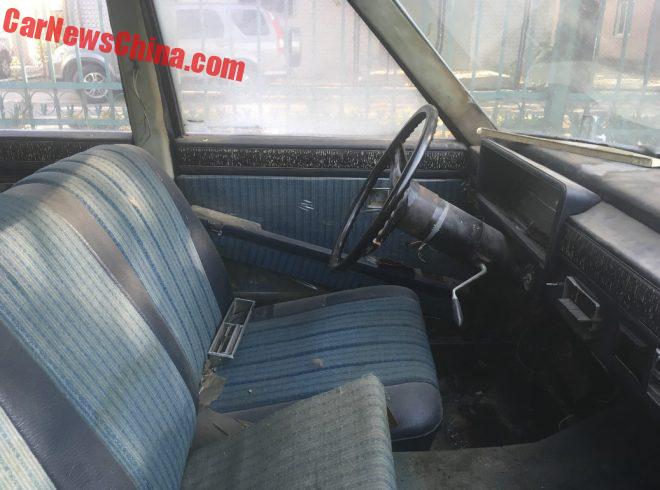 Happily, the doors were open and I slipped inside. 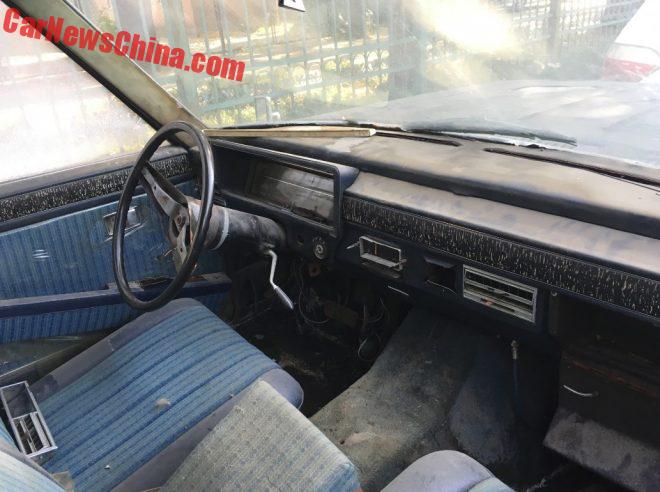 The interior was in a surprisingly good shape, dirty and dusty, but far from dead and gone. The seats are made of blue fabric with leather on the sides. The blue fabric comes back on the doors. The wood panels in the dashboard and doors are of a very wild design, unusual for a Hongqi, but everything is as it was in 1975. The gear lever is mounted on the steering wheel column. The radio is sadly gone. There is a hole between the radio and the central air vent. The hole likely housed the control unit for the heating system. 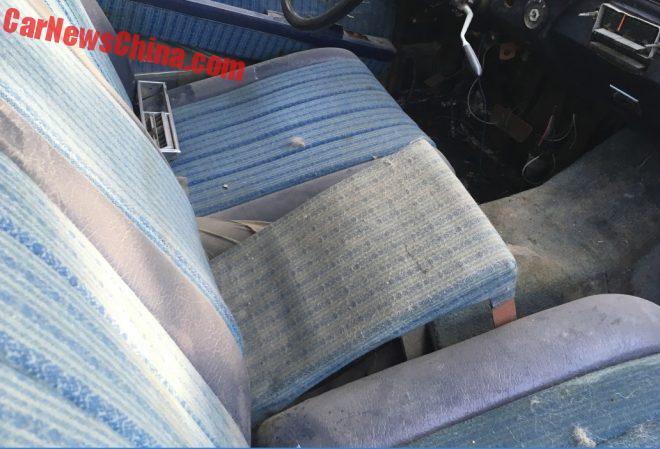 The front bench has two seats with a small jump-seat in between. 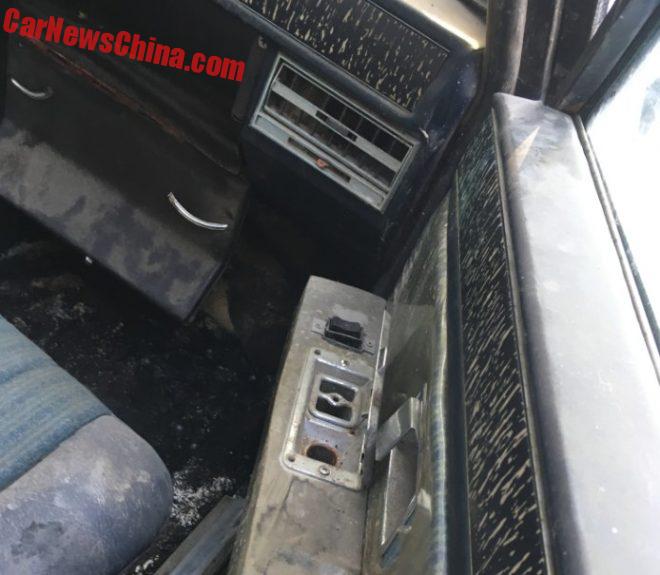 Glove box is open, there was nothing inside. Decoration on door panel and dash is almost psychedelic. 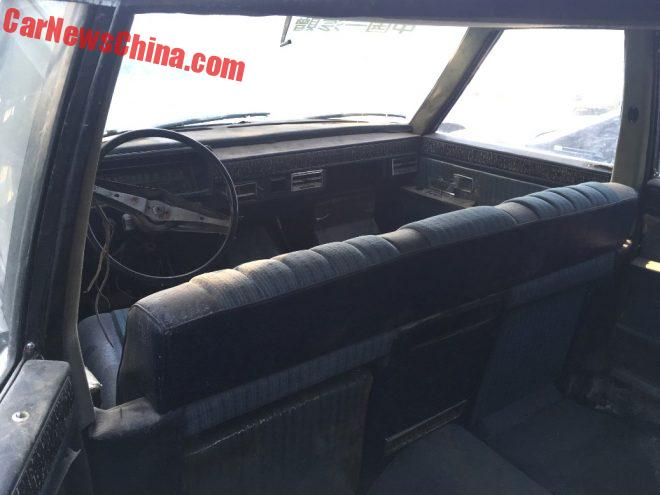 There were two jump-seats attached to the back of front bench. The one on the right is gone. 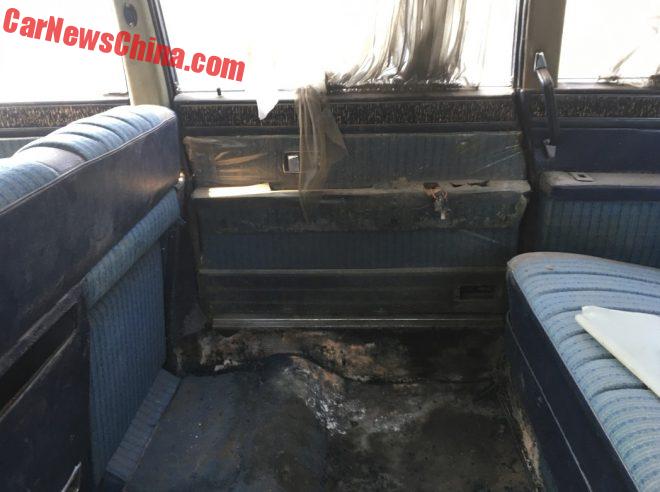 More blue and more decorations. Curtains all around the rear-passenger compartment. The floor has been ripped out. 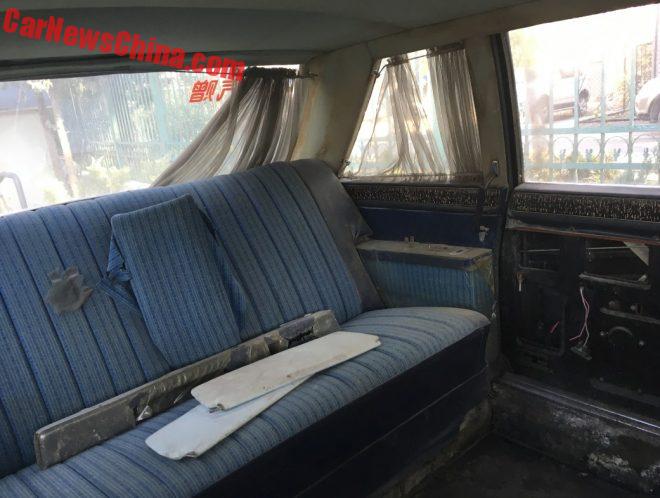 The rear bench is wide enough for three, with a high armrest on each side. Thick layers of cloth on the pillars and ceiling. 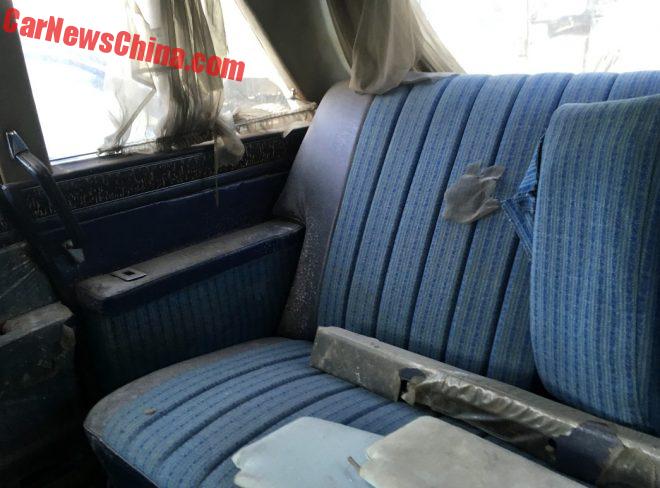 I sat on the bench for a while. Very comfortable. I felt like a real party leader. The curtains are without any doubt 1975 originals. They need a wash but they are mostly in one piece. 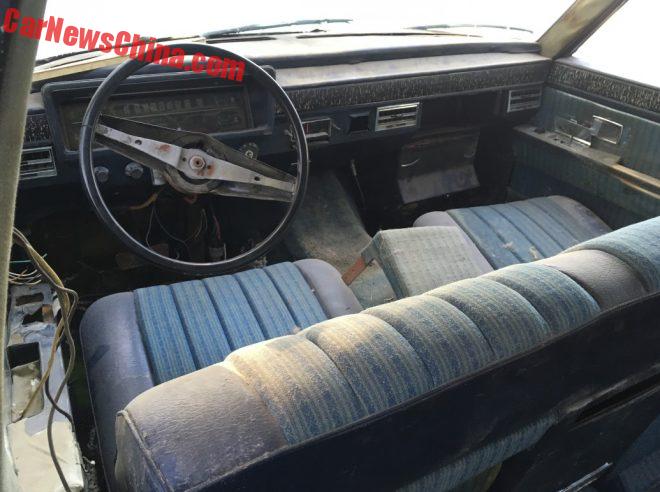 The spoke of the steering wheel is gone, but the instrument panel is in good shape. 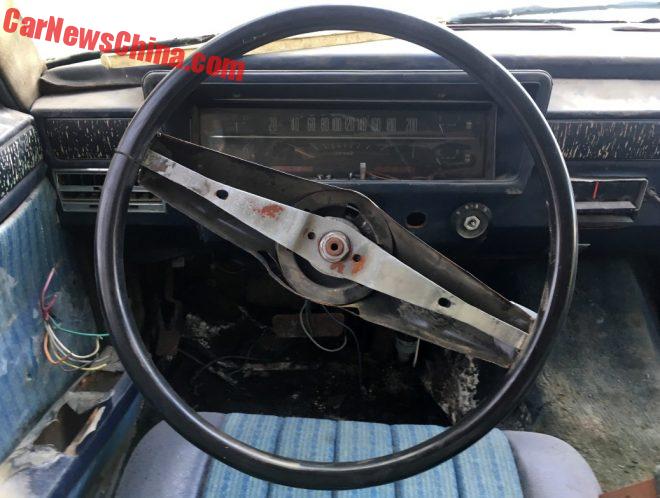 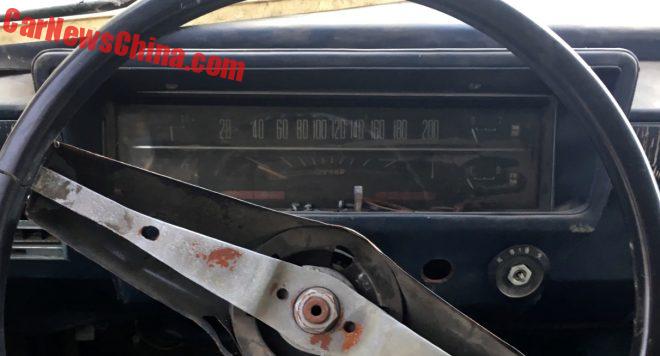 Speedometer goes to 200 kilometer per hour. 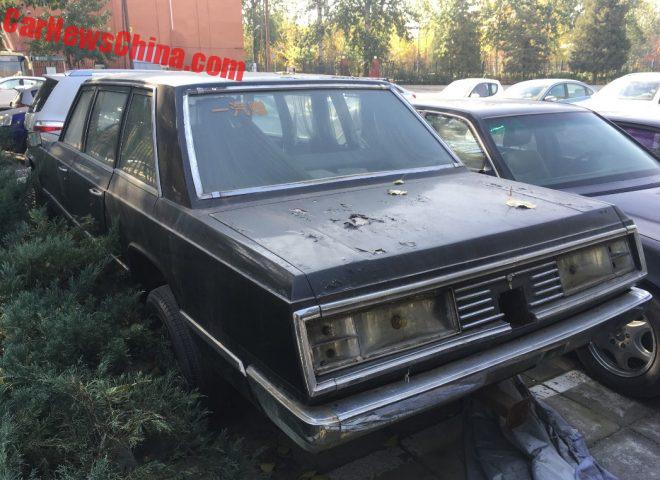 The rear with a large window in a chrome frame. The entire rear is set in another chrome frame. Ultra wide lights with five chrome bars in between. There is a square shaped hole in the middle, it housed the mechanism for opening the trunk and the panel for the Hongqi badge. Compare with..: 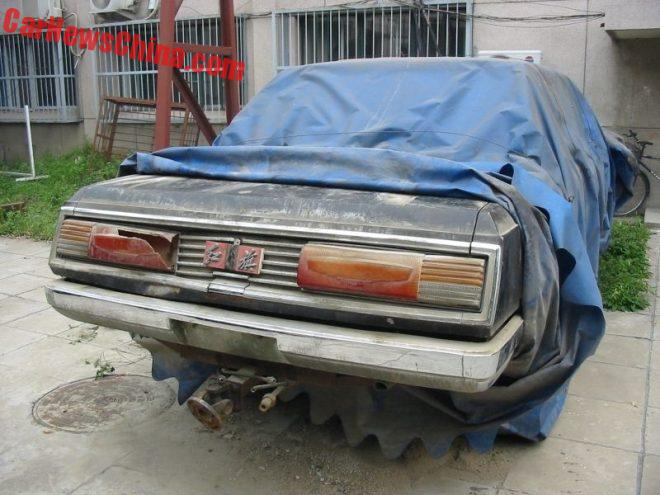 2004. Photo by Felix Bai. The lights are still on the car the the Hongqi badge sits proudly in the middle. 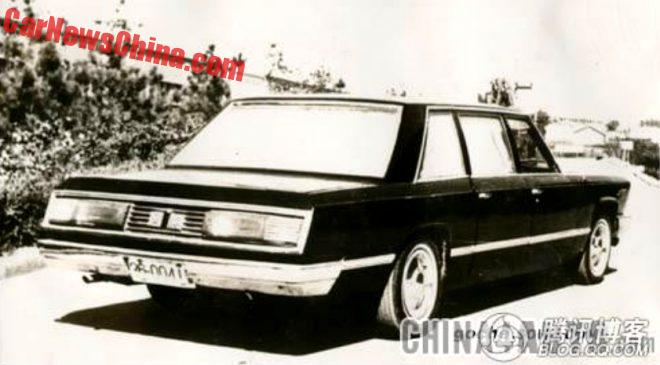 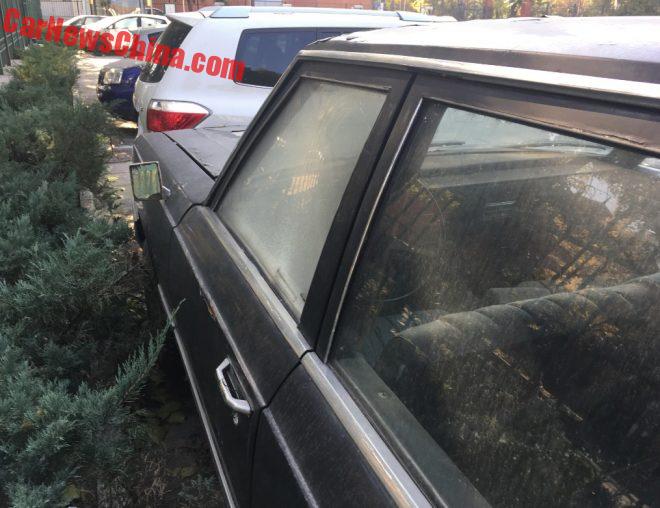 The body work itself is not in a very bad shape. Paint has come loose here and there but I didn’t see much rust or rot. The air in Beijing is very dry and there isn’t much rain, and that keeps a lot of abandoned cars alive. The door handles and single mirror are still on the car. 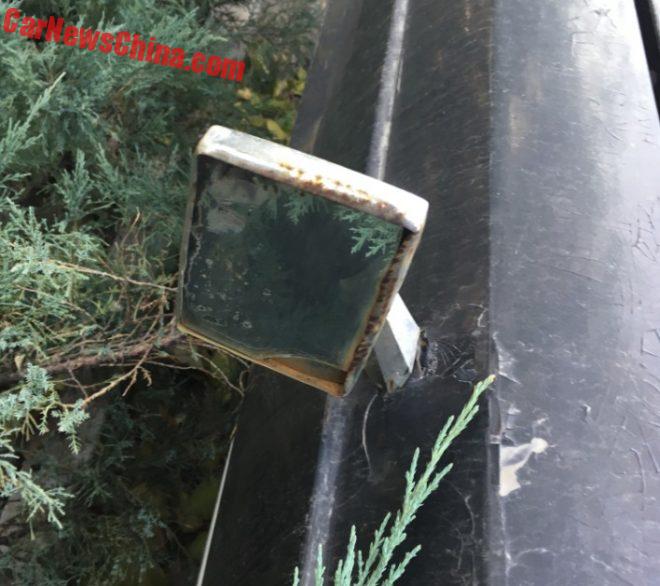 This appears to be the original mirror, with the bushes growing straight trough it. I carefully tried to put it back in its horizontal position but is squeaked and screamed, so I let it be. The mirror is very tiny for such a big car, not big enough by far, but very stylish. 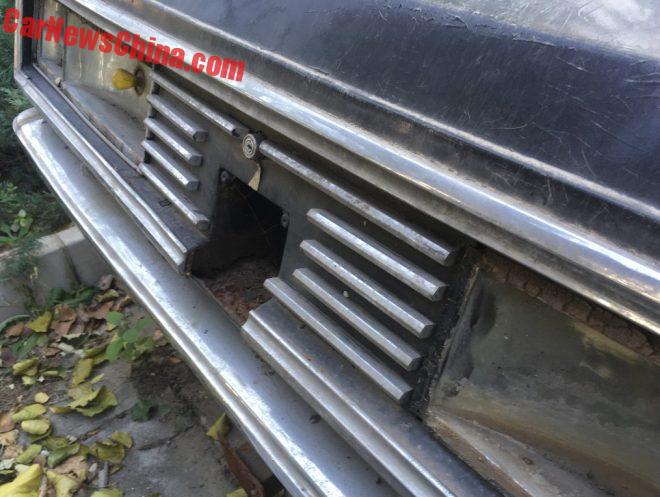 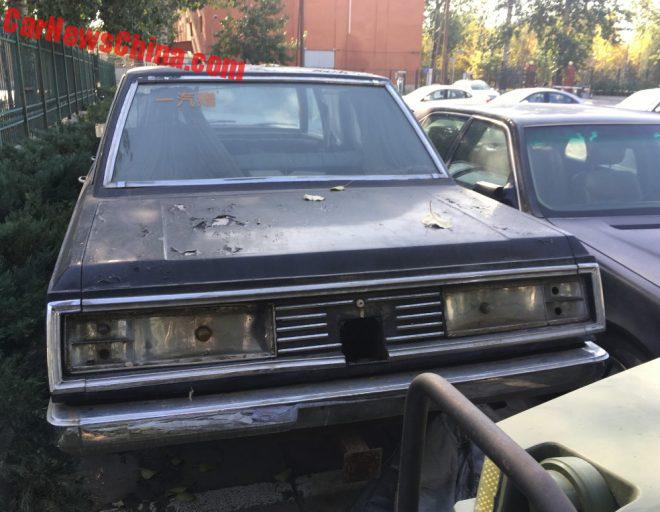 The car stands on jacks which might have saved some of the suspension. But there is a very worrying steel bar fitted under the floor, also visible in the photo from Felix Bai. I greatly fear the Department used the classic Hongqi for some horrible experiments. 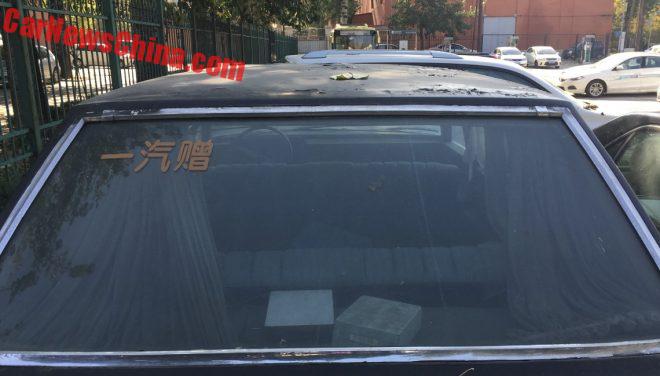 Note orange characters: Yiqi zeng. Yiqi is short for Yi Qiche, or First Auto, which again is short for First Auto Works. Zeng means “to give as a present”. I wonder whether FAW knows how their priceless prototype has been left to die on a murky parking lot. Probably not. And even if they knew, the likely wouldn’t care. There still isn’t much respect for the old in China. 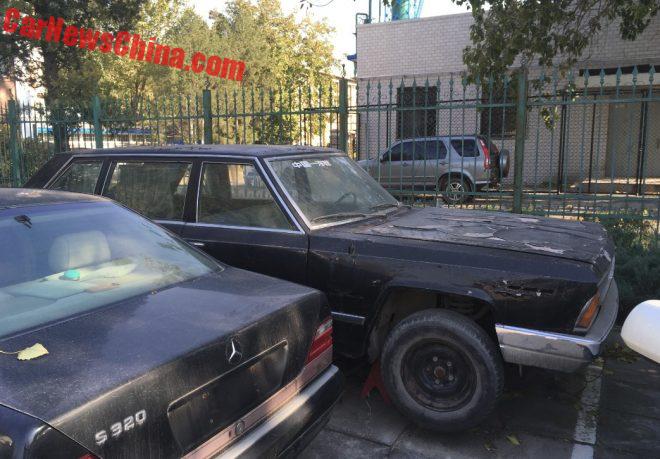 The CA774 was a giant of a car, see how small the S320 seems to be. I think the car can be saved with a lot of love and a lot of money. It is not beyond repair and the interior is all right. I couldn’t open the hood bu I could see there was an engine inside. Let us all hope someone will stand up and take this brilliant prototype away before it is too late.

With many thanks to Erik @ ChineseCars.net and Felix Bai, technical info via 365jilin.