Visit To The Hongqi Factory Museum In Changchun, China. Part 2 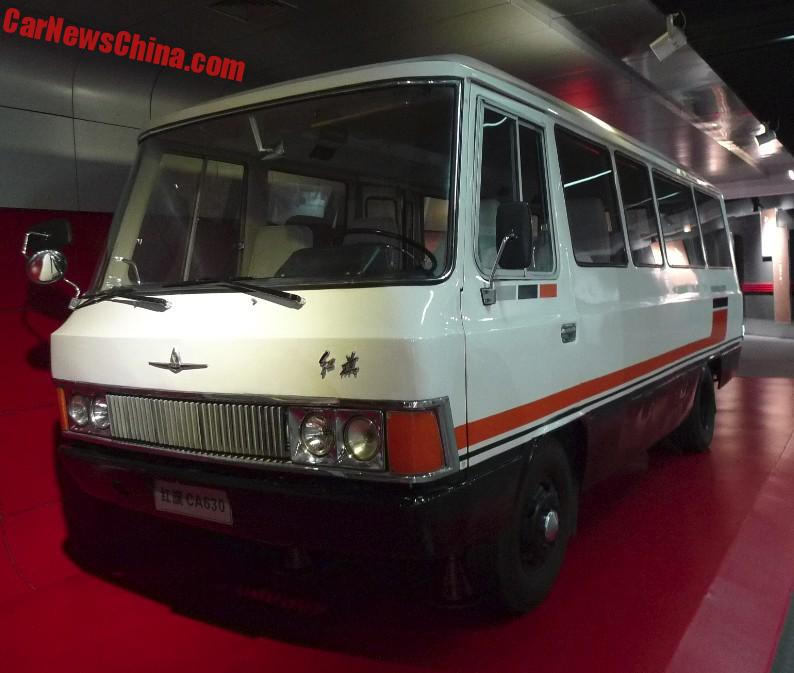 Time now for Part 2 of my visit to the Hongqi Museum in the great city of Changchun in Jilin Province in China. Part 1 plus introduction here. Starting immediately with the beautiful Hongqi CA630 VIP bus, manufactured from 1980 until 1987. Racy decals are perfectly 80’s!

The CA630 was designed for VIP transport. Intended customers were the Chinese central government, local governments, state-owned high-end hotels, and state-owned high-end travel agencies. The CA630 could seat a maximal of 19 people including the driver and a guide.  The V8 engine has a capacity of 4.52 liter and an output of 165hp. Transmission is a four-speed manual, sending power to the rear wheels. Top speed was rated at 100 kilometer per hour. 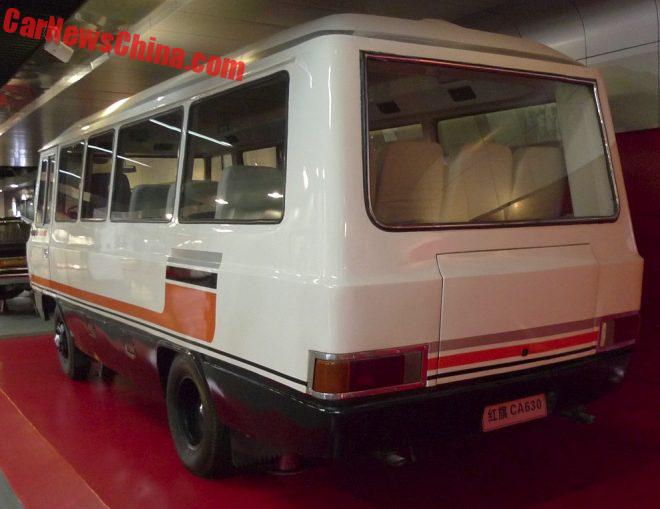 Two exhaust pipes, a big black bumper, and the orange striping continues even over the rear hatch. Love for the black wheels.  Size: 6260/2060/2440, wheelbase 3300. Hongqi also made a larger CA640 which could seat 21. On the Beijing Auto Show in April Hongqi showed a concept of a new VIP bus, but whether it will see production is yet unclear. 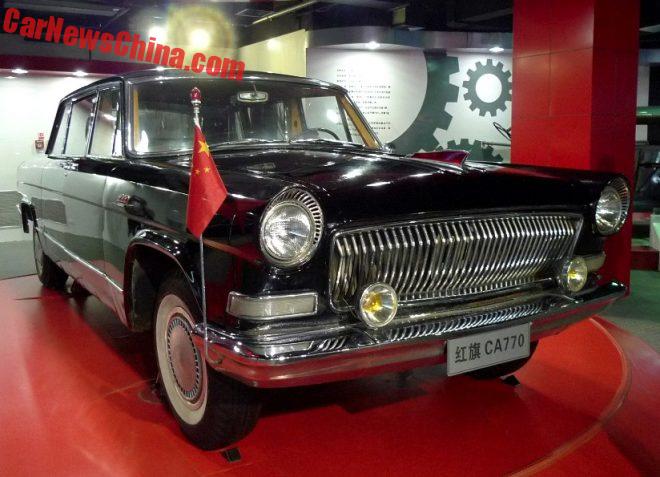 Moving on the best known Hongqi of all; the mighty CA770. It was manufactured from 1966 until 1981, and there were many variants including an ambulance and an open-top parade car. This particular example was originally sold to the central government. 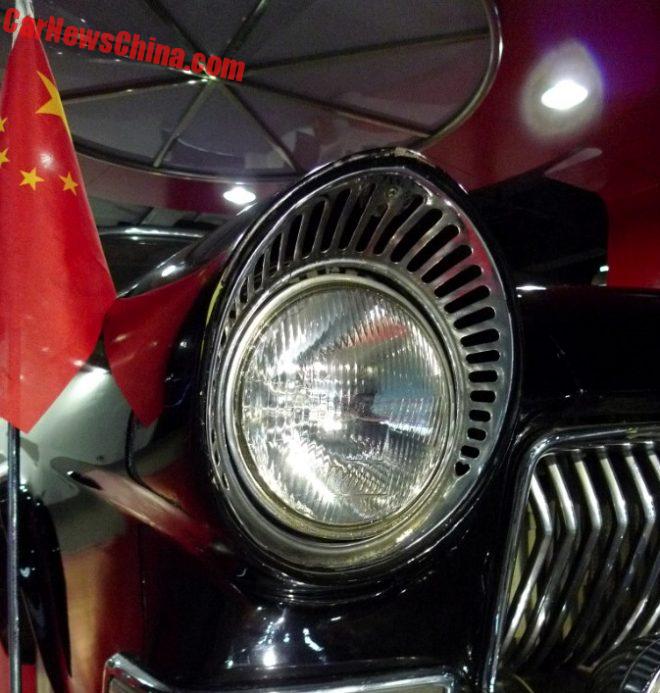 Brilliant art work in the lights including two heart-shaped cutouts below the vents. 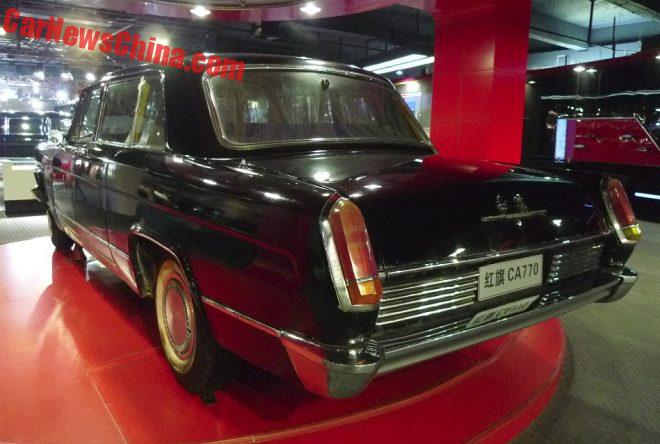 The rear window is huge, fitted here with a privacy curtain. The rear deck is endless, ending up just above the bumper which is flanked by six shiny metal bars. 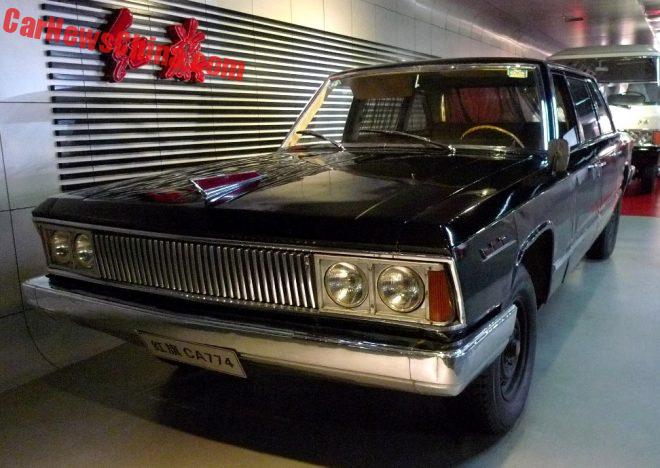 An ultra rare Hongqi CA774. The CA774 was designed to replace the CA770. Five prototypes were made from 1972 until 1979, but the CA774 sadly never saw production. The car on display in the museum is the first prototype, with very straight lines and a huge rectangular grille with vertical bars and flanked by two round headlights on each side. 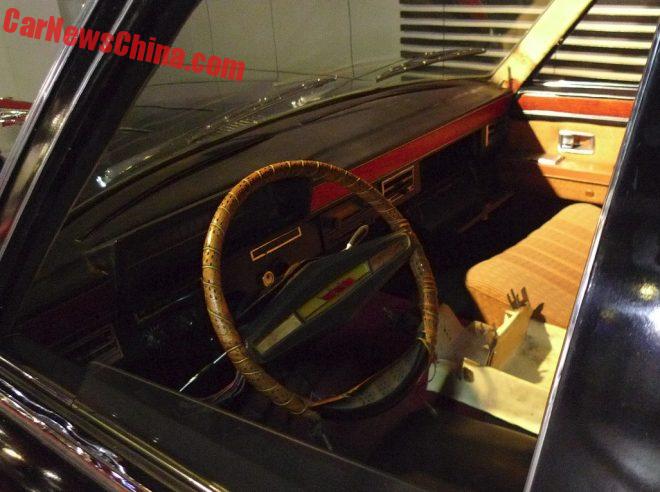 At least two more prototypes are still around today. The 1975 fourth prototype, with square shaped headlights, stands outside on a parking lot at a university in Beijing. It is in very bad shape and it needs to be saved soon or it will die. 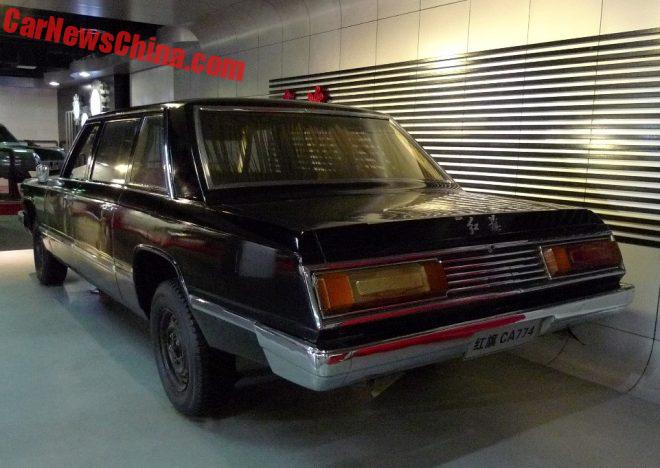 Not as impressive as a CA770, but still a massive vehicle. Hongqi badge on the back, topping five horizontal metal bars with a rather complex light units. The CA774 would have been a looker in the seventies, mixing Russian and Chinese design elements, too bad they didn’t make it.

The three-red flag badge is located on the front fender in front of the wheel. That too is special as this badge is located behind the wheel on all other Hongqi’s. The three flags stand for: Socialist Construction, Great Leap Forward, and Peoples Commune, the three main government programs at the time. 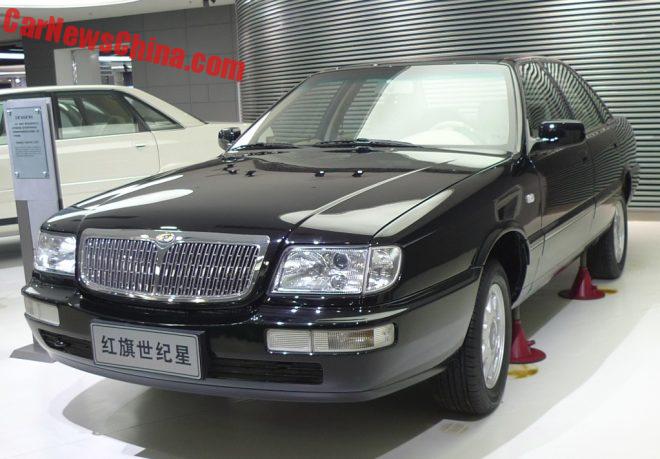 The museum had two Audi-based Hongi’s on display, both standard-body cars and both looking like they were made yesterday. Production started in 1996 and lasted until 2004. All were based on the Audi 100/200 which at the time was made at the FAW-Volkswagen joint venture. FAW of course is also the owner of the Hongqi brand. There were zillions of variants, including long-wheelbase versions, several stretched limousines, parade cars, and open-top parade cars.

The black car is the CA7202 Shijixing, or ‘Century Star‘. The CA7202 was manufactured from 2000 until 2004. Design was radical for Hongqi, with a completely redesigned front and rear end. It had a luxurious interior and was powered by a Nissan-sourced VG20 2.0 V6, a rather special engine with 125 horsepower. Hongqi also made a stretched-limousine version of the CA7202.

The CA7202 Shijixing was positioned above the… 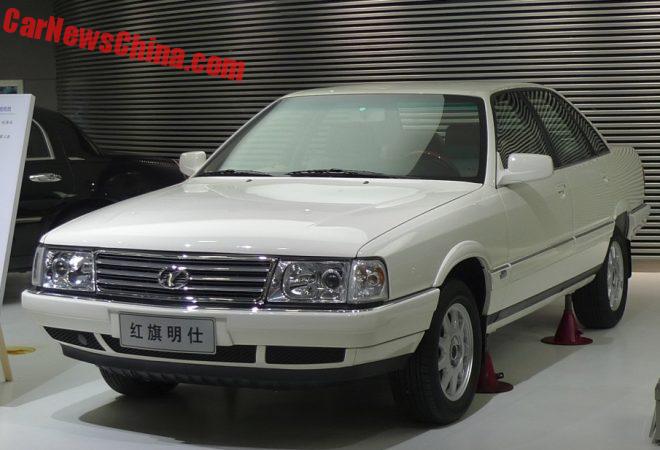 … CA7180 Mingshi, looking much more like an Audi than the CA7202. The Mingshi, best translated as “bright official”, official as in “to be a government official”, was manufactured from 2001 until 2003. It was the last Audi-based Hongqi that would hit the market. The CA7180 was powered by an Audi-sourced 1.8 with 125hp, mated to a five-speed manual. There was also a stretched variant which was called the Hongqi CA7180 A2EL1. 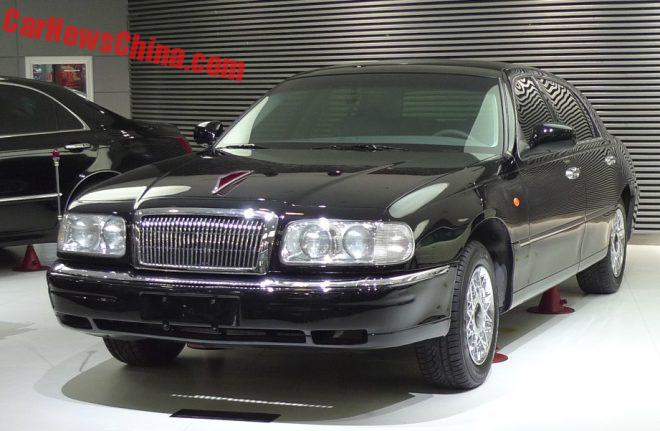 This is the Hongqi CA7460, a massive limousine positioned between the Audi-based cars and the ever-continuing CA770. The CA7460 was based on the second generation Lincoln Town Car. Under an agreement with Ford the completely finished cars were shipped from the U.S. to China where Hongqi would change the grille, lights, and badges. A pretty lazy effort but still a great looking car. Power came from the Ford 4.6 liter V8 which was good for 210 horses.

Hongqi was less lazy when it came to stretched-limousine variants. They made three of ‘m, all manufactured in China based on the standard-wheelbase Town Car. Also see our complete write-up about all the CA7460 variants. 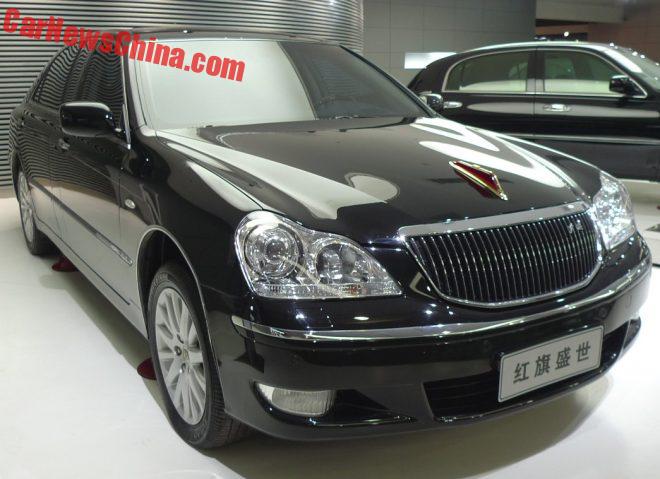 And here we have a truly special car. This is a stretched variant of the Hongqi HQ3 Shengshi. The Hongqi HQ3 was the successor of the Audi-based Hongqi’s. It was manufactured from 2006 until 2010. 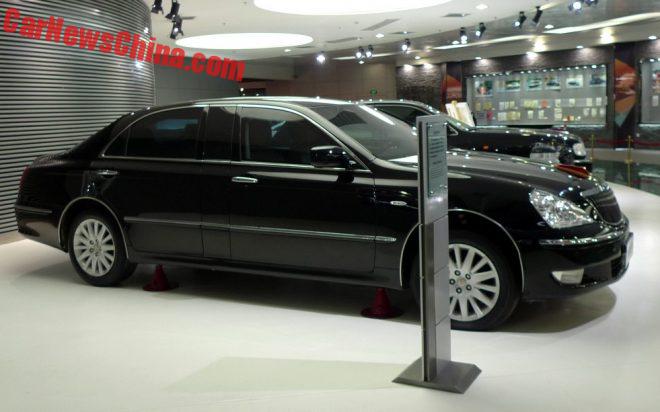 Hongqi designed three special variants of the HQ3, but sadly only made one example of each. The first one is this long-wheelbase variant, extended by about 25 centimeter in the middle. The second one is another stretched limousine, the massive New Flagship, which was extended by 55 centimeter. The third car is an open-top parade car which has been on display in the museum as well, but sadly not when I was there. 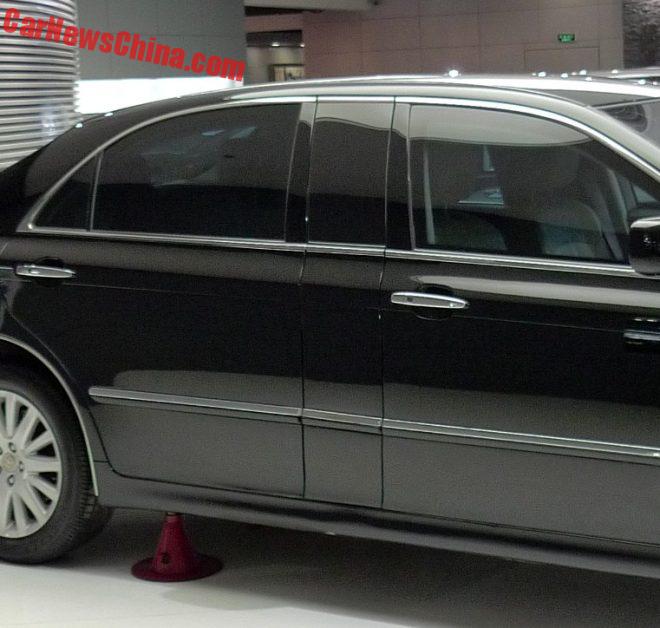 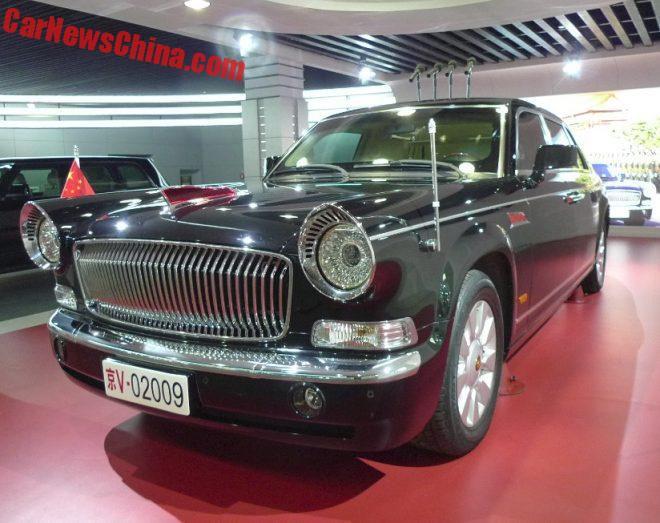 This is the Hongqi CA7600J parade car. Only two were built for the 2009 military parade in Beijing. President Hu Jintao used this very car to inspect the troops. It is a massive vehicle, 6.4 meters long and a full two meters wide. It has four microphones on the roof for the president to whisper his greetings and commands. 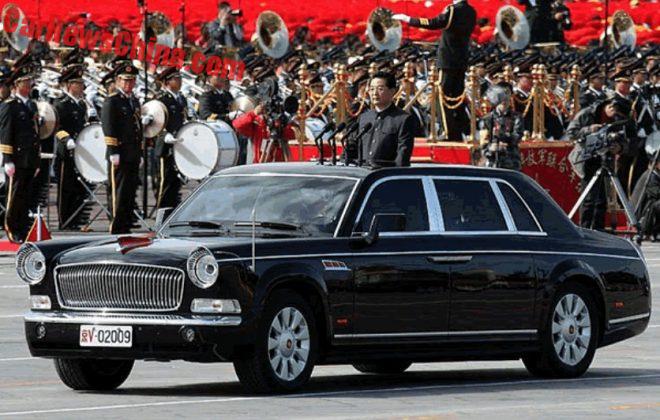 President Hu Jintao during the 2009 parade. 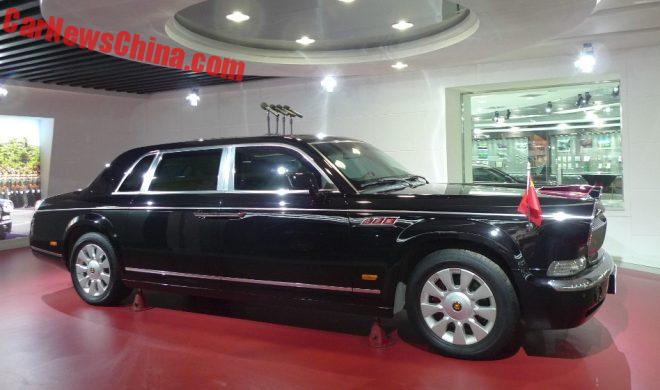 The CA7600 is the true successor of the CA770; gigantic, luxurious, and with suicide doors.

A CA7600L stretched-limousine variant was launched in 2010, but only for the government. The CA7600 was later renamed Hongqi L9. The L9 spawned the L-Series, which furthermore includes the Hongqi L5 and the Hongqi L55 parade car. All the L’s are powered by a V12 engine with 408hp and 550nm. There have long been rumors about a cheaper version powered by a V8 engine, but so far no show. 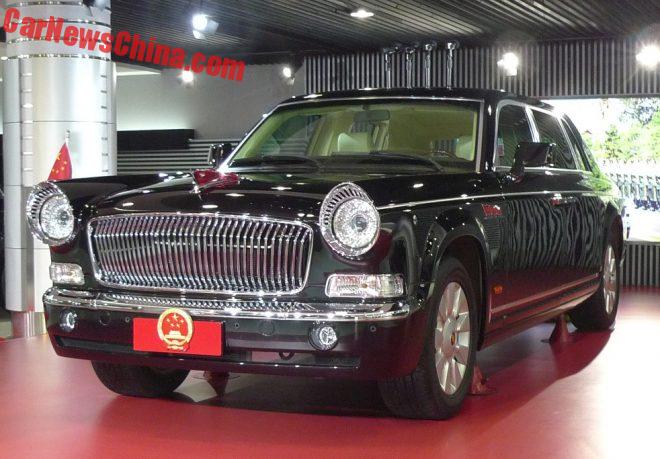 Moving on to another CA7600J. This is the very car used by president Xi Jinping during the 2015 military parade. Hongqi made just a single example. It too has four microphones on the roof for the president to bark his greetings and commands. 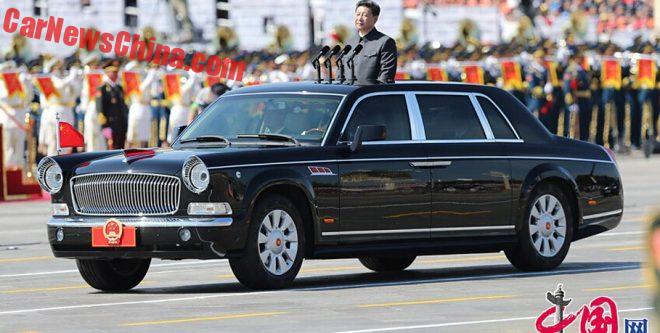 Xi Jinping during the parade. 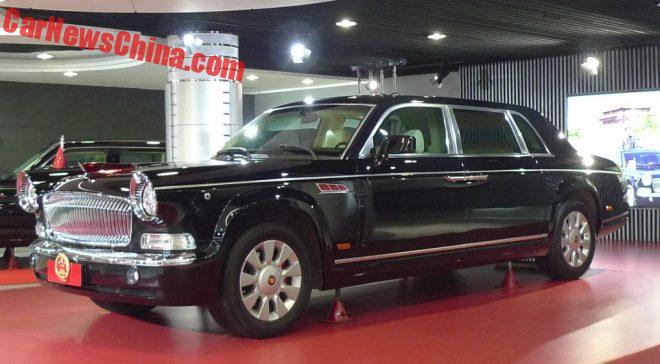 The J is fully armored, which is only useful if you don’t stick half of your body out of the roof. There was a lot of hope among Hongqi fans in the run up to the parade that Hongqi would field an all new parade car. Sadly they didn’t even bother to fit a different set of alloys. 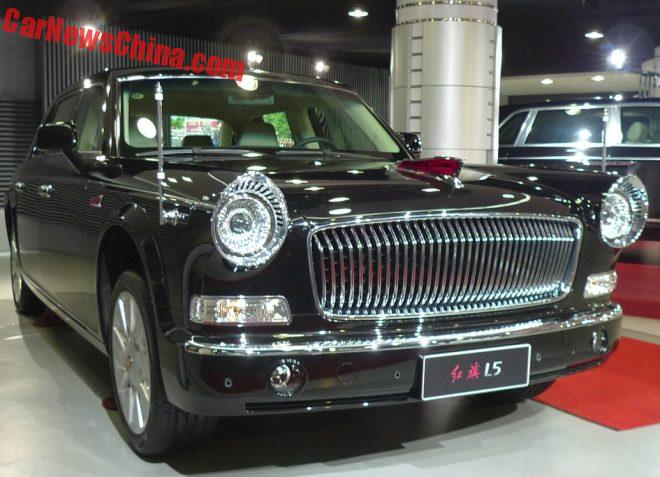 This is L5, the short-wheelbase variant of the L9. It has normal rear doors but is powered by the same v12 engine. The car on display is a government variant with a flagpole on the right fender. 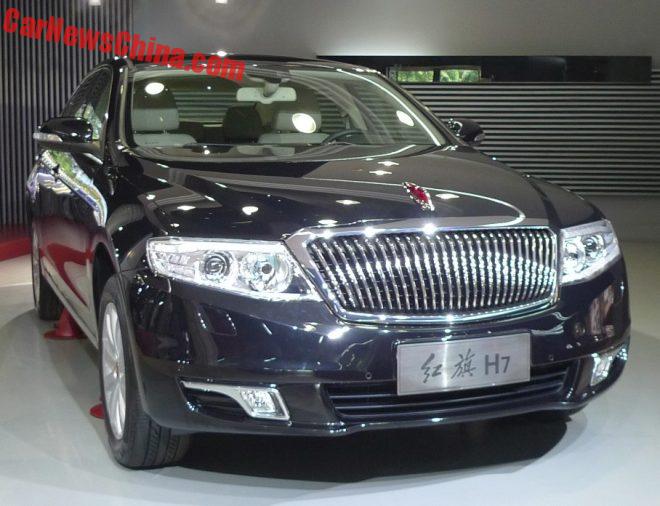 A Hongqi H7. The Hongqi H7 is the successor of the Hongqu HQ3. It is again based on a Toyota, this time on the fifth generation (S200) Toyota Crown Majesta. The car on display is a pre-facelifted car. The facelifted version debuted in April on the Beijing Auto Show. The H7 is available with a 1.8 turbo, a 2.0 turbo, and a 3.0 V6. Hongqi has been showing a hybrid on auto shows for at least four years now, but it hasn’t been launched on the market yet. 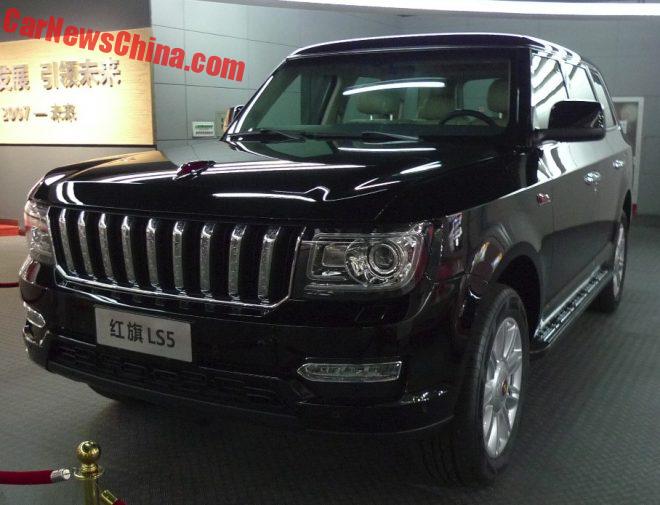 This is the second Hongqi LS5 concept car, it too debuted on the Beijing Auto Show, previewing the upcoming Hongqi LS5 SUV, the first SUV under the Hongqi brand. The LS5 will be powered by a twin turbocharged V8 with about 380hp and 500nm. The LS5 will hit the market sometime next year.

Well. Those were all the cars on display at the museum. It was great to be there and great to see those massive machines. In the next post I will show you the cars that also belong to the collection but that were not shown in the museum when I visited. 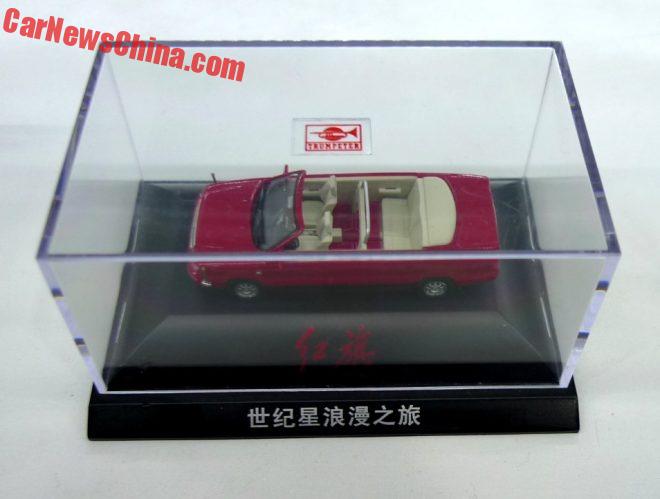 They also had a lot of Hongqi scale model cars. This one made me very happy. A 1:72 model of the Hongqi CA7202E3-L open top parade car, based on the CA7202 discussed above. The model was manufactured by the Chinese model maker Trumpeter, a company that mostly makes kits of all sorts of military equipment. It seems they don’t make the parade car anymore. Got to find one second hand!