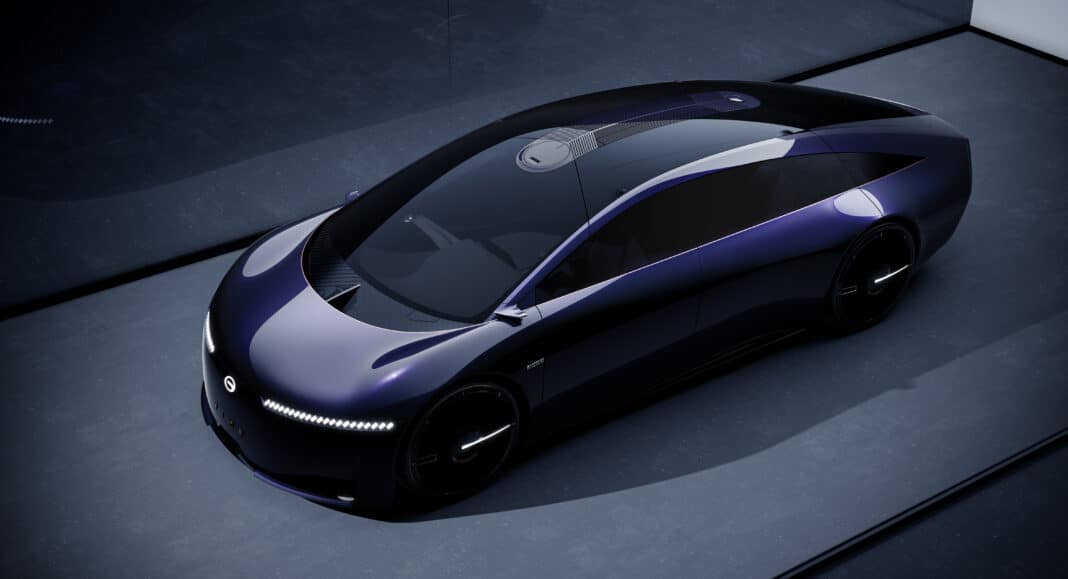 Fan is vice president of GAC R&D and the Head of Design responsible for one of the standout concepts unveiled at the 2021 Guangzhou Auto Show.

GAC shared with us some of their insights and inspiration behind the iconic creation, as well as sketches and behind the scenes photos from the concept’s development.

This is their design story.

Graceful and smooth, it looks almost like it could have been shaped by nature, like a pebble found on the beach sculpted by decades spent moving around the ocean.

In many ways, this is what the designers were looking for. TIME is an innate representation of nature that symbolises their vision for a zero-emissions future.

It also demonstrates an opportunity to reshape how we look at the space within a car and how we interact with other occupants.

The TIME is an advanced development on the ENO.146. It’s name indicates its world record for the lowest drag coefficient (Cd) on a passenger EV at just 0.146.

While the TIME concept can’t quite match that figure, it does scythe through the air very efficiently. A Cd of just 0.191 means it barely leaves a trace of turbulence in its wake.

The carefully crafted blend of curves and geometric lines are part of GAC Design’s new design language, dubbed ‘Teardrop on the Blade’. The intention is to capture the essence of the perfect aerodynamic shape and cut through the fluidity with crisp lines.

This manifests itself clearly in the side silhouette. The rounded front end blends into an elongated profile that resembles a drop of water travelling at speed through the air. A cab-forward design rises early before gently sloping backwards to a pointed tail that sits below the waistline and far beyond the rear wheel.

Lit from above, a diagonal line slices through the softly moulded flanks dropping towards the rear, dividing light and shadow.

At the rear, LED lighting is used to incredible effect. Red strands of light flow upwards and tuck under the rearmost edge to create a tunnel effect reminiscent of something from Star Trek.

The lightshow continues onto the wheels. At a standstill, a single beam of light dissects half of the wheel like a minimalist one-handed clock face. As the vehicle moves, the light creates a holographic projection called ETERNAL TIMER that gives a 3D illusion of space.

In stark contrast to the exterior, the interior is designed to be an oasis of calm and light for occupants. While a single recognisable driver’s seat takes centre stage, a swooping sofa-like ‘Möbius ring’ curls around the cabin from front to back creating a lounge space.

Light colours abound with predominantly white surfaces accentuated by rose gold highlights. Wooden flooring brings a natural touch to the interior, as does the purple insert under the driver’s seat that resembles the surface of a pond rippling from rainfall.

Adorning the right side of the interior, twisted white panels can be waved open or closed to adjust the light entering the cabin. At the same time, a full-length panoramic roof bathes the space in natural light. A floating dashboard creates a further impression of spaciousness, and, in the corner of the dashboard, a young sapling sprouts.

Above, the roof lights are said to be inspired by comets streaking across the sky.

GAC TIME – A study in possibilities

Like most concept cars, it’s highly unlikely that the TIME will ever see the light of day as a production model, at least not in this form, however what it can do is give a glimpse at the future design direction of the brand in a limitless setting.

“We employ art and technology to expound on the four key elements of our interior design philosophy – intelligence, mobility, rounds and squares,” says Fan. “Our interior space is a mobile living room where technology is within reach and art is within view.”

Perhaps most notable is that the TIME shows a completely new side to Chinese automotive design. The elegance and beauty on show is an expression of the newfound confidence that Chinese brands have developed in the era of the electric vehicle.

There’s an appreciation of the importance of nature and the environment, and recognition of how sustainable transportation can play a role in preserving it.

“Refined, elegant, and suave, the beauty of the TIME simply defies time and space,” Fan concludes. “It is a testament to our determination and competence to be the front runners of the EV race.”

One can only hope that some of the elements in this iconic design make their way into upcoming models from the brand. Perhaps the first opportunity will come in the form of the The upcoming AION supercar may just provide the first such opportunity.

For GAC, the TIME is now.