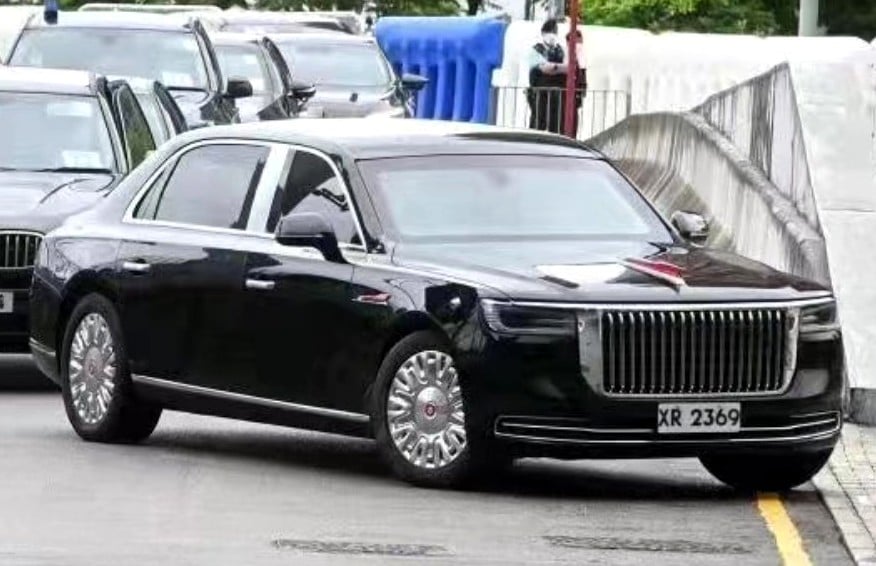 This is the Hongqi N701, China’s new state limousine. The massive car debuted during the visit of President Xi Jinping to Hong Kong on July 1. It surely looks the business with a giant chromed grille, huge shiny wheels, a raised roof, and flag pole holders on the front fenders.

The Hongqi N701 appears to be well over five meters long, with a stretched B-pillar and an extra long rear cabin. The bonnet is very long too, but the boot is relatively short. It has Hongqi (Red Flag) ornaments on the hood and on the front-fenders.

N701 is a code name. The real name is yet unknown, and maybe it’ll never get one. Hongqi will build only 50 examples over the next 10 years. The specifications of these state limousines are usually state secret, but we can expect either a V12 or a V8 under the bonnet. Hongqi got both engines in their lineup. The recently launched Hongqi LS7 SUV, for example, is powered by a 4.0 liter turbocharged V8 engine with 360 hp and 550 Nm.

The rear with two exhaust pipes, a shark fin antenna on the roof, and a surprisingly large rear window. On most state limousines, the rear windows are small and narrow, to protect the occupants against angry folks firing bullets or throwing stuff. But the car does appear to a armored. Characters at the rear: middle: 红旗, Hongqi, in handwritten Chinese. Left-bottom: 中国一汽, Zhongguo Yiqi, or China First Auto, with First Auto referring to First Auto Works (FAW), the owner of the Hongqi brand.

The grille is absolutely in-your-face, with the top bar running atop the headlights. The N701 was fronted by a Trumpchi GA8, and followed by several BMWs of the Hong Kong police.

The new state limousine seems to stand quite high on its wheels as well, perhaps based on an SUV chassis, just like the US presidential limousine.

Time for a look at Xi’s earlier cars:

The Hongqi N501 is a smaller state limousine. It debuted in 2018 and is mainly used during state visits by Xi to other countries. We haven’t seen is very often in China itself. On the photo a N501 with Xi on board during a visit to Italy.

The short-wheelbase version is called the Hongqi L5, used to ferry foreign visitors around. For a brief period, it was semi-available on the private passenger car market. The L5 came with the same V12 as the CA7600L and with a 4.0 V8 turbo with 375 hp and 530 Nm.

The best known version of the state-limousine if probably the parade model, with a large open roof, a set of microphones, and a special platform in the rear cabin. At least six of these parade cars have been produced for the 2009, 2015 and 2019 (pictured) military parades in Beijing. The next such festivity will be in 2025 the earliest, so it’s only then that we will see the N701 parade version.