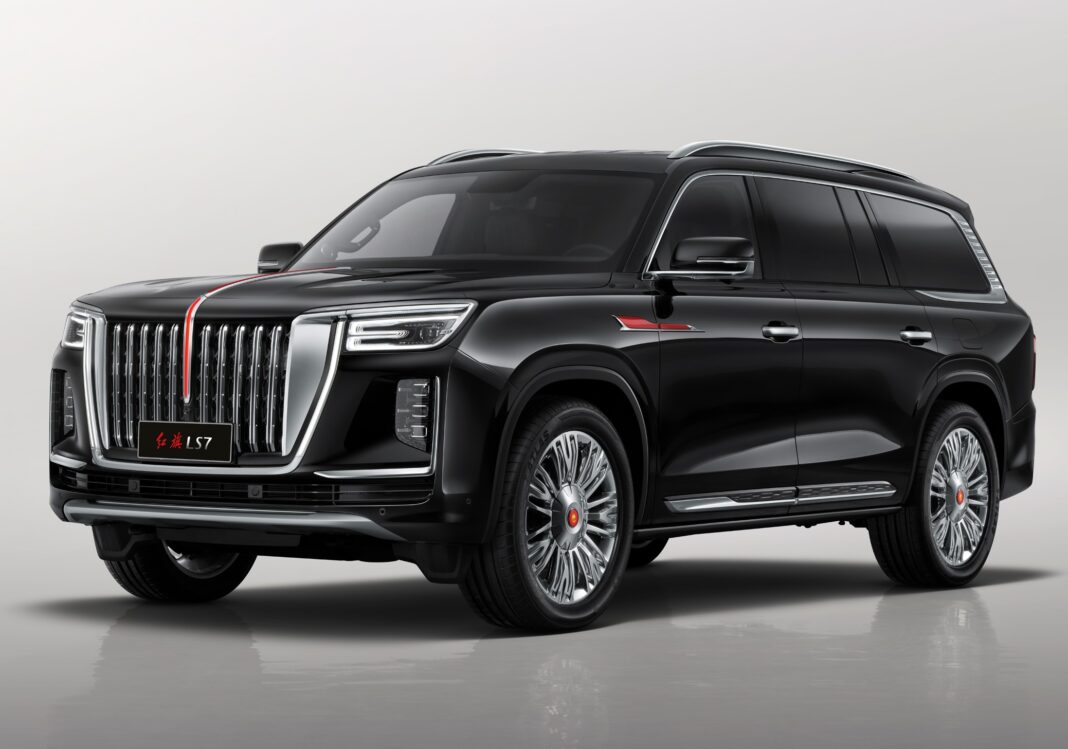 It sometimes seems that China’s iconic Hongqi brand is looking for a clear direction. Their current lineup consists of a wide array of different sorts of cars, ranging from small electric sedans to V12-powered state limousines, from a mid-size 2.0 turbo sedan to a high-end electric SUV. These cars are build on a variety of platforms, some developed by Hongqi and some partially borrowed from other car makers. The Hongqi LS7 is part of the Hongqi L-Series, a line of exclusive top-end cars. Size-wise, the LS7 is positioned above the Hongqi HS7, which is quite a large car already, although not nearly as huge as the LS7. The Hongqi brand is owned by First Auto Works (FAW).

Hongqi means ‘Red Flag’, hence the red-flag ornaments on the fender and hood.

The wheels have Hongqi’s old Golden Sunflower-logo in the center, a nice nod to the brand’s early history.

The LS7 stands on a body-on-frame chassis with a minimum ground clearance of 246mm. The dimensions are staggering: 5695/2095/1985mm, with a wheelbase of 3309 millimeter. That makes if by far the largest Hongqi passenger car ever made, not counting the state-limousines, which aren’t really passenger cars anyway.

The side board with the Hongqi name (红旗) in black characters on a white background.

The interior is as impressive as the exterior, with a shipload of mahogany wood, beige leather, and gold colored trim. The Hongqi name is engraved on the panels atop the doors and there is another Golden Sunflower-logo in the center of the steering wheel. It has a traditional screen set-up with a separate screens for the instrument panel and infotainment, instead of a more modern integrated twin-screen.

The inner rim of the steering wheel controls the horn, again a nod to the good old days. Hongqi uses the same horn design on several of their other top-end cars.

The center stack rests on two gold colored pillars. More mahogany wood on the center tunnel. The air-conditioning knobs and clock are chrome-plated. I really like the trim pieces that connect the clock to the knobs.

The rear cabin has two captain seats with leg rests. Passengers can work or watch on their own screen. There is yet more wood and leather and an ultra wide center armrest with a Hongqi red flag ornament in the middle.

The Hongqi LS7 is mainly aimed at China’s super rich who prefer a high-end local brand over yet another German SUV. Ornate and over-the-top luxury and design is typically popular among Chinese entrepreneurs, and the Hongqi LS7 packs an overdose of that.

The LS7 is powered by a 4.0 liter turbocharged V8 engine. Output is 360 horses and 550 Nm, which doesn’t seem quite enough for a car of this size and with so much stuff on board. Hongqi hasn’t released the weight number but I bet it will be heavy. Hongqi claims a 200 km/h top speed for the LS7, which is barely acceptable compared to the competition. The LS7 will launch in Q3 with a base price of about 1.5 million yuan (236.000 USD).

The Hongqi LS7 is an impressive car inside and out. It looks brilliant in an old-school way, with loads of expensive luxuries and trim. However, the engine does let it down a little bit, as 375 horsepower simply doesn’t sound like a lot. Great car, needs more power.